I am getting this problem when i search for blitz games using the Blitz games -Auto-search buttom and in the -Create a custom game option.

When -Auto-searching, i end up having a normal live game with shorter periods, and when i create my own challenge, the default parameters in the -Create a custom game menu presents you with a shorter game but a game that is not considered a Blitz game in the Profile/Rank page.

I know i can create a Blitz game manually changing the parameters and create a 9 sec/turn simple period game for instance, and i saw another player games using blitz byo-yomi and fischer times.

So the problem is, someone please can teach what is the line that differentiates a Blitz game to a normal game?

Certainly is someone useful to someone who wants to know how to search for a blitz game, or even the devs maybe should consider calibrate the -Auto-search buttom to the slowest and above and changing the discrepancy from what a Blitz game is considered in the Rank page? And changing the default parameters in the -Create a custom game menu to giving you a real Blitz game, giving you the slowest time limit for it, not shorter periods normal live games.

I think is intuitively how this should work, or i missing something here? Thanks a lot for the help!

Games with strictly less than 10s per move (base time divided by 240 for 19x19 + increment) is considered blitz. Everything else with time per move smaller than 4 hours is live. The distinction is made by the time settings, not how fast both players actually played.

I don’t really like the distinction myself, but this seems to be the way it is.

Yeah i getting this tip from the automatch buttom (~10 s per move) but when you search from it gives you normal live with shorter periods and the default parameters for create a custom match menu also gives you normal live shorter games, makes no sense this discrepancy for what Blitz game were in the Profile/Rank menu, Thanks for the little guide, i don’t know if i understand what (base time divided by 240 for 19x19 + increment) means, but 10 sec or less for turn i got it. thanks for the help

This is a very old problem in a few cases and with a lot of agreement around it. (for some AST for ex, according to my memory )
Hope it will change.

I just tested it now, when you choose to create a custom match and choose blitz option it gives you:

and seems like the other types of time control is right too, so is only a problem with the default parameters in fischer time! cool, maybe when i use the automatch i was unlucky and got fischer time both times

I thought the automatch used fixed default settings not like custom match, but maybe I just never noticed before.

which I assume is the one used since it imports the function from ‘goban’.

I would want to do a bit of testing myself.

@flovo does this make sense to you? Or am I looking at the wrong bits of code.

I’ll have to do some tests later on, I can’t do it now.

This are the values I remember.

A while ago I made a pull request which removed the distinction between blitz/live in the create custom games dialog as a side effect, but it never got merged.

I just played a game with this time configuration choosing the blitz option in create a game menu Japanese Byo-Yomi: Clock starts with 10 seconds main time, followed by 5 10 seconds periods. 19x19 and was NOT considered a blitz game hahaha.

I don`t know what is going on anymore! this is uterlly confusing. but is sad that nobody has a anwser to this problem yet

ogs blitz is defined as less than 10 s per move, not less than or equal to. That confused me a lot until I realized

Oh yeah! that makes a lot of sense why is not marking as a blitz game, so it should not be the default settings when you choose the blitz option in the create a custom match right?

Thats the problem! fischer time comes with no real blitz time control too right? you can confirm that to me? what is the default times in your blitz options, because i`m pretty sure i search game in the automatch buttom and got normal live games!

Increments can be 10 tough? i need to know that too! Thanks a lot

Yes, the default settings are set up wrong, i.e. default “blitz” game is actually just a fast live game. If you want a true blitz game, you have to set very short time settings. I’m not 100% sure if the following will work but worth a try:

The Fischer above should work, but ends up being effectively the same as simple so may be easier to just use simple.

Byo-yomi and absolute are more compilated as you have to make an assumption about the expected total number of moves and I’m not sure what ogs assumes. EGF assume 240 moves in main time and 40 moves in overtime so you could try that as a start point but blitz is so fast it might be easier to just use simple.

may be easier to just use simple.

Probably not because “simple” is buggy and so you need to use work rounds like your Fischer one or seeing byo yomi with no main time to get the effect of simple timing of that’s what you want!

A question: What is the obsession with the label “blitz” on the first place?

(almost) each time this discussion comes up, I get the impression everyone involved is looking for a game labeled “blitz”, not for a game taking 2 minutes, 5, 10 30 minutes or an hour.

I’m not sure what ogs assumes

Main time spread over 240 + increment. The number of Byo-Yomi periods doesn’t matter. Canadian Byo-Yomi is divided by the number of moves in a period.

Who knew simple could be so complicated

What is the obsession with the label “blitz” on the first place?

I think it is fair to say that a game with ~ 10 s / move is very different from a game with ~ 30 s / move. The first has no time for reading so is mainly based on instinct while the latter has time for more reading. From my perspective, I think it is useful therefore to have the breakdown of ratings for these two types of games to measure my own progress and to assess the strength of opponents. The difficulty, of course, is where to draw the line between the two…

So I’ll play a bunch of unranked games to test out some time settings once and for all. Based on the bits of code I’m highlighting I’m going to pick some time control settings which should be borderline Blitz, and depending on whether it’s main-time/90+increment or main-time/240+increment we should get some results. I’m making a prediction on how they’ll be categorized and then logging the actual categorization.

This table only has 19x19 games

I think from game 3, 4 and 5, it’s likely that this division by 90 is just hardcoded in for some reason.

Here’s a list of guesses of what I think are the thresholds for Blitz settings irrespective of the board size. The only issue is that this is going by what the game history symbols are classifying as Blitz/Live as opposed to what the ratings algorithm might be doing.

Now I imagine since the various functions I highlighted are being imported, they aren’t randomly different for different aspects of the site but who knows. I was going to thrash my own rating by testing with rated games but so far I haven’t.

You can’t actually set more than 5mins main time in the Blitz settings of custom match so I’ve just left the table saying ≤5mins there.

I also expect Byo-yomi and Fischer to behave the same from the above code, I don’t think the cap on the main time is taken into account.

Here’s a game just to point out how absolutely ludicrous the method of classifying Live and Blitz games are at the moment. 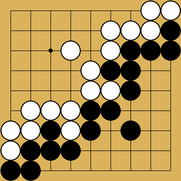