Bot resigned, did I do something wrong?!

Is this normal? I have no idea if it’s designed to do so or if it gave up on me.

P.S. Unrelated to previous topic I posted, I never actually paused the clock.

I cannot view the game, since it appears to be private.

Some bots will resign, if they estimate their winning probability to be very low.

If you think there might be a bug with the behavior of a particular bot, you may want to report it to the individual running that bot. I believe most of the bots on this site are operated and maintained by third parties.

How can I un-private it?

Oh, I have no idea, it was genuine curiosity. It was very early in the game and it seemed odd, that’s all.

Unrelated, thanks to everyone taking the time to maintain a bot, your labor is not unappreciated.

Yeah, I believe Amybot can resign if it feels too bad.

Did I do something wrong?

yeah, you played too well

How can I un-private it?

Once the game is private it can never be made completely public. You can however grant access to particular users or groups by clicking access settings at the top of the right hand side slide out gam menu

if it feels too bad

I swear I did not make any dad jokes in game chat!

Jokes aside, does it mean it’s a weak bot for me (unthinkable)? I’d like to play some bots, but I honestly don’t know what the takeaway was here.

does it mean it’s a weak bot for me

One game does not really mean much. If it starts happening on a regular basis, then yeah, it might be time to move to something (or someone) stronger.

So, it’s normal to resign that early in a game? A human could do that too?

Granted it means nothing about my strength, it probably read me playing this specific game strongly enough that it predicted it would lose? Simple as that.

(Sorry if I’m “A for Apple-ing” it, I want to make sure my tired brain gets it).

Bots resign when their estimated win chance % reaches a certain point. In this case she felt there was no chance to sufficiently reduce your massive centre. This is kinda unusual for Amy as she almost never resigns lol, other bots will do it more regularly but rest assured in this particular game you were dominating her quite heavily.

Would a human player also resign at that point?

Maybe not… But definitely possible. You have a very strong position, humans would be relying on you making a few big mistakes. Many would rather resign such a game and go try again in another, others will battle it out and try and force an error.

This is kinda unusual for Amy as she almost never resigns lol,

I can get Amybot to resign on a regular basis. There are even certain situations she prefers to resign from. It isn’t hard to make amy cry if you know which buttons to push 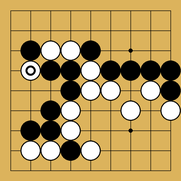 Tsk tsk tsk, where is your Christmas spirit?..

Tsk tsk tsk, where is your Christmas spirit?..

I didn’t mean to rain on your parade. I apologize if I came across that way

. My remark was more evident that I spent too many hours with Amy when I was first starting out. I got to the point where I didn’t enjoy playing with her anymore because I figured out ways to exploit (at least at her development 9 months ago) loopholes in her knowledge. I’m having a harder time making the 15K version resign. But if you give me a few days I’m sure I’ll figure out her weaknesses again

I meant about poor Amy, not me, LOL

You should treat bots nicely, you never know when the Rise of the Machines will become true…

It’s already happened. We live in a period of time we refer to as the “Digital Age”. Everyone is glued to their screens and people have anxiety and exhibit withdrawal symptoms when they temporarily lose access to their phones, tablets, laptops, etc… People are becoming more sedentary in the way they live their lives and our “connectedness” in the online world has been conclusively proven to weaken human bonds in the external world.

More than ever people are growing apart, isolating themselves outwardly, and an inner sense of being alone being reported in higher numbers than ever before by psychiatrists. And despite the fact that they are surrounded by more human connections in the digital world than ever previously possible. More and more facets of our lives are being integrated into the online landscape and more people are working from home than ever before.

Fast forward a 100 years and how far will this trend have gone? The birth of cheap and accessible virtual reality, where physical controls are abandoned, instead manipulated by direct neural transmissions, will most likely happen in that time. And like the internet of the modern day has ushered in the Digital Age, widespread use of virtual reality will signal the next. I could go on in far greater detail to a much greater length, but I imagine you get my point.

I think a common conception is that when the machines rise up that there will be some sort of war, like in Terminator or The Matrix. But the reality is that machines only but have to give us enough rope to hang ourselves with, and humans will willingly wait in line to trade cognitive freedoms for pleasure lined mental prisons