In two out of my current three in-progress correspondence games, every line of the in-game chat is displayed twice. (See screenshot below for an example.) This doesn’t seem to be happening with any of the completed games in my history, nor with new comments made to existing games. (i.e. it only seems to affect past comments in current games.) 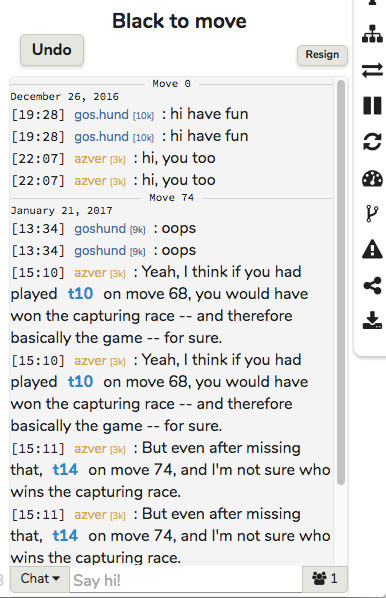 It happened to me as well

It had even tripled in one of my game but now it seems to be okay in that game again. Haven’t checked my other games yet.

Well, I do not see any messages in any of my game chats anymore.

… and really appreciate the new release

Was there a new release? fyi: I’m still seeing the doubled messages.

Rather interesting. If folks could post their affected games that’d be helpful in helping to identify a pattern and figure out where we screwed up - thanks!

If folks could post their affected games that’d be helpful

On the other hand, I’m pretty sure there was a greeting exchange in this game: https://online-go.com/game/5419888 and I do not see it anymore. Disappearing and then again reappearing messages are nothing new, though, I’ve seen that with v4 as well.

My two are games 7280203 and 7031718. (Note: the second one contains two messages posted after I discovered the doubling. I wanted to see if it would happen to a new post, and it didn’t.)

In this game, messages appear in triple time: I can’t see chat messages at all - not even the ones I write.