During the scoring phase, both players made sure all dead stones were marked correctly. In the score preview, the right side was all white territory. But when we clicked “Accept,” the game went from white winning 40 plus to black winning by 20.5. Whites entire right side registers as neutral. 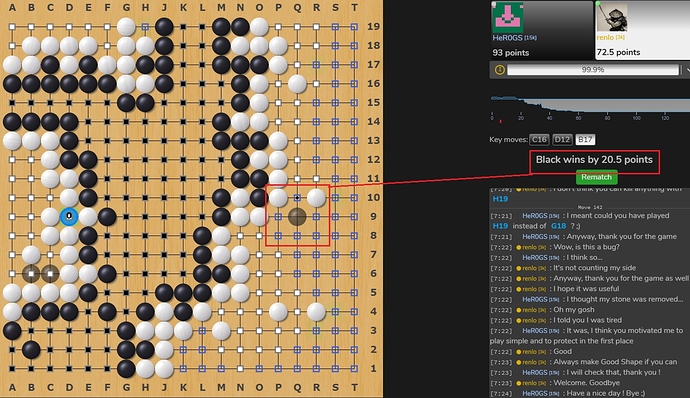 The Q9 stone is marked as capture. From the grave it turned 60+ white points into dust!

AdamR explained the problem in a similar report:

Nah, this is the fault of our scoring algorithm unfortunately, not the bot itself. Weird things can happen when there are unfinished borders sometimes, or on huge kills with lots of liberties. The game was not ranked, so hopefully no harm done, and I will file the example for future scoring improvements. Thanks for letting us know!

It’s been suggested that the scoring system should be replaced entirely.

In the meantime, I have a suggestion. The score preview should tell players what the final score is going to be before they click “Accept.” This could allow players a chance to “Cancel” scoring and play out the game to correct the territory. This should bypass the scoring bug.

Players should know what they are accepting. Maybe if losing players saw the score as they marked the dead stones they would just resign at the score preview window. This would be another the way to bypass the problem altogether. If players just resign, the bug can never occur.

Hmm, just so there is no misunderstanding

both players made sure all dead stones were marked correctly

Our scoring algorithm provides only the “preliminary” prediction, but when users change this prediction by clicking on some of the groups then it should always be the CURRENT state of the board what is accepted, not the algorithm version.

What I described in the linked thread was a bot case, where this phase does not go into play at all. I got the impression that you think that in your game the user accepted version was not the one to be accepted as result. As we are not currently swamped with reports about faulty scoring I am kind of hoping this is not the case.

Regarding the suggestions, I completely agree, but note that below the player’s names there is number of their points and this DOES change according to the current state of the board in the remove dead stones. So while it is not perfect, it might be close enough for you

I got the impression that you think that in your game the user accepted version was not the one to be accepted as result.

I think the initial post is reporting such an observation:

In the score preview, the right side was all white territory. But when we clicked “Accept,” the game went from white winning 40 plus to black winning by 20.5. Whites entire right side registers as neutral.

It’s really quite weird that the black stone seems to be marked dead, yet white’s territory is still nullified. What could cause that to happen?

At the time I sincerely believed this was the case. The board looked like a win for white in the preview and we made sure the stones were marked dead. Then when we clicked Accept the white territory we thought we saw in the preview window was basically all gone. How could this be?

If you look into the original picture I posted that stone is marked translucent.

The score preview process seems like it could potentially have multiple bugs. I offered suggestions on how the potential bugs in the score preview system could be avoided until it’s replaced altogether. Replacement is the solution, but rough edges could be smoothed out in the meantime.

The players should know what the scoring system thinks the final score is going to be. Thus giving them a chance to capture odd groups or play another move. In my view, the score preview system should explicitly say “Do you accept X score” before you finish the game. I’m not sure if the ‘Accept dead stones’ button has bugs, but my software testing intuition tells me this could be so.

In any case, I appreciate the reply. I appreciate all the work that goes into development. This seems like a tough problem to solve. My suggestions might not even be ideal, depending on how much work it will be to rework. Is it easier to replace the system or alter the current system fundamentally while we wait for the replacement? That may not an easy question to answer.

The players should know what the scoring system thinks the final score is going to be.

That’s already the case (with the exception of bot games). In the accept score phase, the score of both players is shown to both players. Both players can adjust the colour assignment for any point on the board. At this point, showing the final score difference is purely cosmetic, as the total score for each colour is already shown.

What you encounter here is a really rare bug, where the accepted board position doesn’t match the state after. For all I know, the algorithm is expected to be the same on the front and backend. In fact, it’s the first time someone reported it doesn’t always match.