I wasn’t sure if this is the right flare for finding bugs. But, I am confused about something, or maybe instead, might have found some weird bug on the custom games area “play” tab.

Otherwise, if I am wrong, please help me clarify on how the rank works.

I’m confused about accepting their games. There’s quite a bunch of “rank difference of more than 9 ranks” games. Which, I understand that a 16k opponent cannot accept a game hosted by a 5k. However, there are games that are within the the range of these 9 ranks that I would be able to accept, and still unavailable to accept games. I am a 17k rank-average player, and I find this strange because clearly the difference between 17k and 25k, for example, is 8, which is within the range of the 9 rank difference. So, I don’t know or see why this game cannot be accepted? 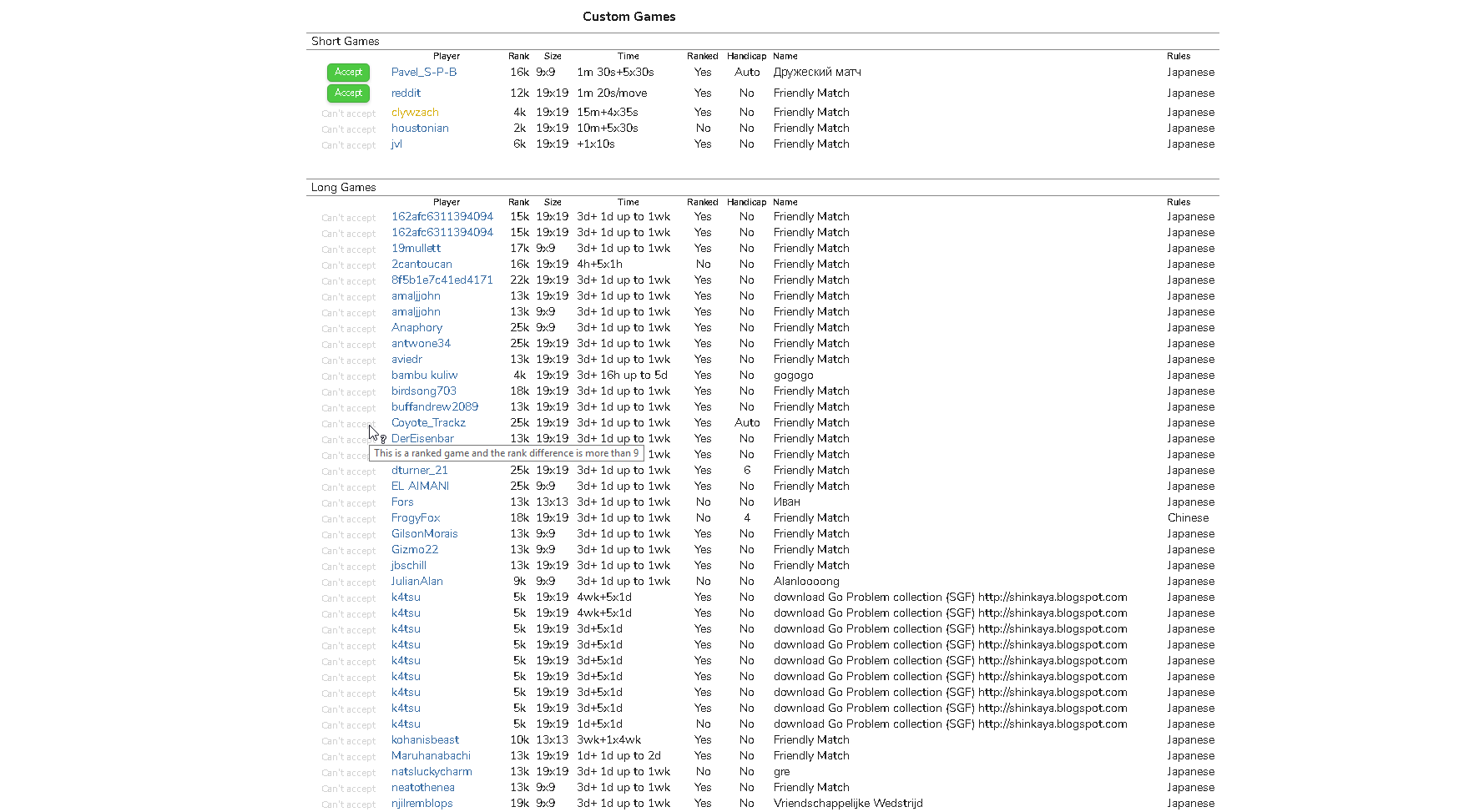 Another thing I found among those bunch of unacceptable games, is the maximum requirement being either 27k or absurdly TDK ranks. This, as well, I find very off about these games. Because normally new OGS accounts start like around 1500 ± 350? Or the lowest rank ever you can get in OGS is 25k anyway?

I came from the old OGS where you have the slider to pick what rank suits you best, so I wasn’t sure how the new rank works upon profile creation nowadays. So again, help me clarify this.

I don’t know, is it just me who can see this weird inability to accept games?

There are also bunch of open correspondence challenges with max rank of 127k. I don’t know how those challenges were created, and how to fix the them, but putting some max time for open challenges would help a lot on cleaning those.
Maybe like 7 days without challenge being accepted, and it’ll cancel itself out?

However, there are games that are within the the range of these 9 ranks that I would be able to accept, and still unavailable to accept games

Players can also define their own range. So if say the 25k player does not feel like playing someone stronger he/she can limit the range.

Another thing I found among those bunch of unacceptable games, is the maximum requirement being either 27k or absurdly TDK ranks

Nowadays when you create a new profile you ranked (within the system) as around 15k but your rank is displayed as a question mark. You then need to play several (like five?) games so the system can get an idea of where you belong before asigning you a real number.

These have separate control settings for rank ranges.

I wrote this up here:

Your picture shows you are confusing two separate things: Automatches Custom challenges. You are pointing from the Automatch settings and looking at custom matches available! The auto match settings have nothing to do with which custom games you can accept. Please notice that the list of games you have pictured is the list custom games. (It says so right above them) These are challenges that other players have created that anyone can accept if you are within the parameters that the creato…

This might answer the first part of your question.

The second part, about there being silly rank ranges, is a bug currently still open (27k etc) with no update from the devs that I’ve seen.

(Adam explained the other point, about new people being “15k?”. A feature that is deliberate, but causes no end of confusion and debate).

Players can also define their own range. So if say the 25k player does not feel like playing someone stronger he/she can limit the range.

These have separate control settings for rank ranges.

I notice the list I am looking at are custom games. My point of confusion is the contradiction of the “can’t accept” messages in the custom games list.

An example from the first picture, if a 25k opponent set the min and max rank to 23k-24k, then would’ve the correct “can’t accept” message, in a 17k perspective, be “max rank: 23k” instead of “ranked + difference of more than 9 ranks?”

If these players define a more limited range and create a custom game, then wouldn’t the correct “can’t accept” message would be based on the max rank threshold set by the creator of the custom game? Or why can it not be?

Yeah that is wierd - along with the buggy challenges there, this looks like part of that.

I wasn’t sure what would be a better title to describe this bug.
However, I find this bug very off and hope this can be fixed soon.