I agree with @KitsuneNoGo - this seems like a bug.

Just played a byo yomi game in zen mode. Just to be clear about what we are discussing, the number of periods remaining are missing. I believe this is important data and should probably be added to zen mode (although I’m not a heavy user of zen mode so I don’t really have a horse in this race)

Also, in the mean time, you might consider Fischer. The properties of the game are similar, but you should always have complete time information in zen mode.

This is why I use fischer on OGS.

Thanks, I moved this thread to bug reports hoping devs get into this

Thanks for opening the issue on the GitHub. I put in a PR tonight: Show number of byo-yomi periods in zen mode by benjaminpjones · Pull Request #1383 · online-go/online-go.com · GitHub

Note: the periods won’t show up until byo-yomi has started (when main time is exhausted). If you feel strongly about this, leave a comment here or on the PR!

IIRC there was a time it wasn’t… people are slowing draging feature by feature into “zen mode” until, I fear, one day it will just be “turn off chat” heh, maybe not even that…

Actually, no. Here I thought you had helpfully tracked down the original discussion thread, but no.

The reason none of this is slippery slope is that time was arguably one of the worst things they could have added anyway. It was never some benign thing that might eventually lead to negative results.

Arguably it might be on par with chat, but CERTAINLY it is worse than

including analyze mode or profile pictures

Ah I see what you are saying. I guess I was just responding to your comment “people are slowly dragging feature by feature into zen mode”. Really the only feature that has been added to zen mode was time (and number of captures). I understand the aversion, but also understand that time is a pretty critical aspect of the game as well, which is probably why users requested it in the first place (actual link this time).

And to offer a workaround: I just found out there are extensions which allow a user to add custom css to the page. If you’re open to that kind of thing, hiding the time controls should be trivial!

Yeah that’s fair. I could be mistaken but I seem to remember the forward and back arrows for analysis not being there once upon a time either… Though those are admittedly more minor than the clocks.

I think in my mind, zen mode is “just the board” and any steps away from that are losing something. 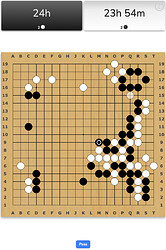 *blinks* I must be going mad…

Alright disregard haha. Seems it is just the clock and captures after all… Still disagreeable but hardly an avalanche of added features…

We could make everyone happy with a option tab for Zen mode in the settings.

Supercool! Thanks for modifying this so quickly. I am totally fine that they dont show up until main time is over. Zenmode here I come!