Can Black really get out of this? 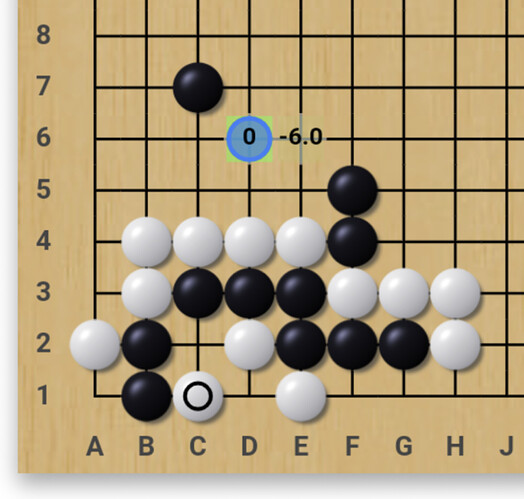 I (B) resigned here because I figured this was too big a loss in the opening against someone of equal or greater strength. However, AI says black is actually ahead 4025 pts after white plays inside, which leads me to believe black can still escape. I can see that the outside white stones don’t have an eye, but they seem to have so much more space. Can Black really get out? And if this is obvious to you, can you give me some pointers on what to look for/how to play this in the future?

Black is dead; there’s no doubt about that.

For us to evaluate the AI’s opinion of your winrate, we obviously need to see the rest of the board.

Actually, does the blue move function as a squeeze? Hmm, the semeai has to be read…

I can pretty much guarantee the drop in winrate is related to this local area, but here is the game: Play Go at online-go.com! | OGS

And yes, I believe it leads to a counting race, but I really don’t see how this is supposed to play out.

semeai has to be read…

Oh no i was hoping reading would not be involved

(joking, but in all honesty, this is beyond my reading level)

Hah, I explored the line a bit in Drago and realised how foolish I was initially.

My first two attempts at playing out the line have resulted in Black winning the semeai.

The key thing is to realise that Black has a lot more liberties than one thinks, because White has to cycle through the bulky five big eye.

Ah maybe I just need to play with it some then. I thought W b6 would get enough eyespace. Do you start with that?

The key thing is to realise that Black has a lot more liberties than one thinks, because White has to cycle through the bulky five big eye.

Ahh. Yes this is exactly the type of advice I was hoping for! I think that makes sense. 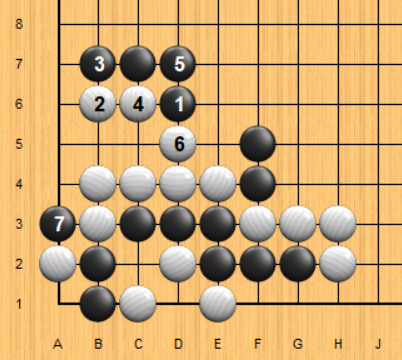 Something like that I think. Still hard to believe black wins that one!

Well, with the (7) shape this line would be some variety of step ko, advantageous for Black. White would have to win the ko multiple times in order to get time to fill Black’s inside liberties.

Perhaps Black doesn’t need to play (7) and allow that.

If black plays C2 (doesn’t need to quite yet, but let’s play it out that way for easier visualization) and white insists on keeping it killed, black has EIGHT liberties.

Try it out: black C2, white D1, black capture 4 stones, white plays back inside to stop black from living. Then black has:

EIGHT liberties is a lot. At the moment, white only has FIVE. (White needs to fill A3 and A1 themselves, so it is not their liberties, so all other liberties they have add of up 5). So white is behind by a lot of liberties. Will white B6 help? Yes. Is the result intuitively obvious, given that white has B6? Not unless you’re super-strong, which I’m not either. But, is it too early to resign? Yeah.

(Also keep in mind that moves that try to have white make eyes often result in losing liberties, because of the way white ends up needing to smuuush themselves against the stones surroundng them.)

By the way, once you get to the point of bugcat’s picture, it actually is pretty obvious to me after giving it some thought.

So actually in that particular diagram, it’s clear white has died. I think.

so I just need to remember

Appreciate the tips, it is definitely nice to have some stronger eyes on the puzzle!

I probably wouldn’t figure it out in a game.

I think Black has 7 liberties,

White’s 5 I think. White needs to fill a liberty to play atari in the corner.

When I put it like this, it sounds very simple, but as you can see it isn’t. I think even low-dan players regularly lose games this way, especially when there are complex situations present around the board.

Now it’s been figured out that it’s White who’s dead, the question a strong player would ask themselves is how many ko threats White has from the position, and the best order in which to play them.

Black leading by 25 means even if black messed up the capture race, the game was still playable if black built a wall out of this

Not necessarily related to the local position, but you can click on the AI’s three suggested “key moves” to see its variations. I’ve added them to the game chat