Can I have my home screen back, I mean the thumbnail for the games

It used to be thumbnail of the game, now it is just the game’s name and the player.
I want to see picture. That’s how I recognize my game.

Can you post a screenshot? It should still show the thumbnails. 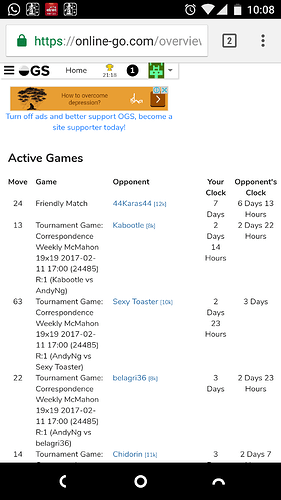 Ah, I seems to have find the answer.

Apparently, it seems because I have more than 10 games running, I have to go to setting and set “game thumbnail list threshold” to 25 and then it will show.

However, new problem: The list doesn’t show what games it’s my turn in! The highlighting used to work on both the list and the board images, but now it doesn’t seem to work in list mode anymore.

that was why i was so annoyed in the first place. I just see a list of games and don’t know which one was my turn to play.

new problem: The list doesn’t show what games it’s my turn in!

Pinging @anoek on this one.

If you have the game thumbnails showing, the player’s name for whose turn it is will appear in bold.

There did used to be a green highlight (both for the thumbnails and the list). This was much better, IMO.