Can someone explain how scoring estimate works for me?

consider this image from one of my last games: 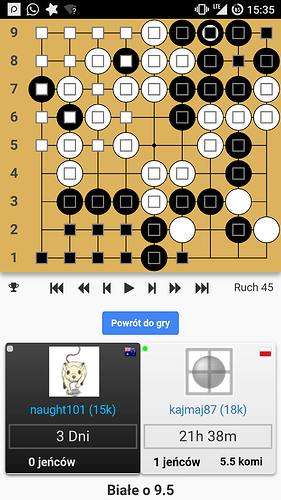 It says I’m winning by 9,5 points, but how? As I understand it, it counts the area, dead stones on the board, captured stones and komi. All of this is marked on the board and only marked spaces are counted.

So the score should be:

It seems the difference comes from caputred/dead stones, removing 4 from white gives 9,5 which is the result.

Why score estimate counts points differently then the endgame scoring? Am I missing something?

It is just a rough estimation. It is usually wrong and this is not the first time it has created confusion.
I just have to repeat that in my opinion score estimation should be removed.

I just have to repeat that in my opinion score estimation should be removed.

There is no score estimation on a real board. Using it online only teaches bad habits

Edit: not to mention the development time it takes to improve it

removing 4 from white gives 9,5 which is the result

I think it is because the estimator uses chinese rules (no matter what rules the game is played with) and in those (as far as I understand it) dead stones don’t matter (no points for them).

There is no score estimation on a real board. Using it online only teaches bad habits

Edit: not to mention the development time it takes to improve it

This is just you personal opinion.

Score estimator is a nice tool to have and probably needs a text: “chinese rules” or something like that (hovering text filed is OK too, no need to screw with UI).
Chinese rules suck. Maybe some shortcuts or something to make it easier to mark dead stones or area and then Japanese rule will be much easier to implement. No need to make it overly complicated or “smart”.

If Online-Go still uses their score estimator in github, then it works by simulating a lot of games starting from the board you want to estimate the score, and counting how many times each point in the board ends up belonging to each player. If it is above a certain margin, that point is given to that player; otherwise, it goes to no one. Note that in these simulations both players just play random moves.

So, the estimator might make mistakes (and it does, a lot, even for (almost) finished games!). For example, in this game, the estimator said my stones in the bottom right were dead. I marked them as alive, the other player refused the counting, I played one more move there, he resigned. This kind of problem happens frequently when there is only one point (or a few) where I could play to live, and a lot of points I could play that would kill myself, because the estimator just plays random positions: the probability of randomly playing in a position that kills me is much higher (in these cases) than the probability of playing where it must to make me alive.

Not a perfect estimator, but… it’s more than good enough.

Hi, thanks for all the answers.

I understand that this is an estimate, what I didn’t understand was that the spaces and captured stones marked by estimator do not match the points it counts. If it uses chinese rules, than it explains it, at least in this case.

I don’t understand why would it use rules other than those by which the game is played. If we already have some estimation (even the simplest one mentioned) of taken area and stones that are dead then counting them acorrding to chinese or japanese rules should be relatively simple.

I don’t understand why would it use rules other than those by which the game is played.

Because it makes more sense when there’s unsettled territory. Rather than worrying about life and death of boundary and intermediary groups, Chinese treats them the same as territory. It also leaves it unchanged for settling moves that might need to be played, and for groups with an uncertain fate. In the end, the vast majority of games (like 95%+ or something crazy high) have a very similar outcome in area and territory scoring anyway.