Can someone guide me? (Chinese fuseki)

On recommendation I recently started studying and going through the pro games to have a look and feel of the positions in fuseki, in my particular case Chinese fuseki.

But it is more difficult than I initially thought it could be. Understanding first 25-30 moves are really difficult. Can someone tell me what is happening during first 27 moves in following pro game? sgf also attached.

If someone could review only opening moves it would be nice. 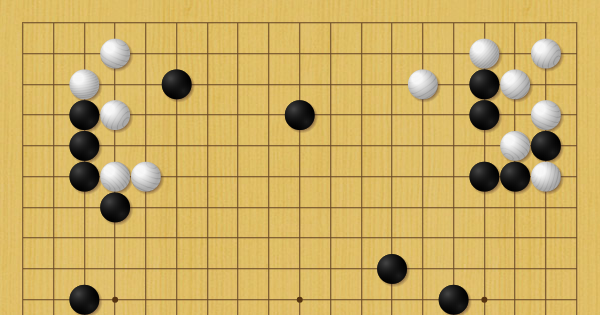 When people tell you to get a look and feel of the positions in a fuseki, I believe they mean it literally. So the idea is to review many games and get a feel for the shapes rather than try to get a deep understanding of a specific one. Especially when it’s a bit unconventional like in your example.

Thanks for your reply. Apart from your fourth point about F3, I was unaware of everything else. So it was really useful to me.

I am also planning to read kato’s book on Chinese fuseki, but Pro games are really very important if I want to understand fusekis better.

I am using this as my guide to study pro games: http://gooften.net/essays/tens-guide-to-studying-professional-games/

Right now I am focusing on two things stage1 and 2, joban and transition to chuban. Is it ok to study games like that, in parts?

I have played about 500 live/blitz games on various servers and rated around 15-17 kyu. Is it too early for me to study joseki/fuseki?

Spoiler alert, the Chinese fuseki is not so popular these days.

Start with this video:

I would recommend to review at least 100 moves in a game. Some fuseki moves only make sense later in the game.

You said “I have played about 500 live/blitz games on various servers and rated around 15-17 kyu. Is it too early for me to study joseki/fuseki?”

I am currently 8 kyu, so take my suggestions as less than fully expert.

In my view it is not too early to study some joseki, and it is also very helpful to work on life and death problems. But I believe the most important thing is to play slow games rather than blitz games, and to ask for comments from better players when you finish your games. Many people will be willing to spend 5 minutes pointing out a few things. If you wish, I will play a correspondence game with you, and will provide some comments afterwards. I will send you a challenge, which you can accept or refuse as you please.

Rather than study specific fuseki patterns, I would recommend working through two books available from Kiseido, at http://www.kiseidopublishing.com/go_books.htm. “In The Beginning” and “Attack and Defense” will help you understand the motivations that underlie the moves you will see in a fuseki pattern, which will make the study of fuseki more fruitful.

I’m still a DDK, so what do I know, but … I think that study of fuseki is premature at DDK, or at least premature as a main focus.

There is so much really solid quite straightforwards basic strategy that you can learn that propels you from 20k to 13k, and would surely be the basis for understanding fuseki and other full board play.

If you are still 17k after 500 games, that would appear to be an indication that the learning part of your play is not especially efficient (nothing wrong with playing a lot, but if you were aiming to improve, you should be able to be approaching SDK with this many games).

That in turn would appear to indicate that the focus of learning might not be right, for maximising rate of improvement.

This doesn’t mean don’t study pro games, or openings, or play fast. It just means that those things might not be the most efficient way to progress at this point.

If you want basics to progress through DDK, the thing that worked for me was Dwyrin’s Basic Series.

Lot of my games are on smaller boards, I initially started on larger board but started playing on 9-13 boards to learn few basic techniques. So a lot of my Initial large board games were just useless for any kind of gain or understanding of the game.

I am also an expert level chess player with more than 15,000 hours of play and 1,000 hours of study spanned over 10-15 years. So from that I think my progress in 2-3 months here is very satisfactory, or at least it appears so to me.

Though 10,000 hours rule is not very accurate or scientific, it could be true in many cases. I think using my previous experience with chess, I can adopt better study techniques and can reduce it to 5000 hours to Shodan. Of course with condition that I am good enough for that.

Spoiler alert, the Chinese fuseki is not so popular these days.

Thanks for the reply @SanDiego it was really helpful.

I think though it is refuted by AI, it still is playable against human opponents.

I am playing chess for last 20 years, and lot of moves that were refuted by chess engines were re-refuted (proved playable) by top players by taking help of those same engines! So I hope studying a little bit of it won’t do a big harm to my game, if it doesn’t improve it.

Although joban and chess openings are very different in nature, my chess experience could make it bit easier for me to study it formally as I have previous experience of doing that (studying chess openings formally). Thanks for your patience.

All study is good pretty much

It’s only a question of which study is most effective at which time. And that is a very personal thing.

And who knows - studying pro games now might be slower for apparent progress right now, but a more solid foundation in the end.

Also modern pro games are in general rarely very instructive. Even if they are somewhat outdated at this point, I’d recommend looking at older 20th century Japanese games. They are much easier to learn from regarding fuseki

I’d recommend looking at older 20th century Japanese games. They are much easier to learn from regarding fuseki

I am planning to read “appreciating famous games” by ohira and “invincible - games of shusaku” by John power after I finish about 1000 games on 19x19 board. Currently I am at about 150-200 games, so in about 12-15 months. Once I am done with basic josekis and fusekis.

And also, shinfuseki “go on go”

Both are overkill for DDK IMO to be honest

I’d say focus on learning the basics of opening theory, rather than studying specific fuseki. General rules would be things like “what’s the best way to respond to someone approaching me”, or “how should I respond to a splitting attack.” I find that I face general, principled opening play more often than I face specific fuseki like the Chinese openings.

In terms of general principles, you can pick some examples up from the game you provided:
-White approaches on the top. This is a big side, and it blocks the enclosure from black.
-Black approaches the top, left corner from the bottom because the top is the smallest of white’s sides, and because it’s an open corner.

Most of the rest is fairly complicated, and I’d recommend against using it as a basis for play. S18, for example, requires some fairly complicated reading to understand, and even at 3k-4k, I don’t have the value judgement abilities needed to assess it as being bigger than responding in the top left. Modern pro-level play, in genera, is super aggressive and complicated. Older, more peaceful and principled games are probably better for DDK learning.

Both are overkill for DDK IMO to be honest

Yes you are right, but I probably will be SDK after thousand so games, maybe. So that is ok, probably 20-25 months from now?

@ckersch88 thanks for the detailed explanation. I am far away from ‘reading’ at this stage. I have not given it any thoughts. I am still learning very basics but I am doing it more frequently and with formally studying few things. That way it helps me focus and concentrate better.