as I am new to Go and I don’t know anyone who can play it, I still have some questions regarding scoring. My main question is whether there can be territories within territories and if territories can overlap. See the picture I attached. How would you score that? 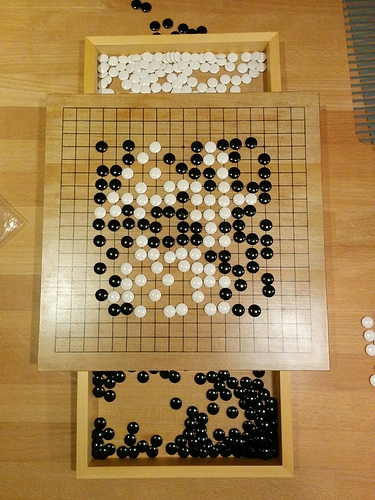 Thank you so much for your help!

There can be territories within territories - they are often called “dragons”, due to the shape they tend to form. Just like anything else, they have to have two eyes to avoid being captured.

Your board does not appear to have any territories within territories.

You can’t score go games until they are over.

This game isn’t over yet. The outcome appears to depend who’s move it is. There is an unfinished battle between white’s top group and the two upper black groups that are adjacent to it.

White needs both C10 and E2 to make two eyes for that group, which is not possible (even if it is white’s turn, black won’t let white have both of those).

Therefore, it will come down to the number of liberties white’s group has compared to either of the black groups. This in turn depends who’s turn it is. It’s quite hard to read, also - it’s a complicated situation. As beginners, either player could easily make a mistake and lose this battle.

This game is definitely determined by the outcome of that battle: other than the score for taking the huge number of prisoners from that, neither player has very many points, so that battle swings it.

If it’s black’s move, it looks like he can play C10, and then D11 B12 is forced, and white can falsify the eye on blacks other group, and then win since either black won’t have any eye, or he’ll have a false eye on G12 and white will be able to atari the H12 group with G11 and G13. Playing B12 immediately has the same result, more or less.

…Assuming that both players notice all of that. If black gets B12 and makes an eye, it’s probably seki. Unless white gets two eyes. Best to play it out.