I have recently read science-fiction novel “Starborne”, by Robert Silverberg, which heavily features the game of go.

There are a few games described in a surprising amount of detail, although it’s clear that the author is not a go player.

Here is an extract:
"
At move 141 he launches what he suspects is a hopeless attack, and his forces are easily crushed by Noelle within her own territory. A little while later he finds himself confronted with the classic cat-in-a-basket trap, by which he will lose a large group in the process of capturing one stone, and at move 196 he concedes that he has been beaten.
"

I had never heard this expression before. I have searched for it on senseis.xmp.net but couldn’t find a definition. Google is unable to help, due to the staggering number of pictures of cats in baskets that flood the Internet.

Has anyone heard this expression before?

By the description it sounds like it could be snapback, oiotoshi, or a particular shape that results in a snapback or oiotoshi, such as the crane’s nest.

My guess is it’s a 90s translation software gem.
Probably someone fluent in Chinese, Japanese or Korean would be able to piece together the expression?

Or just some artistic license by someone who

is not a go player.

That is the question indeed.

Or just some artistic license by someone who is not a go player.

Unlikely. All other descriptions of the games throughout the book are rather precise and show a great effort to stick to real go stuff.

Perhaps a colorful way of referring to a net? Remember, the setting is in the far future. Go terminology may have changed or expanded by then.

I’ve read a lot of Silverberg, but all of it before the late1970s. He’s virtually the last major SF writer from the 1950s.

Perhaps a colorful way of referring to a net?

A net wouldn’t be consistent with “by which he will lose a large group in the process of capturing one stone”.

Remember, the setting is in the far future. Go terminology may have changed or expanded by then.

Again, I disagree. Silverberg has shown great effort throughout the book of using real go terms and describing realistic go situations and games. There is no hint in the book that this one description might be made up.

The german term for snap back is ‘Mausefalle’ = mouse trap. Not really about cats, but maybe still related?

I’ve heard the expression “as much at ease as a cat in a basket” meaning trapped shut with just some wiggle room. (some british text I think)
I guess it could work as a metaphor for a player that got trapped with a few worthless moves available. 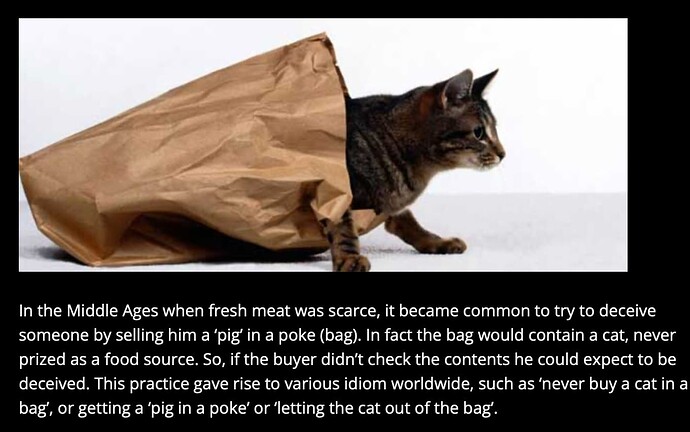 Wow, I never knew where that saying came from…

The online etymology dictionary (etymonline) is the internet's go-to source for quick and reliable accounts of the origin and history of English words, phrases, and idioms. It is professional enough to satisfy academic standards, but accessible...

Asking AI for some ideas… 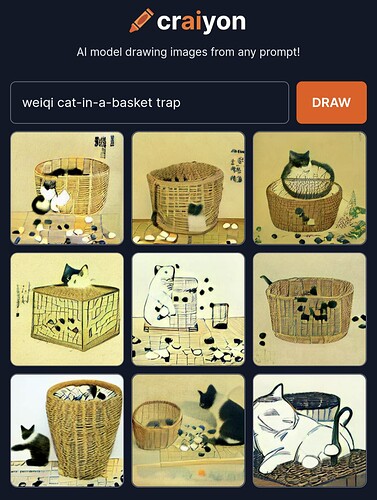 I looked up two of my favorite difficult words, and was not satisfied with its etymologies. This is reasonable, since I only tried two words, but what isn’t so reasonable is that there is no way provided to give any feedback to the author or to have a group discussion about what is stated there as fact. I would counsel caution about taking this source too seriously. I own a number of etymological dictionaries and have always looked words (or phrases) up in all of them. Frequently the etymologies are a bit different! Much seems to have been lost in the history of words, both for older and newer words.

What you say is quite true as a general rule. There are some etymologies that are very conflicted, making it important to think through the logic of the thing rather than taking the story at face value. I could give examples, but don’t feel like getting into an argument over the particulars.

However, the etymology that @Atorrante gave is very widely accepted, I think, and the phrase, with that meaning, is still in very common use in the U.S., particularly in the South.

A careful reading will reveal that I did not object to the etymology that @Atorrante gave. I objected to the website given.

Since doubt was raised about the resource, I thought it was worthwhile to make clear that the particular case is accurate. Also, some people may not realize how common the phrase is in the U.S.

I sometimes encounter the phrase “jiggery pokery”, and I’m now wondering about a possible connection to “pig in a poke”. Jigging a poke bag seems unlikely to work out well for all concerned parties.

You have inspired me to take a semi-Deep Dive on this. Look out. First, the multitudinous, varied, meanings of jig and its derivatives surprised me. For example, I had completely forgotten that a jigger is a measure of alcohol (my parents used to say that), leading to “not worth a jigger” (in Farmer and Henley [F&H], so fairly old). Second, the Shorter Oxford has nothing useful to contribute that can’t be gotten from the everyday dictionary.

Down to brass tacks now. Weirdly, jiggery pokery does not appear in Mencken, nor in the Dictionary of American Regional English (despite five pages of jig derivatives). My father would be mortified! This suggests that it may be very rare and/or of late origin in the U.S. However, I did notice that DARE lists jillpoke as a kind of snag in various forms, but particularly as a cause of a logjam in the timber industry. I find that use of poke intriguing.

Jig, meaning trickery, nonsense, and even a bawdy tale (Shakespere), has many examples from the 17th century (F&H). “The jig is up” (trickery) goes back to the 18th century per Partridge. Jig has also been used as a noun, “makes jigs of us,” in the sense of “fools” (1600, F&H). Jigging (jiggling) the jigger (a sorting device, familiar to miners as a jig)—Merriam-Webster—became a metaphor for dishonest manipulation (“don’t jigger the cards”). Ultimately, the source for jig as trickery or manipulation seems to lie in Old High German, giga = “fiddle,” which we still say to mean “don’t mess with that” (either incompetently or dishonestly).

Dictionaries like M-W and the Shorter Oxford typically derive jiggery pokery from a combination of Scottish and French words. That derivation is clearly unsatisfactory, telling us nothing about origin, but only about a station on the jig-family journey.

The most interesting result, to me, is that Partridge lists jiggery pokery as tailor slang for “underhand work” (c. 1880). This sounds like a professional inside joke based on a pun: underhand/underhanded. However, this Dive is still unsatisfactory to me, so I think there is merit in @fiddlehead’s speculation.

I appreciate your effort here. It turned up plenty of intriguing stuff even though the question remains. That said, I do find the tailoring reference convincing. I suppose there is a kind of natural progression (or regression?) from jigging clothing to jigging a poke sack.

The expression does seem rare indeed. I’ve seen it maybe two or three times, most recently during the Tom Brady deflated football affair, in 2015 I believe.