Is it fine to leave comments in chat about game moves, variations and positions during ranked game? Separate polls for correspondence and live.

Edit: to clarify: I mean leaving comments as a player (not spectator) in normal chat so opponent can see, uninvited.

Does the other stated, he wants those comments. How many comments?

Ok, I clarified some more but doesn’t mind the polls, the polls are just an invitation to a conversation. And in a conversation we can discuss all the options!

Basically during the game, especially correspondence, opponent can resign at any moment, and leave, and you won’t see each other ever again~ So If I notice something interesting, I drop some comments about it. Maybe opponent will answer or feel good about themselves because of a compliment I’ve given. But it can be seen as annoying as well, as an attempt to influence opponent’s line of thinking or behaving like you’ve already won.

So three questions I guess are: do you comment on the games while you’re playing them, how do you go about it, and how do you feel when opponent drops a comment.

I said yes because I give for granted that we are talking about polite comments, not bullying or shaming the opponent.

Usually I don’t comment other’s moves but it happened that I comment my own mistakes or oversights.
Last comment was “I need some vacation” after a silly mistake I made and just before resigning.

I do enjoy chatting with my opponents, no matter if its corr, live or irl, or if its ranked or unranked, i still like chatting while i am playing ^^

my favourite games involve some chat. it makes it more friendly amd takes the edge off of things.

if my opponent is not chatting then i stop. apart from the obligatory ‘thanks for the game’

I’m pretty sure if you ask forum users you will have quite a big bias as they are probably way more likely to want to discuss.

I don’t see a problem with chatting unless maybe it is a tournament game or something. If your opponent doesn’t like, you’ll find out soon enough. No harm done. But these days I don’t even get a “hello” from most of my opponents, so forget about chatting.

It’s a tough subjective question. I think it comes down to what the two players involved are okay with. Some pairs might prefer tons of chat, while others might wish to remain silent.

However, if there’s a difference of preferences, I think it is better to defer toward the preference of less chat.

Personally, I won’t initiate conversation and generally only say “Hello, have a good game” at the beginning and “Thank you for the game” at the end (I mainly just do this to avoid offending any that might expect this and I’m not offended if they say nothing in return). I think a small amount of friendly comments from my opponent acceptable, but I generally dislike discussing an ongoing game.

I didn’t answer the poll, because my answer would be “It depends.” I love chatting in a correspondence game with someone I know, but would hesitate to do so with a complete stranger. I wouldn’t do so in a timed live game, as it would be distracting, I think. However, last weekend at my IRL game, we stopped in the middle of an untimed 13x13 game to discuss a variation that didn’t occur because we wanted to do so while it was fresh. We both felt good about it, me for setting it up and him for avoiding it.

Is it fine to leave comments in chat about game moves, variations and positions during ranked game?

Actually the answer is “no” (depending what you mean).

The Terms of Service state that you are not allowed to receive assistance during a ranked game. Any specific comment about moves in the game in progress, and especially exploration of variations, is likely to lend assistance and is not allowed.

You are allowed to say “Oh, darn, that was a mistake” or “Oh, good move”, even though technically even these can lend assistance. Everyone knows that players will acknowledge each other’s moves, this is just polite conversation (*).

However, you are not allowed to say “Did you see that K10 would have been better” or “I was afraid of this variation”.

Put these things in Malkovitch, so they appear to your opponent the moment the game finishes.

*: My personal experience is that every time I do this, I regret it later. Either it wasn’t actually a mistake and I spot that after I said it, or some other reason to regret commenting on the actual state of play. Personally, I have found conversation during the game is best to be about non-game entirely, but that’s just me.

See, I knew someone would have different opinion. Personally, I feel saying

Did you see that K10 would have been better

The Terms of Service state that you are not allowed to receive assistance during a ranked game.

Ha, receive assistance, not give assistance. So I can complain about opponent receiving assistance even if it’s me who is giving it. 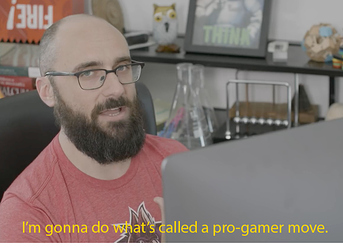 One of the outcomes of ranked games is to reflect the player’s skill.

If they receive assistance, even from their opponent, this doesn’t work.

That’s why teaching games are unranked.

The line has to be drawn somewhere, and the rules are clear.

I realised I might be answering a different question than this topic. I’m answering the question “is it allowed (OK)”.

The question might be “do you think it’s OK even if it’s not allowed, should we change the rules”.

Personally, I would oppose that also, because it is good to have clear lines, and changing it would blur the lines.

Isn’t there a distinct difference between discussing possible alternative outcomes to resolved positions and talking about undecided areas of the board? I don’t think many people would discuss future or current moves during a ranked game, but perhaps something like choice of local joseki after the fact or something of the like…

“Did you realise K10 would have been better” is an example of a comment about a past move that still draws attention to the future possibilities.

It’s a really slippery slope. If you want a “discussion about the game” game, why not play unranked?

If you want your opponent to see your comments before they leave. why not Malkovitch?

“Did you realise K10 would have been better” is an example of a comment about a past move that still draws attention to the future possibilities.

I vehemently disagree with this statement. if the position is settled, pointing out the missed opportunity at K10 is very different than discussing future moves or giving them advice.

This appears to be a very passionate position for you.

Can you elaborate on what is the problem? Why is it that during a competitive game, the players must be able to talk about it?

If you want a friendly chat, what’s wrong with unranked?

If you want a competition, so you play ranked, why do you think it’s OK to collaborate on the game with your opponent?

These are genuine understanding questions, not rhetoric to establish a contrary position.

No chatting about the game unless you know the opponents enough. Definitely no unsolicited advice.

True. At least “Argh that was a mistake” is talking about my own move, but unfortunately it prompts the opponent to think about why.

In my opinion our current rules (and interpretation) allow you to say that. Primariily because in real life you are allowed to grimace.

However, in a real life competition you are not allowed to say “did you think about K10”, and I think that applies to ranked here.