Check this infinite looking game I'm playing...! Is it a no-result? 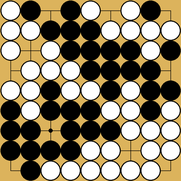 I have never encountered this before. Is this triple ko? Is it the same as seki?

Im not an expert on this sort of situation by any means. But i know that tournament rules will probs say that this is a no result game because of the nature of the triple KO.

But there is also the Super KO rules that say: They forbid repeating a “state of the game”, where different variants include different factors in the state.

But what would ususally happen is one of two things… The person with the most points not including the points of the triple Ko i think, would win. If that were not the case then Lightening games have been considered, and the last game ruled a no result.

So in your case here, White would win: Black 13-- White 25.5 points. Even without prisoners, white still wins.

That is how i would rule it. But again, im going on what i know, and have managed to read in the last five mins.

I don’t know the actual answer either, but note that different rulesets have different rules for the situation! So whatever the answer is, it might depend on that!

It was descided that it was a White Victory.

The game was played using Japanese rules, so those are the rules that our wonderful mods had to have used. It was fascinating though.

I adjudicated the game and will explain my decision here.

It starts with the ruleset: Japanese Rules (found here).

Atricle 7, subdivision 2, provides “In the confirmation of life and death after the game stops in Article 9, recapturing in the same ko is prohibited.”

Note that this would not be possible if both groups were eyeless, in which case neither player will ever pass to end the game under Article 9, and the No Result rule under Article 12 for repeating whole-board positions would come into play.

I really really find this kinda thing super interesting (Because I’m in to boring things like this). I have to say that the while thing is utterly fascinating.

I arrived at the same result, but in a much less eloquent way i think. I went down the root of, who has the most points, if you cant count the points of the KO. And the answer was white.

Though, i personally think that there should be some kind of OGS ruling that makes a descision faster in this situation, rather than risking it being a no result game, which in and of itself is a rarity in the pro go community. But it still does happen.

But for the purpose of OGS, i think that a ruling based on points should be implamented in the future, just to avoide a no result situation coming up. Unless of course the points too close to call. Which is another problem one should consider i think. But if there is a suitable margin of points between white and black in a given game, then the one with the more points should have the game. At lest this way there is less unnessisary deliberation in the future.

Yes, very interesting. I couldn’t reconcile the result until I realised that Black had no choice but to pass at move 99 (something he avoided doing at 95 with a filling move) and White was free to (and did) pass at 100.

There was no opportunity for Black to create an endless cycle of moves that didn’t include passes. While I like the idea of draws, I agree this wasn’t (and shouldn’t) be one.

I completely agree with you on that one my dude.

There was no opportunity for Black to create an endless cycle of moves that didn’t include passes.

I agree this wasn’t (and shouldn’t) be one.

Edit: Spesifically these were the points i agreed on.

While I like the idea of draws, I agree this wasn’t (and shouldn’t) be one.

I too like ties (for integer komi) and draws (for infinite loops) but also agree that in this situation that is not the case.

I’m happy to have played a triple ko game…
To my knowledge, I’ve not met anyone else who has ever had one!

I wonder how rare they are, precisely.

I would like to see a genuine (not fabricated) 9x9 triple-ko game that IS legitimately a draw under Japanese rules. Can anyone post one?

They are not, strictly speaking, uncommon. But i dont think one has ever happned in my games and lasted. If it has, i would liely have given up the Ko and continued play.

@Kosh That would be a difficult thing to produce i think. Not just because of the size of the board, but the complexity of the given situation, then limited to only a nine by nine board.

But then, i also do not think it likely that a draw would happen. In the Japanese rules, a no regult game can only happen if both players accept that it is a no result game. And in that situation, a “Lightening” game is played for the result… according to the informaitons i read on Sensies library.

I know that a no result requires agreement from both players but I bet my opponent would have agreed after several years of an infinite loop.

It guess it really comes down to the whole board position too. If a game has this sort of Ko in it, and it occured in the middle game, it would continue to dictate the flow of the game for the rest of the game, but it has a strategic value equal to both players.

But there is some ambiguity in there i feel, just as you said. However, for the purposes of OGS, and the act that we are not a pro tournament standard site typically… (With the exception of the transatalantic championship, which had its own dedicated team of referees, and pro players to confure.) OGS simply Does not, and in my opinion should not aim to spend a great deal of time on these descision, and for the soul purpose of the site, should make its own rules, based on the relevent rule sets in each given set of rules, to then be able to make fair judgements, both quickly and fairly I think.

Also getting rid of ambiguity can only be a good thing, so long as the result is one that is fair on both players in the long run.

Honinbo Sansa played a famous historical game involving a triple ko in 1582, against his rival Kashio Rigen. The game was played in the presence of Warlord Nobunaga at a monastery in Kyoto. Due to a triple ko, the game was suspended without result. The next day Nobunaga’s ally Akechi Mitsuhide rebelled, surrounded the temple, and killed Nobunaga. After this, a triple ko was considered bad luck.

It was also said, that if the triple Ko came up in a game, it meant both great missfortune, and was even considered an omen of death by some.

I actually rescently read up on that game, less than a week ago actually. Super interesting.

So if you are good enough to see it coming, does that mean you can see the future? And then can you avert your imminent death by avoiding the triple Ko? Very interesting!

I think with sifficuent reeding, sure, one could predict a triple Ko, at least as a possibility in a life and death situation. It’s reasonable to assume that a pro-player could see a triple Ko, especially as they frankly have inhuman reading abilities.

One could, in theory, try to initiate a triple Ko, in the hope of a no result game, if they think that they are going to lose the game they are currently playing. But then it would come down to the opponant to either, play in to it, or try their best to try to avoid it.

Sometimes, it’s going to be an inevitability given the right circumstances. Personally… I’m not a huge fan of playing Ko anyways. usually, i will try to avoid a KO, if i think i can get something better out of the board by sacrificing, or mitigating the damage taken by loosing a Ko. Sometimes, however, you gotta Ko, when you gotta Ko.

Some Ko’s are super fun to paly though so im not really against Ko. I just end up losing them too often, so i avoid them when i can.

There is even a diagram in the examples below the commentary on the rules which depicts this exact type of situation and supports your interpretation.

Life-and-Death Example 8: triple ko with an eye on one side

Black’s nine stones are dead and White’s ten are alive. {I would not call this a “real” triple ko, because the three kos are not all between the same two groups. --wjh}

Based on rules Article 7, there are no global ko threats in scoring, not even from double ko. So black will never “catch his breath” to recapture the outside ko at B9.