Chinese Go in the 19th Century

Does anyone know anything about this?

With this in my mind, I remarked that I wasn’t aware of any notable Chinese players between Fan / Shi and Go Seigen 吳清源 (1914–2014). Trevoke said that there must surely have been some, so I went looking on Sensei’s Library, especially on the Go History page.

Another strong player listed is Guo Tisheng 过惕生 (1907-89), who won the first Chinese National Championship in 1956 and also in 1962, and was the teacher of Nie Weiping 聂卫平 (1952–). According to SL, he was grouped with Liu Dihuai 刘棣怀 (1897–1979) as the South Liu North Guo 南刘北过, the two being the strongest players of the Republic.

Still, though, none of these players would have been active at a high level in the 1800s. Can we go back further?

A key thing is to understand is that the Chinese, for obvious reasons, have not traditionally used the BC / AD, or BCE / CE, system, preferring to describe their history mainly by what dynasty was in control. The relevant dynasty here is China’s final, the Qing Dynasty 大清 (1636–~1912). Thus 19th Century players may be described ambiguously as of the “late Qing dynasty” or even just “Qing dynasty”. SL has a page on players of the Qing dynasty.

Chen Zixian is described as “one of the strongest players of the late Qing dynasty”. Fan Junfu is specified only as “Qing dynasty”, as is Xu Zaizhong. SL also gives this list of a hundred Qing dynasty players, but the dates of their lives or careers are not given.

So, at present I don’t know of a single important Chinese Go player or group confirmed to have been active in the 19th Century, although it seems likely that Chen Zixian was. Could anyone help me remedy that?

Ah, I’ve just remembered an article I once read in the British Go Journal.

It was a Western account of Chinese Go by a British diplomat, in the 19th Century. I’ll go in search of it, although I think it is still in members-only viewing.

I don’t speak Chinese; could you elucidate?

We Chinese don’t even care, why do you? Lol

My mistake: the relevant article (BGJ Spring 2020, pg. 8, Harry Parkes by Donald A. Campbell), is about the diplomatic and military career of Harry Parkes in China 1841-~65, and his subsequent interaction with the Go community of Japan.

There’s no mention whatsoever of Go in China.

@bugcat actually, this is a quote from Cien años de soledad in chinese, something like: past is all fake… only loneliness lasts.

See I can be deep too sometimes.

Zhou Xiaosong is a name often mentioned. He’s known as the last Guoshou

I ran a search on SL.

It doesn’t have a dedicated article and only mentions him in passing.

He’s apparently featured in the book Guoshous at the Golden Age, which is the fourteenth volume of Chen Zude’s Ancient Chinese Go Games with Detailed Commentary series.

Whilst listing him as a guoshou, it makes the (controversial, I guess) suggestion that Gu Shuiru was one as well.

Oh, I missed a word. He’s known as the last “Great Guoshou”. Zhou is considered the strongest player after Huang, Shi and Fan in Qing dynasty.

Gu Shuiru was a guoshou I think. He was top 2 player at his peak so I don’t know who is a guoshou if he wasn’t.

Do you have any resources to read more about Zhou?

Or are they all in Chinese? It’d be good to at least have his hanzi.

All I can find is in Chinese. I’m not an expert at ancient Chinese Go history (nor am I at Japanese). What I’ve read so far is the first few links after googling his (Chinese) name 周小松. 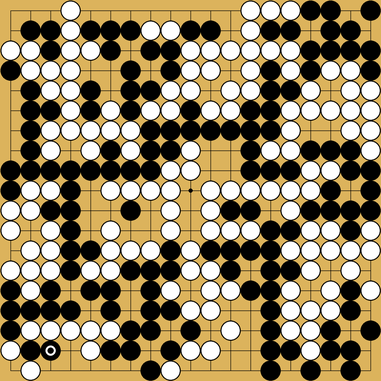 A game between Zhou and Chen which Zhou himself was very proud of.

There is a heated discussion about this game recently in Chinese online Go community. Someone analyzed the game with Katago and found 吻合度 was very high. Roughly 吻合度 is (the number of moves that AI approves) / (the total number of moves). They thought this implied Zhou and Chen were super strong, likely as strong as top players today. Some others argue that one single game doesn’t mean much and it’s questionable whether 吻合度 is correlated to a player’s strength.

AFAIK, 吻合度 is something first implemented in lizzieyzy and is officially translated into accuracy. Lizzieyzy is a lizzie mod which is popular in Chinese go community. It can be found on Github. I have never used lizzie so far so I might be wrong.

Someone analyzed the game with Katago and found 吻合度 was very high. Roughly 吻合度 is (the number of moves that AI approves) / (the total number of moves).

Any other old historical players who play games approved by AI? I remember there were a threads by John Fairbairn about this on life in 19x19 forum.

Well, any game is approved by AI more or less. I don’t think one can find a game where AI disapproves any move. If you are talking about historical games that AI thinks are as high-quality as today’s pro games, then yes.

Following the discussion about the Zhou vs Chen game, a Chinese pro Cui Can 5P did some research. He analyzed about 50 Chinese historical games and 270 moderns ones. Historical players involved are Guo Tisheng, Zhou Donghou, Liang Weijin, Cheng Lanru, Huang, Shi, Fan, Zhou Xiaosong, Chen Zixian. Modern games are all the final games of all the international competitions from 1988 to 2016. The conclusion so far is in the dimension of accuracy, there is no significant difference between those historical players and modern top pros. There are some other important details in Cui’s original article I can’t cover here, such as the reason why he selected those games and how he set up his Katago.

So back to your question, games of the historical players I mentioned above are considered good in general by AI.

Do you know what the original ruleset was?

I imagine there was no komi, but was there a group tax?

This isn’t the perfect thread for it (Huang was a 17th-century player, perhaps lasting barely into the 1700s), but I wanted to highlight an intriguing comment by Fairbairn on L19.

If I look back on a long go career, some of the things that I would list as highlights, in special order, would be: the atom bomb, New Fuseki, AlphaGo, the friendship between Genjo and Chitoku, Huang Longshi and his alleged murder, Shuwa coping with the fall of the Shogunate, Go Seigen, Tibetan go, sunjang baduk, traditional Japanese go boards (lined using swords), go manuals going back over 1,000 years, go in the Cultural Revolution, go for blind people.

Fairbairn wrote a biography of Huang, which probably contains that information, but my current internet stopgap refuses to access archive.org so I’m left in the dark.

Pinging @Trevoke since he streams Huang Longshi games once a week and I’m sure he’d be interested.

I finally looked into this.

In [Huang]'s last years he was a house guest of Xu Xingyou … If once in a while Xu won a game he would repeatedly brag about it to his guests. …

There is a story in the biographies given in the “Ji Qing Xia Guan Yi Xuan” that Xu contrived Huang’s death by seducing him with rich wine and beautiful women. At the beginning he could cope but as the days increased it was difficult for him to stay on top and eventually he died of a stroke. …

There are good grounds for doubting this story, though it seems he did not pass the age of 40 by much. Lu Shichuan, for one, in “Yi Xuan Yi Hua” found it unconvincing. …

To get closer to the truth we should observe first that Huang and Xu were in a teacher-pupil relationship. In his Jianshan-tang Yipu, where he does not shrink from scathing comments about other players, Xu is very flattering in what he says about Huang. Moreover, there is no reason why they should fight for fame at court for no players were employed at court in Qing times.