game in question is this 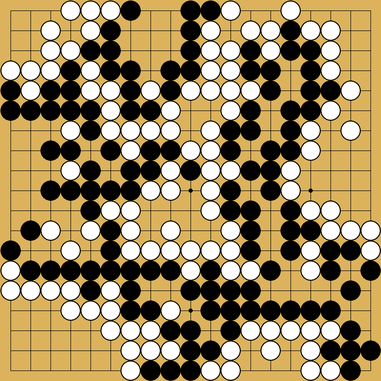 it’s chinese rule, and i was given 2 stones handicap. komi is 0.5 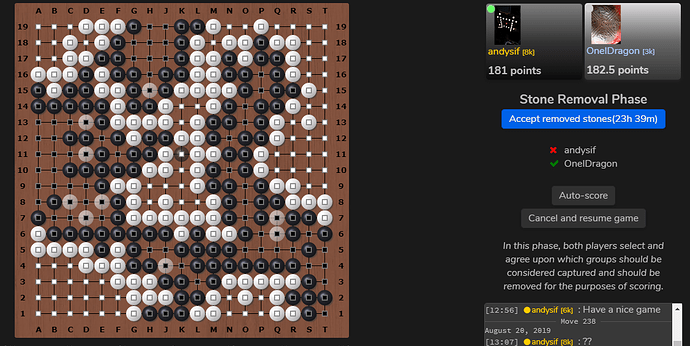 Yeah this is expected. The handicap received by black is only supposed to be the influence of the stones, but because in Chinese stones count as points, white gets 2 points to bring the difference back down to 0. Black keeps the influence but the score remains balanced. Just means final score at the end is off, as you noticed.

Yeah this is expected.

as in the 2 handicap doesn’t count toward black?

i dropped 2 ranks and he rose 1 during the game. LOL
but all in all, it’s a good game.

I think I like NZ rules the best, especially their natural allowance for drawn games by having integer komi, but I find it weird that they don’t compensate handicap points like Chinese does…

I guess for any sufficient strength gap where n handicap stones should be awarded, n points either way is unlikely to make a significant difference… so maybe they just thought it was less complicated to leave it out than to explain black gets n stones but white gets n points.

Giving someone n stones handicap and asking for n points in return is just haggling.

“I’m significantly better than you at this game, so I’m gonna pass a bunch of times at the start… but in exchange I want a point for each time I do that”

and very “unintuitive” to someone not familiar with the rule, to say the least. who would have thought a handicap that is “given” to you would be “taken back” at the end?

and if this must be done, a better way to do it would be to include it in the komi, so it would be less of a surprise.

“I’m significantly better than you at this game, so I’m gonna pass a bunch of times at the start… but in exchange I want a point for each time I do that”

I think it’s more to do with whether territory scoring or area scoring are being used.

No, Chinese and New Zealand both use area scoring. In Chinese white gets gets points equal to blacks handicap so the score is even, in New Zealand black gets the stones and the points (assuming the stones live)

The intention behind that rule is so that the size of the handicap itself is the same, whether playing with territory scoring and with area scoring, not so much that the absolute difference itself is important.

Since chinese rules give those extra point but territory does not, an N stone handicap is “N points larger” when using chinese score. According to a (completely unreliable but let’s take it to be ok for the sake of the argument) classic rough estimate, “a handicap stone is about 10 points worth”. So, “8 handicap chinese” would be almost as large as “9 handicap japanese”. I assume that specially if you are using handicap games for ranking computation, this difference complicates the math and would be confusing to people.