the last thread i found about this topic is a fews years old. i want to see if there is any update.

Shows how many games waiting for you

i tried them both but there seems to be a catch, namely that you have to open ogs in a background tab for them to work, ie, you won’t get any notice if ogs is not opened.

i don’t know how things were done back in the days when these extensions were written, but as of now, the ogs tab already has a number that shows how many games are waiting, so if you have to have it opened for the notifier to work then it is quite pointless.

Or did i miss something and the extension is supposed to work without ogs in the background?

Let me get that right. You want to run code in your browser which communicates with a website without your knowledge?

You know, I’d recommend you check the ‘email notification when it’s my turn to move’ box on the settings page.

Seems its very much WITH his kowledge

Andysif: This is the perfect opportunity to get into coding yo! =D

You want to run code in your browser which communicates with a website without your knowledge?

without my knowledge, yes, but that doesn’t mean without my permission. I specifically request this by going to the chrome store and installing the app, so it’s doing exactly what i wanted.

just for comparison, many gmail notifier is doing just that, checking whether you got email, running in the background, without having to open the gmail page.

Which is why I don’t let it.

This is the perfect opportunity to get into coding yo! =D

haven’t touched them since high school, although i would like to learn.

Which is why I don’t let it.

just wondering, for academic purpose, how can you “not let it” from the server side?
the worst they could do is mimic to open a page and read from the header.

edited: or do you mean you don’t like to have them installed?

The point of it is that in the chrome status bar you can see when a new turn comes along - that doesn’t seem pointless.

Nevermind me, I don’t even use Chrome. :3 Sorry for derailing.

glad you said that. that’s how i expected it to work.

but somehow it’s not working on my computer.

edited: never mind. i went to the “extension” section of chrome and found that I need to check a few options, lets try that and see if it works.
but i would prefer that the extension would have make the changes when it is installed.

still doesn’t work for me.

the 2nd line which indicate access to specific site is greyed out unless i am actually in the ogs tab. 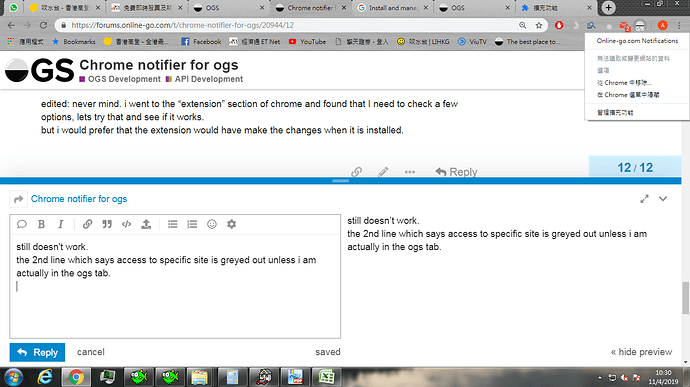 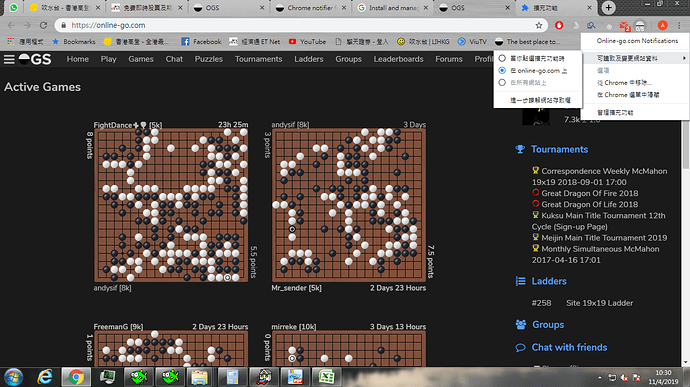 I have already checked the access right in the extension setting. 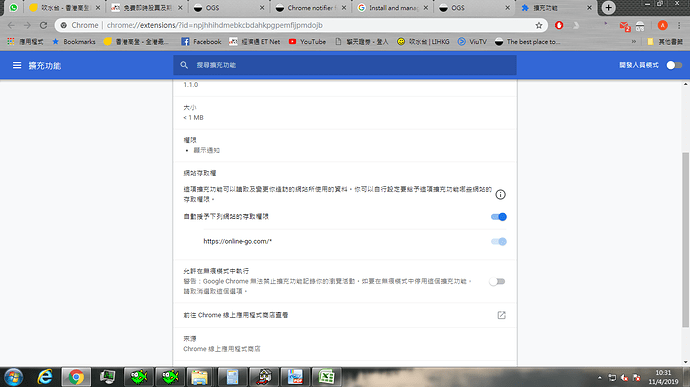 would appreciate any help.

I can’t tell from your screenshots what is “not working”. At all times, it appears to be saying that you have 0 games out of 8 waiting for a turn. Is that incorrect?

I can’t tell from your screenshots what is “not working”. At all times, it appears to be saying that you have 0 games out of 8 waiting for a turn. Is that incorrect?

it just happened that i am trying to get the extension to work while i don’t have any games waiting.

I THINK, if working properly, the extension should show that it is allowed to access ogs even if it is on some other page, meaning in the 1st screen shot it SHOULD show access like the 2nd screen shot.
and because currently it is not allowed access when it is not in ogs, it can’t show how many games are waiting.

That icon is not saying it does not have access

When it doesn’t have access, it displays the symbol without any numbers in it, instead an exclamation mark. After I log out my browser from OGS: 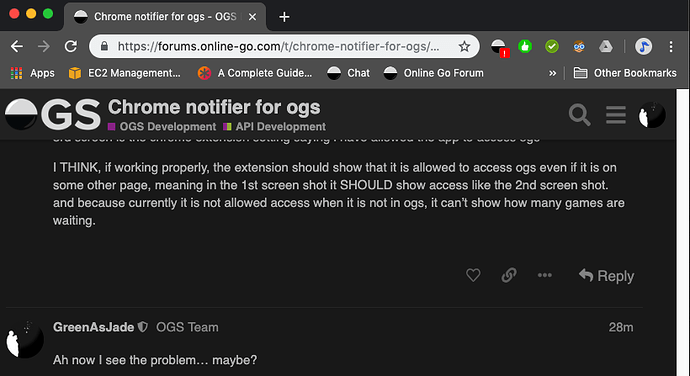 When it has access, it knows who you are and how many games you have, and it displays them.

It’s grey because it’s boring: no games to play.

If you try it when you have some, you will see that the numbers are on a green background (IIRC, I have none myself right now!)

The little pop up that says “it has access to this site” is just telling you that the site on the current tab is the one that it is reading (as opposed, say, to the beta site).

Um, what can i say, for some reason it is OK now.

But trust me, I have tried everything yesterday and nothing works.

Something must have changed … both have access to OGS, but no number … this began some time this year, IIRC, perhaps 5 months ago or so? I remember something was changed here but cannot recall what it was.

Yeah, ironically not long after this thread, I began to have problems like andysif described, and uninstalled it.

For @Traveller’s plugin there’s a github repository, so maybe somebody could take it up?