Someone asked me to review a great game between Honinbo Dosaku and Ogawa Doteki, played in December 1682.
So I made that review for him, and I’d also like to share it with others who might be interested. 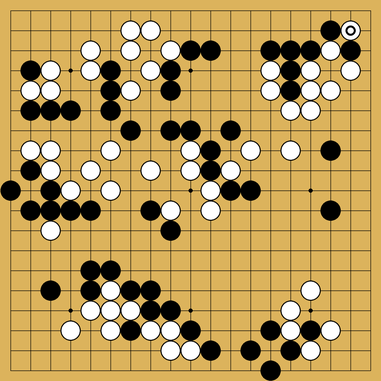 Doteki was a student of Honinbo Dosaku. He was a great prodigy, destined to outgrow his teacher and become Meijin, if he had lived long enough. But unfortunately he died at age 21.

Caveats: This is ofcourse not a professional commentary, so my review may contain mistakes. I did use KataGo to help out a bit.

I persuaded @Trevoke (8k) to review one (or was it both?) of the Doteki–Dosaku games on stream a month or so ago, since he reviews a few Dosaku games in a dedicated stream session once a week (and has been doing so for quite a while)…

He had the impression that Dosaku was playing a little gently and that they were teaching games, pointing out a few points at which he thought that Dosaku didn’t apply as much pressure as he would’ve expected to see.

I found his argument fairly persuasive, but of course we’re both merely kyu players. I noted that shortly afterwards Doteki lost heavily (10+ pt) to Chitetsu.

It’ll be interesting to compare your point of view.

It’ll be interesting to compare your point of view.

I’m not strong enough to judge that with any confidence.
I can see that the AI thinks white played better overall, but it also seems like white made somewhat dubious moves every now and then, that allowed black to increase his no-komi lead again. For example in the fight in the upper left (move 50-64) and in the fight in the center (move 118-126).
To pinpoint the exact mistakes, I may need to let KataGo analyze more deeply than I did.

But I have no way of telling if those white mistakes were on purpose or not. I’m not a Dosaku expert.

In any case, thank you for your work!

I wasn’t aware that this move by Black in the 5-4 joseki had fallen foul of AI.

Hmm, it was probably discussed a year ago in the early stages of the Democratic Game, since White played the outside attachment in the top right. We played the modern joseki in that game, of course.

I’m not surprised that White cut on the outside, btw, since this position looks quite easy to play as Black with no komi, continuing with moves like A, B, C, or D. 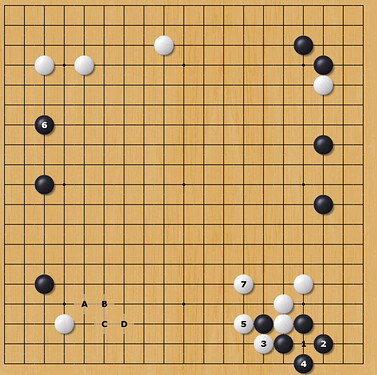 Oh, I just realised that my inside cut variation was in the review! Hah.

I didn’t see that you’d supplied an inside cut line.

I made the review for a DDK player who just had a few question about the game, so I tried to stick to the bigger picture and not go into many details 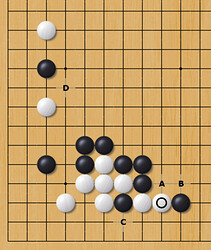 This is a nice little position.

Black plays A, maintaining the threat of C and preventing White from getting first to D. If I were careless, I’d play the “good shape move” at B (noting that White can’t cut) and lose sente.

White’s peep still feels like a bad exchange and white (1) feels kind of slow to me. After all, white can still link up even if black invades.

Also, why would black play the kosumi (2)? Taking a liberty by blocking would be better shape for black and it would create some aji in the corner (3-3 attachment).
After black plays that slowish kosumi, I would not feel obliged as white to save that stone on the upper side. It seems fairly small and quite heavy to save it with (3). Better to sacrifice and make black overconcentrated.
Making some flexible shape in the upper right with the shoulder hit at O15 feels bigger and more urgent to me.

@gennan how would you like me to add comments re: the review or the game? I am still kyu but as @bugcat mentioned I’ve gone through ~70 Dosaku games so far so I kinda know his style and the style of the era, so I may have some color I can add.

I’m inexperienced with OGS’ review system, so I don’t know if and how that works. But please feel free to add comments.
Thank you in advance!