Tucked away in an answer to a question about creating challenges, I tried to show the person what the buttons actually mean by rearranging them.

It strikes me that the arrangement that I came up with might actually be something that would improve the page: 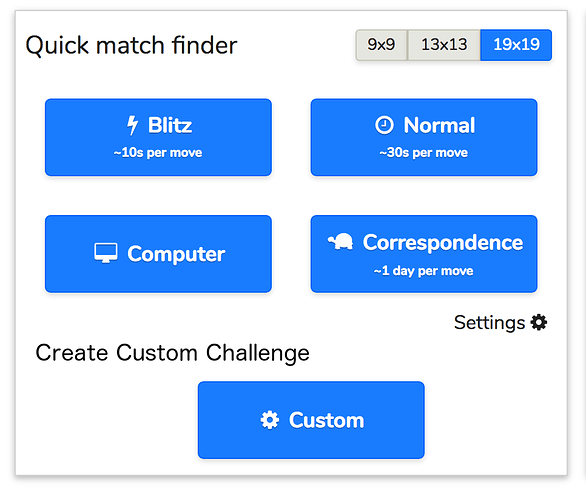 Basically, the gist of it is that 4 of the buttons all do the same thing: they find a quick match - the result is “looking for a game”. The game that they are looking for is controlled by the Settings.

Separate from that, you can Create A Challenge, using that button.

Assuming the logic is right, the other advantage is that this gets rid of the oddly shapped Correspondance button.

Yes, this should definitely be changed to this.

The only extra change I would propose is no extra “Create Custom Challenge” text and instead maybe leave the “Custom” button separate from/ below the frame (grey border) of the “Quick Match Finder” buttons to make a visual separation/ grouping.

Also in general I would say the three time settings buttons should be grouped separately from the “Computer” one. So add the “Correspondence” to the row with “Blitz” and “Normal” and leave the “Computer” button in a row by its own?

If I were to tweak it, I would leave the "Create Custom Challenge"and “Quick Match” field titles, because it is helpful to have words describing the overall action that those fields cover. I would change the text to be “Custom Challenge” and the button to be “Create”.

I think that the tidiness of the 4 buttons in the “Quick Match” square with the time setttings for quick matches outweighs the small difference that happens when you press the Computer button.

Sure, conceptually you could say that the Computer button is more of a “Custom Challenge” in that you get to select all the settings for the Computer, but overalll it belongs up there because in all cases you expect the game to be started by OGS, not by someone clicking “Accept”.

The main thing to fix is having some easy to grasp functional grouping matching the visual grouping.

I didn’t refine the mockup because to do that you need to be able to match the button text font, which would be some messing around to achieve

FWIW, if you want to vote for this, I posted it here:

I posted a suggested layout here: https://forums.online-go.com/t/clearer-layout-of-game-finder-pane/12354 Basically, the gist of it is to group 4 buttons that all do the same thing: they find a quick match - the result is "looking for a game"....

FWIW, I submitted a PR implementing this change: https://github.com/online-go/online-go.com/pull/471. 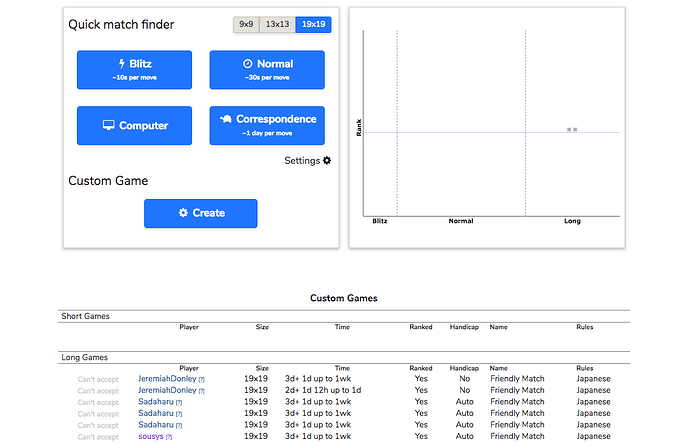 (That is a screenshot, not a mockup)

It improves the site without further complicating it. Quite the opposite.

Given that it’s a PR my guess is this will soon be implemented. The devs love having us put our money where our mouths are

The Game Finder function has found me a lot of really great games. It’s batting 1,000 so far.