Collective development of a server for variants

I’ve just thought of something else to consider: Sometimes during the game the move sequence may change, like when a player gets eliminated in battle royale.

An advantage is that you can create various kinds of patterns. A disadvantage is that from this structure alone, it is not clear how to display the board (we solved this by storing a bunch of data inside each intersection, like a coordinate vector etc.)

I’d want that, yes.
And the question what we want is an important one in general. I think it would be good to at least consider stuff that someone wants, even if others are not interested, to build something that is flexible.

I’ve come up with a new board to play Go on. It’s inspired both by Toroidal Go, which is like playing Go on the surface of a Torus, and M. C. Escher’s Prentententoonstelling: [image] or rather, this Droste version of it, made by a group of Dutch mathematicians in 2003: [M.C. Escher's Print Gallery unravelled, 'completed', and zoomed in] Toroidal Go Let’s start with how Toroidal Go works, which you’re probably already familiar with. To make a Torus, we take a rectangle, and then…

A disadvantage is that from this structure alone, it is not clear how to display the board

There are pretty mature graph drawing libraries out there…

Here’s a 9x9 board as drawn by GraphViz, not exactly a go board, but playable 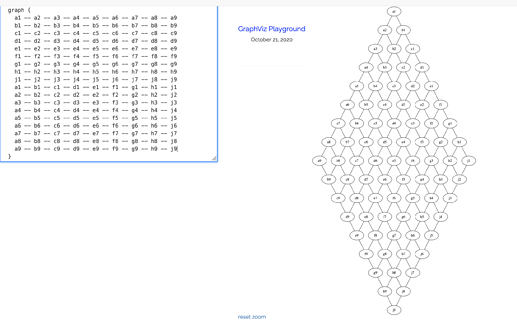 I’m not saying we should visualize stuff this way, just that we have something to fall back on if the board state is represented as a graph.

Yeah I suspect that non-planar graphs will be tricky to visualise.

For planar graphs it’s not a big problem, I think. For example we can compute coordinates for intersections (different from the usual goban coordinates) for the purpose of positioning them nicely.

How about supporting multiple classes of stones (i.e., different types of stones with varying capabilities)? Or radically different winning objectives, like the capture of a special type of stone?

Recently I came across this website dedicated to a weird go variant. Despite some very complicated rules, this variant seems to have attracted a small but passionate following - they even have their own tournaments! Because of the sheer number of rules, it can be very hard to get started playing, and I must say the tutorial doesn’t really do a good job of explaining all the changes, instead jumping straight into some cryptic puzzles. So let me try to give a short introduction here, to increase…

Okay I think the big question for me is how do we start?

are we doing “green field” or extending an existing project?

I don’t know yet. Maybe we should take a look at Variant Go Server and sketch out how certain features could be implemented? And maybe how we’d implement them if we were doing it from scratch?

If you’re doing things on graphs, potentially supporting hex boards, there’s other go variants or Go inspired games one could think of also like

If I understand it correctly, Keil is an example for a variant that cannot (feasibly) be played on any grid. If you were to apply Keil’s definition of connectivity and liberties to a rectangular board, then any stone would immediately be captured due to having no liberty … then all moves are illegal. Just goes to show that combining variants can be tricky.

Regardless these are certainly some good ideas!

Okay I think the big question for me is how do we start?
Like are we doing “green field” or extending an existing project?

I don’t know yet. Maybe we should take a look at Variant Go Server and sketch out how certain features could be implemented? And maybe how we’d implement them if we were doing it from scratch?

I have a suggestion: We discuss which basic elements we need and then we decide whether it is easier to change an existing project or start something from scratch.
Currently we know that:

Currently I’m tending towards building something new, because of Variant Go Server’s biases towards chinese scoring, alternating moves, intersections with x-y-coordinates, but we could probably use a lot of the existing code, so I still think changing Variant Go Server might be a viable option too.

To expand on these points:

That’s a difficult UX topic even without variants!

One question: has anyone managed to get the server running? I tried and failed, but that’s says more about my (lack of) docker experience than anything else…

One way to bypass the UX problem that is the scoring phase is to use area scoring with the exception that dead stones have to be captured (i.e. Tromp Taylor Scoring)

AFAIK that is how dipgo does it (or at least used to do it), and maybe VGS too …? I’m not entirely sure.

I’ve been thinking how to model a game in an abstract (mathematical) way that doesn’t restrict ourselves too much, but still helps by providing some structure. (Just to be sure, I’m not proposing we use these as part of our data structure.) Here’s the ideas I came up with:

At all times a game has a game-state. (contains all informations needed for rule considerations, might e.g. include information that defines …

A game has rounds. (discrete time units where players make decisions. I find this a sensible assumption unless we want to include “real-time” variants.)

During each round, all players have options. (can depend on the game-state, and a player can have zero options)

A game has a transition function, which takes the game-state and all options chosen by players this round as input, and replaces the current game-state by a new one whenever we proceed to the next round.

The game ends when reaching a game-state where all players have zero options.

I believe these assumptions facilitate all variants that we listed so far. (although I’m not 100% confident

) There are still unanswered questions such as

Not sure if any of this helps though, sorry if I’m being too abstract here.

Go and Go variants have a scoring phase where players need to agree on dead stones (even it they arent fully surrounded).

True, that’s something to consider too.

has anyone managed to get the server running?

sorry if I’m being too abstract here.

I think it’s good to think about it like that. And that’s a perspective I haven’t discovered in the code of VGS, it seems that its code evolved variant by variant (“if this variant, do this” pops up a lot in the code) and it’s lacking some sort of abstraction layer.