I’ve come up with a new board to play Go on. It’s inspired both by Toroidal Go, which is like playing Go on the surface of a Torus, and M. C. Escher’s Prentententoonstelling: 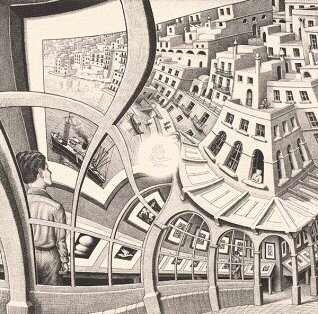 or rather, this Droste version of it, made by a group of Dutch mathematicians in 2003: 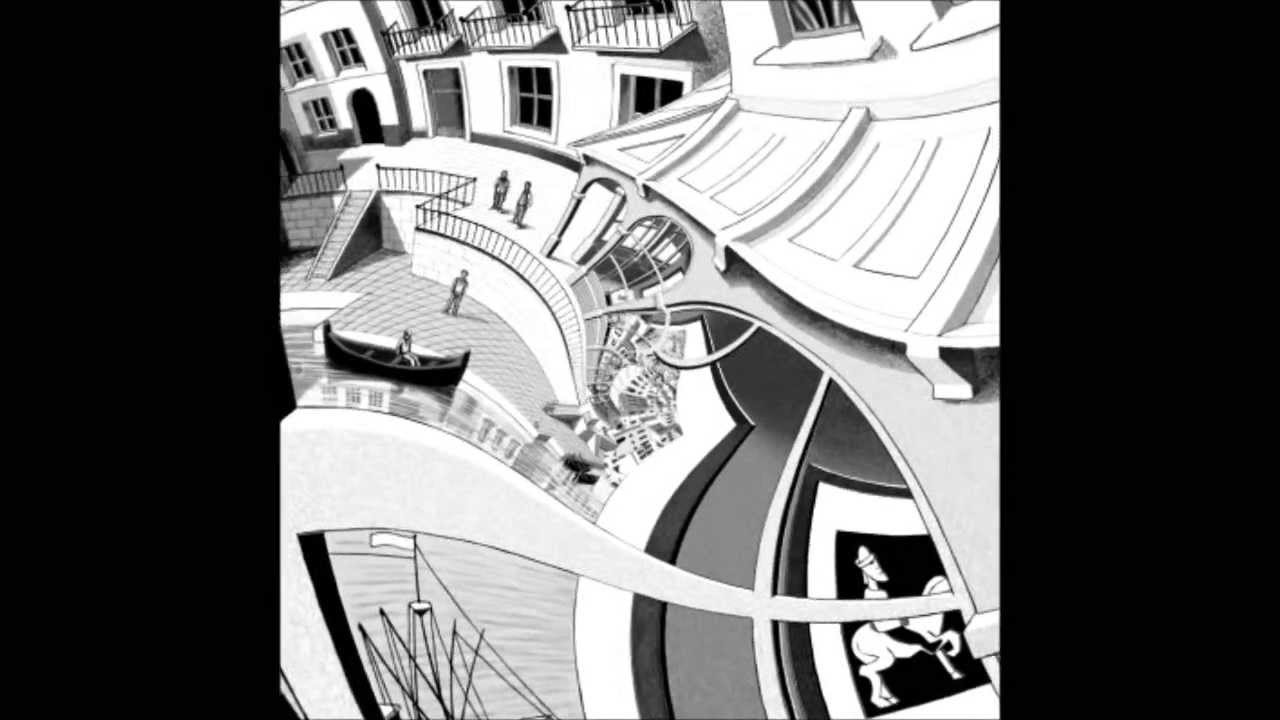 Let’s start with how Toroidal Go works, which you’re probably already familiar with. To make a Torus, we take a rectangle, and then glue the top and the bottom to each other, and the left and the right sides, in the following way: 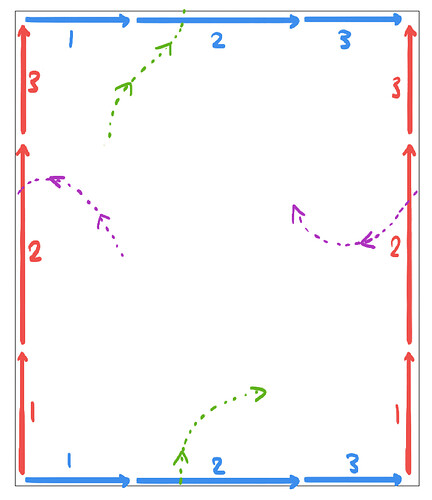 If you make your rectangle out of highly elastic rubber, so that you can stretch it, then by glueing together the blue arrows you get a cylindrical tube, and by glueing the red arrows afterwards, you’d get a donut shape: 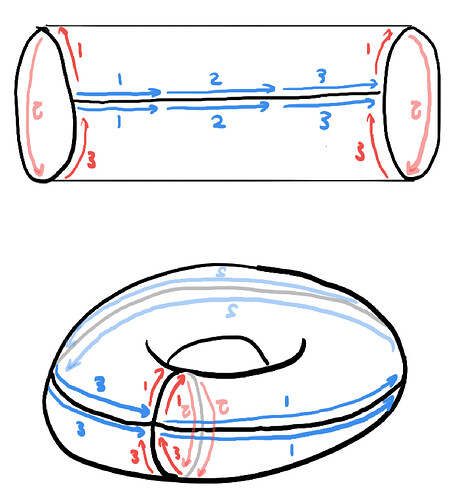 Getting the surface of the Escherian Goban

Now, let’s take a rectangle, and stretch it a bit, to get this funky rectangle:

It’s a nice shape, since we can put four copies of them together to get a large square with a small square in the middle: 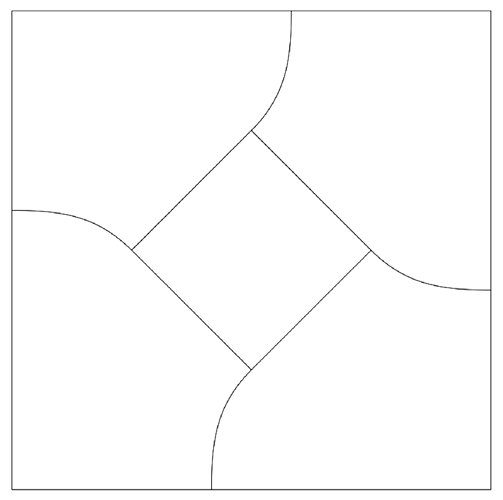 And that’s where we will start glueing. We glue the large square inside the smaller square. Since real-world objects are usually not stretchy enough for this to work, you might not only have to bend your imaginary rubber sheet, but also your imagination a bit. 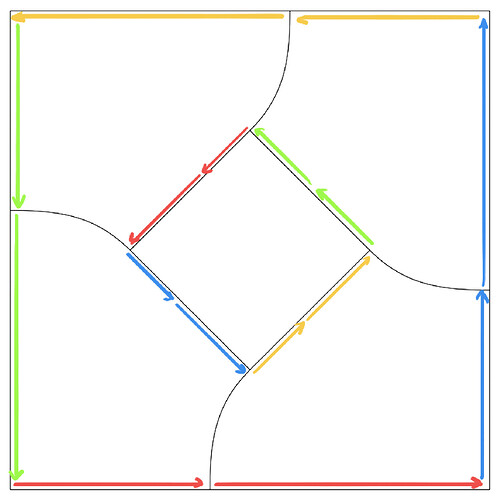 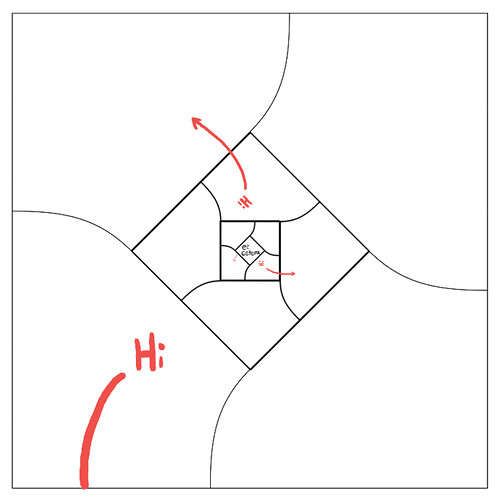 Now, imagine that we draw a couple of lines in our funky rectangle, then we make a funky grid on which we could play Go! 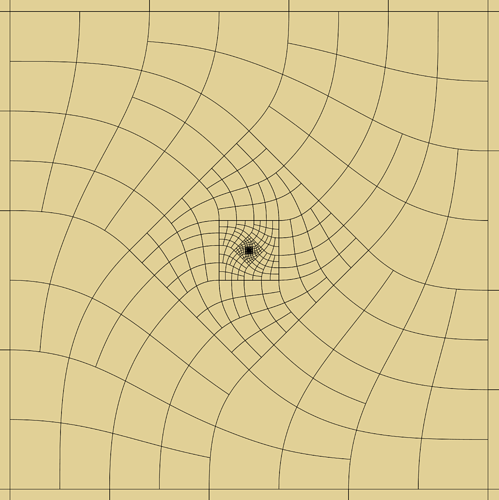 The grid I drew contains 24 intersections per funky rectangle, giving a total of 96 intersections, hence a game on this board should be about as crowded as a regular 9x9 board. To make a bit more comparisons:

Of course the interesting part is that there is not really a well-defined edge: I’ve made sure that no intersections with 3 liberties are placed next to each other. I therefore expect it to be harder to live, like in Toroidal Go, because most of the board functions more like the centre than like the edge.

A coordinate system is a bit tricky, since it’s not a regular grid, but I thought it might be easiest to give each of the four funky rectangles a letter, and then simply number the intersections. I’ve also coloured the areas, to make it easy to recognise which parts are copies of each other: 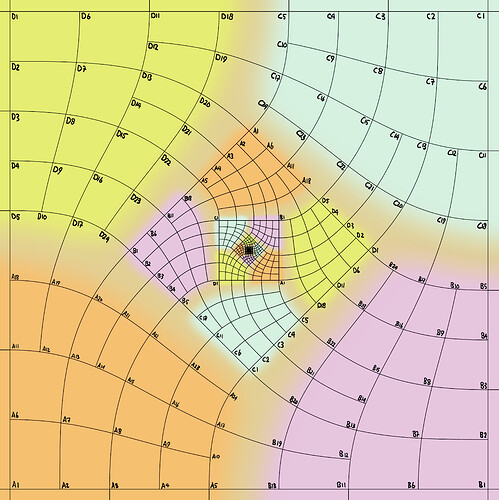 As an example of how it would look with some stones on the board, here is the first 9 moves of a hypothetical game: 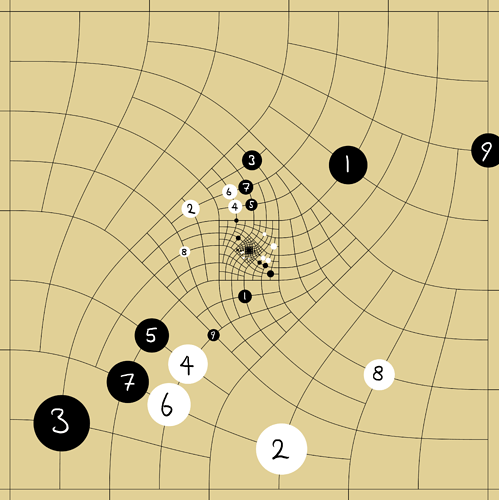 I’m dying to try it out, anybody who wants to play a game against me, here on the forum?

[Update]
The first game has started, against yebellz.

I’ve also created an interactive site that makes it a bit easier to actually play this. Quick and dirty for now.

Also, these can become as complicated as you’d like, this one has 396 intersections, being comparable to 19x19, and having a few more edges: 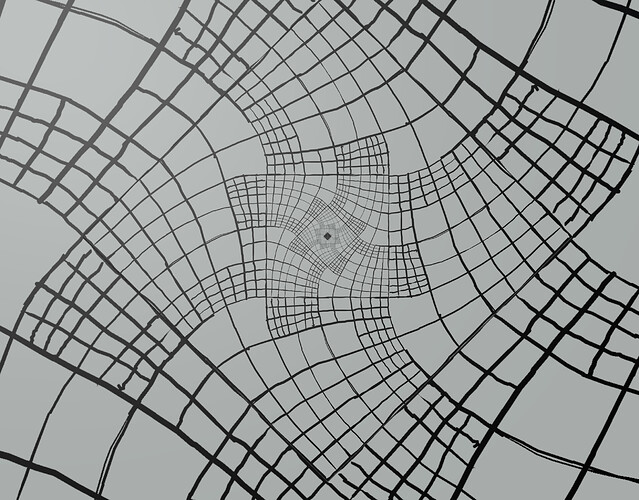 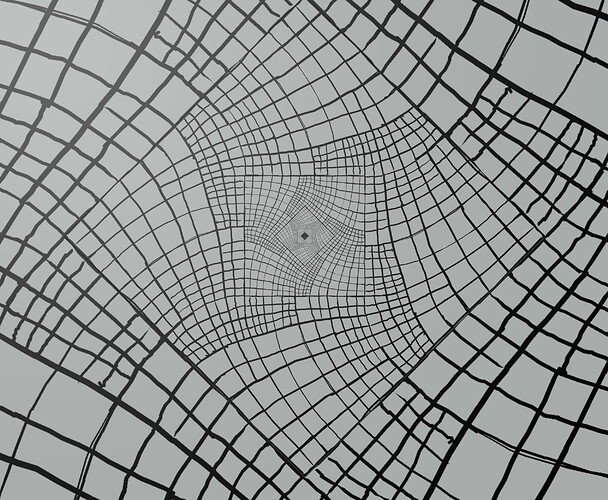 (I’m drawing these using the texture painter in Blender, by the way)

anybody who wants to play a game against me, here on the forum?

I’ll respond with A20 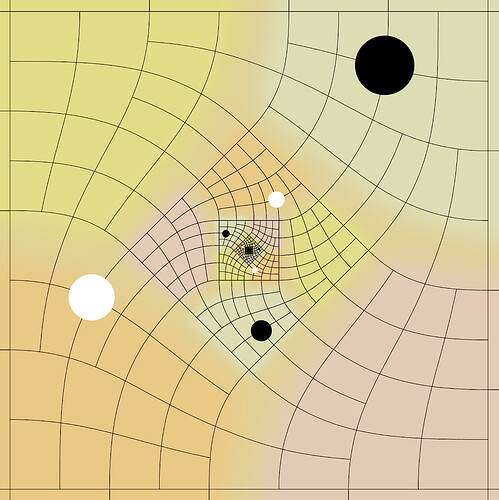 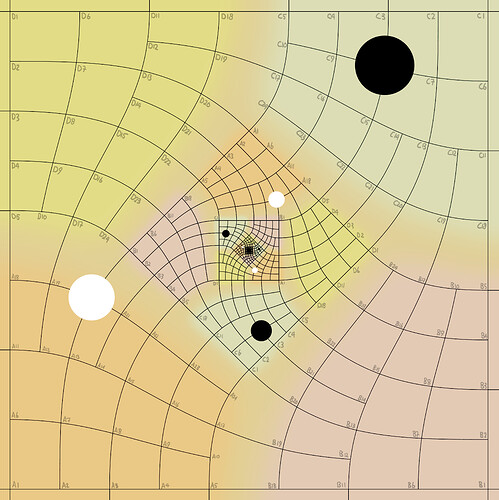 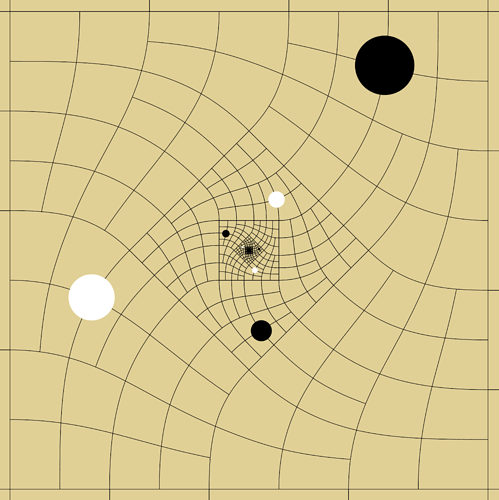 I like the second visualization (with both colors and coordinates). I need all the help that I can get.

We could have Democratic Diplomatic Escherian Go

This is harder than I thought already! I’ll be (dis)playing my move D22 after finishing the interactive version, probably makes for the best experience.

To ease the burden of doing it by hand, probably just one layer of nesting is enough.

However, if you are already going to go to the trouble of implementing it in code, might as well make it infinitely zoomable (both in and out) via the mouse wheel…

Of course, I kid, but know that a true pedant wouldn’t back down from the challenge

looks sceptically, thinks “should I be worried?” 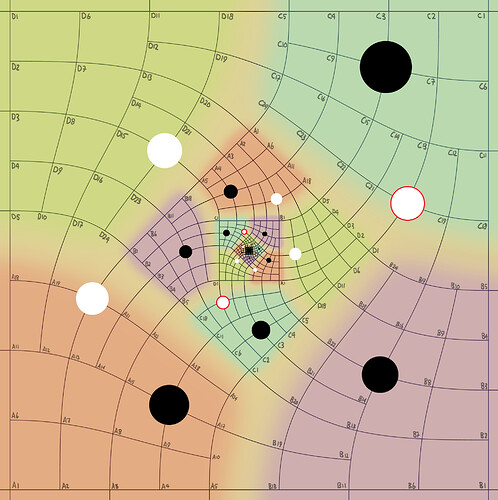 Short Digression on why this is still Toroidal Go

That looks great, however all of the stones I place are black. How do I change color on mobile?

that there is no infinite zooming.

I recommend PC over mobile, by the way, since coordinates that you hover your mouse over are marked in red (in all copies), which makes it a lot easier to track the stones.

Save and load by URL would also be nice

Or maybe few lines inside and outside an annulus of fancy squares (which actually is very similar to how a torus would work). 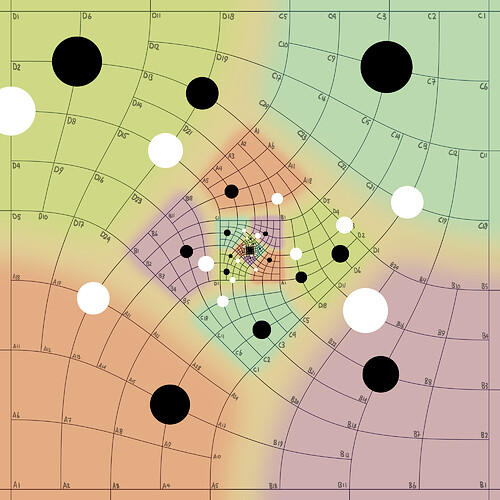 I’ve added saving and the stones now alternate between black and white.

What is it? First I see it I think I drink too big. It’s too magical. Thank you.

It’s not really a fractal if you consider that the several differently-sized boards are identical to each other. I would interpret Fractal Go to be Go on an infinite board, where each intersection is separate from each other. With infinitely many territory, it will become hard to find good rules to determine the winner, though. 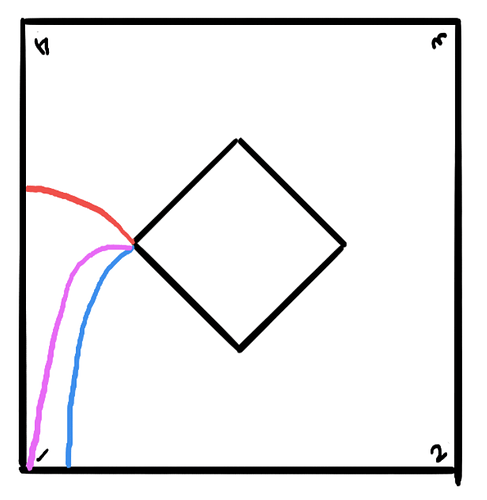 When we straighten the purple line and curve the straight edges of the squares, we’d get the following four arches:

If we take the actual board, and cut out one of these arches: 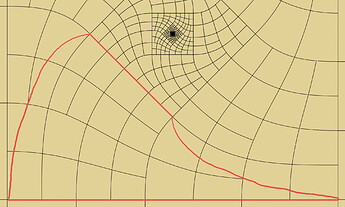 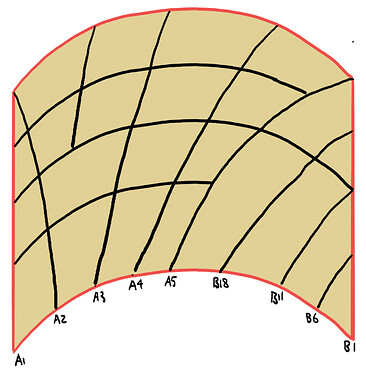 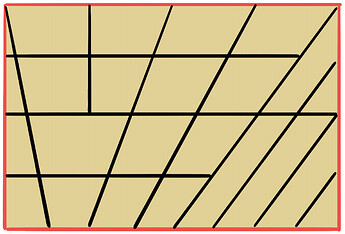 And put four of them next to each other and repeat on all sides, and you have the toroidal grid that we’re playing on: 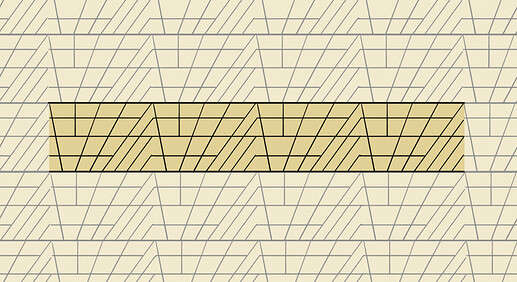 I must admit that it’s a lot wider than I thought, preliminarily.

Oh yeah, I forgot about the offset, the corner directly above A1 in this straight diagram is of course B1, so actually it should look like this:

With the rectangular board being: