Almost like this.
Tsuke go limits itself to the four(horizontal and vertical) solid connections.
What I meant was that the moves must be played on both the horizontal / vertical intersections or the four diagonal loose intersections.

So if Black starts on C3 White can answer on one of the 8 adjoining intersections (bottom left), whereas in the video only 4 intersections are allowed (top right). 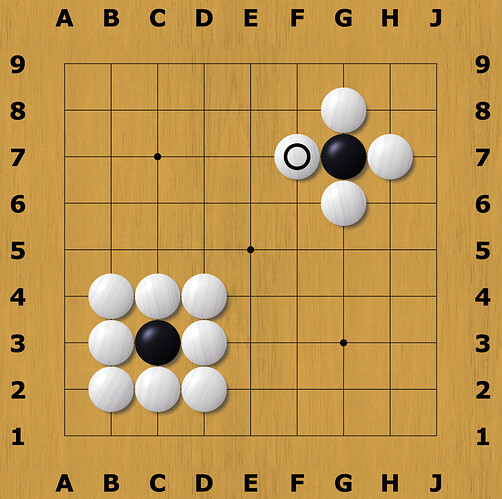 It seems that only

is displayed well across a lot of devices, since that one is treated like an emoji.

I’ll admit I’m not the biggest fan of the Werewolf game series.

How did y’all let KAOS get away with this???

But I did post it. -> When the pandemic is over, I will

When the pandemic is over, I will

And it wasn’t silly, I expected something silly.

Note that this doesn’t include the poetry threads and games.

In that the game is formally finite.

The werewolf games only continue until either the werewolves or innocents win, the hurt / heal games continue until there is a winning fuseki or joseki, and the all-in-one democratic game finishes when the game of communal Go is over.

Games like the guess rank game or community geoguesser don’t have that formal bounding; they continue until the players get bored.

I think that’s a reasonable definition for practical unboundedness.

Of course, everything is bounded by the eventual heat death of the universe.

Is heat death the scientific meta? I thought it was cool death right now.

I really don’t know what’s the most popular theory at the moment.

Ah, I thought you meant heat death as in a hot death, by everything collapsing together.

I remember now that you have the term correct.

nobody mentioned voidship down which ran for a while.
its been over for a bit now, but it was fun
(Voidship down, essence low for refrence)