In my effort of creating Go variants that start with the letter E (1, 2), I present Enthralled Go! It’s quick and silly, and I don’t have time to play it right now, but here it is anyways.

Both players start by playing two moves each, like normal. In secret, each player chooses one of their starting stones to be susceptible to charming. A group that contains a susceptible stone will switch colour as soon as it touches a group of the opponent that contains at least two stones more.

For example, if the marked stone is susceptible: 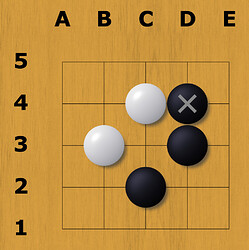 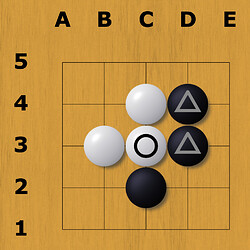 then the marked group has two stones, and touches an opponent group with three stones, thus it does not become enthralled.
Now, let’s say black plays B2: 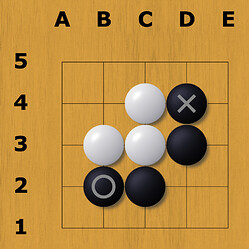 When white plays A3, the white group has 4 stones, and the susceptible group only 2, thus it becomes enthralled (which wins white the game, I presume): 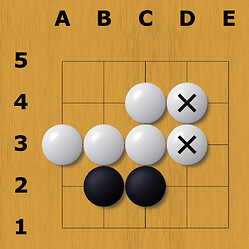 Since it’s not known to your opponent which of the first stones is the susceptible one, there’s some psychology involved as well, where it makes sense to bluff that one group is susceptible, while it turns out it isn’t.

Since the opponent needs at least two more stones to enthral a group, it’s not impossible to keep up with your opponent in number of stones, up to a certain point.

Playing in a corner with a susceptible group can be very risky as well, since it’s hard to add stones to a group that’s enclosed in a corner. Therefore I’d expect some interesting opening moves as well.

Are you perhaps trying to create go variants for all the letters in the alphabet?

Would be very interesting to see other letter go variants.
Fatalistic go, underground go, multi dimension go, reverse go; just to mention a few.
Okay, I am trying to bait you just a little bit

The letter E it is.
How about emphatic go (trying to help your opponent), eleven go (every eleventh move is a random generated move by a randomly chosen colour), etc?

Sounds interesting, @Vsotvep do you want to play?

Next week perhaps, I’m behind on every schedule I have

I have tried several times to find a good way to get retrograde chess problems translated to go context, but apart from some ‘plausible’ moves it’s quite hard to make anything.

How about emphatic go (trying to help your opponent), eleven go (every eleventh move is a random generated move by a randomly chosen colour), etc?

Don’t worry, there’s more on the way. I have some vague ideas for other variants. Also:

I have tried several times to find a good way to get retrograde chess problems translated to go context, but apart from some ‘plausible’ moves it’s quite hard to make anything.

I’m guessing you’ve seen this one before then, but I’ll take this opportunity to share it anyways 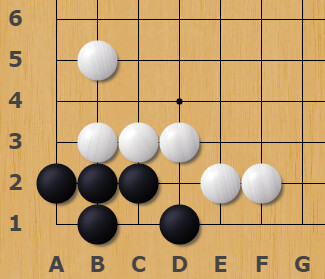 Black to undo their last move (one of the black stones visible in the diagram), then find a different move that lives.

Hah, I had to check that every stone was impossible three times before I got it. It helped to have read a bit of “The Chess Mysteries of Sherlock Holmes”, though I guess Go doesn’t have very many silly tricks like blocked bishops or the board being turned 90 degrees.

Is this a trick where black’s previous move was outside of the cropped area?

Nope, it even says so in the description:

(one of the black stones visible in the diagram)

And it does have a solution, indeed.

Am I misinterpreting the puzzle?

Is it the following setup?

Basically, is black making an undo request before or after white has played a response?

If it’s ver2 then it’s an easy one (too easy, and no need for the hints so I doubt) unless w response has to be logical.
Let say you undo B2 and that white answered B2 with B3 so you put away B3 too, now black lives easy.by playing B3 itself.
But this is still illogical as white didn’t need to answer B3 to B2.

It’s not version 2. Black has just played and will do a normal undo of one black move, like clicking the OGS undo button.

(Assuming I understood it correctly!)

Doc OGS:
If you’ve made a mistake, you can request an Undo to your last move. To do this, click the Undo button above the chat area (Note, this button will only be visible when it’s not your turn)
So white cannot have answered yet.

Black is making an undo request before white has responded. White accepts. Then black plays a different move, which makes it impossible for white to kill.

Seems to me, that for whatever go variant you can think of, you create a name starting with an E.

Big hint + hint was efficient. Got it.