Hi there, I’m back with another Go variant that I would like to try.

It’s a variant for 3 or more players (though it gets increasingly harder with more players). The idea is very simple:

Three players playing each other (5x5 for exemplary convenience): 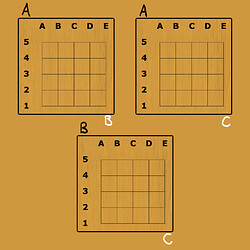 Player A moves first, at D4, and places a black stone in both games at D4. 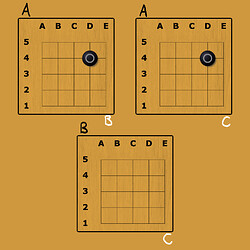 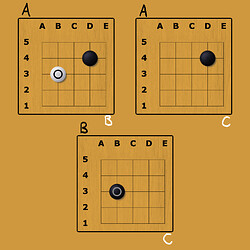 Player C moves third, at C2, and places a white stone in both games at C2. 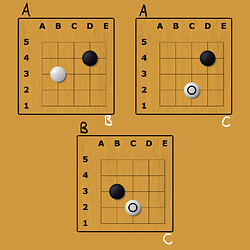 Player A has another turn, at B4, and places a black stone in both games at B4. 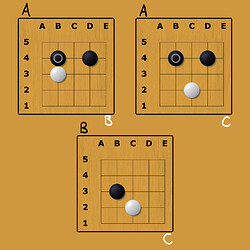 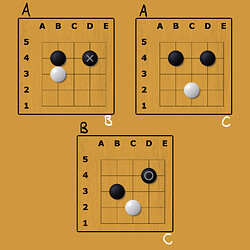 Next C takes their turn, and so on. 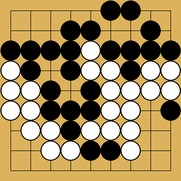 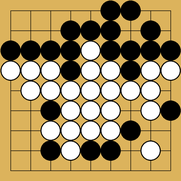 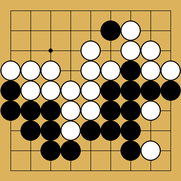 Since the individual games are perfectly normal games of Go, we can easily play a trial game on the site.

Hence, I’m in search of two or three people who would like to try this

What a terrible idea!

Of course I’m in.

I think it might make things somewhat less confusing if every player gets their own color, so we have for instance black-white-red in that order, and a b-w game, a b-r game and a w-r game.

That’s also fine, since it has no impact on the game itself, but of course it’s hard to do it practically. Also, knowing which colour gets the komi would become slightly confusing.

I’m fine with being the second player, such that the other two players can keep their own colour

Actually, komi doesn’t matter, since we add up the scores: the first player gets no komi, the second 7 + 1/n, the third 14 + 2/n, and so on, where n is the number of players (since that half point should never stack up to become a full point!)

I think it should be pretty easy to do practically, even using your existing multicolor tool: 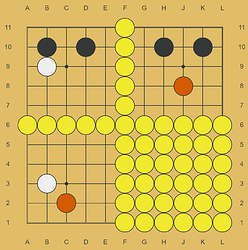 Of course a dedicated tool could be even better, I might make one tomorrow if you haven’t already by then

Yes, I was considering that as well, but it’s not very convenient to have to post on the forum for each move.

Also, a 5x5 board is maybe a bit too small for a proper game of Go.

I can join in if it’s 9x9 correspondence. I don’t think I’d dare try faster or bigger!

I’m fine with that, although I’d secretly love to immediately jump into at least 13x13 if not 19x19, since I think it will work better with this idea. In 9x9 most likely you will always have to play a bad move in one of the games, a good move in the other, while in 19x19 there is a lot more space, and bad moves don’t immediately kill you.

But if nobody is up for that, I can understand

I think starting small is good

Just like 19x19 regular go is a better game than 9x9, but for a beginner the smaller board is much better.

Ok, what order shall we play in?

I’m quite irregular, but probably could reliably play a move late in the European evening

~10am CET daily is when I’m most reliably on.

If @le_4TC is usually earlier than I am, I guess I should play after him, before Kosh.

Shall we say Kosh starts, le_4TC as the second player, I play last?

You’ll have to send each other a similar challenge, with Kosh as Black, le_4TC as white.

Here are the three games:

This sounds very interesting. However, I do have some questions…

With 3 or more players, is private communication and negotiation allowed?

Let’s keep all conversations public.
But yes, this is an interesting way to expand the rules towards.

Getting the best score, of course, i.e. winning as many boards with as much as you can.