Playing on the union of two boards

Would someone like to try a game on two boards at once? 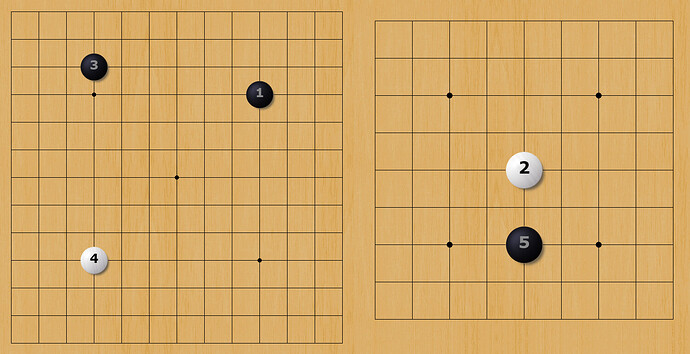 This is a very natural variant to try (actually not really a variant at all, just regular go on a different type of board). It’s important that the two boards are of different sizes, otherwise the second player could always mirror the moves on the opposite board (there are of course other ways to counteract this too; starting from a nonsymmetrical position, letting the stronger player take white and reverse komi, etc. But I find the non-equal board sizes more interesting anyways).

It’s very convenient to play IRL, online is slightly trickier. It could be played on OGS in two separate games by always passing in one of the games, but as we recently found out while playing Entangled Go it get’s slightly annoying that the game automatically enters the scoring phase every time two consecutive passes happens. VGS has the same basic issue, but at least you won’t get a notification every time a scoring phase is cancelled. Setting up two boards on https://goban.co/ could potentially work very well (in theory it should allow both players to freely edit both boards, but I don’t have much experience with that page). In a similar vein, http://www.iggamecenter.com/ has a sandbox mode which should work nicely, but would require manual removal of stones.

I’d like to try, but this is so much like normal Go, that I’m not sure if I would be a challenging opponent…

That’s no issue, we can play with some reverse komi or handicap

What’s your preferred place to play? I think http://www.iggamecenter.com/ would be nice to try (it could potentially be a good option for future variants, so I’d like to know how it works), if you don’t mind creating an account there.

It looks like these are live games, right? Because I don’t have time this evening, but if correspondence is available, sure, or otherwise we can try tomorrow or so

It might be possible to play essentially correspondence by setting no time limit, not sure exactly how it works. But playing live would be cool in any case! I’m available most times so I’m sure we can find a time that works in the next few days.

I think the best place to play this variant at the moment is VGS, by using blue stones to divide a large board into smaller ones. Here’s a game we just played with 9 7x7 boards:
https://go.kahv.io/#3327
The gameplay itself is very good I would say, and I would love to play it more with different combinations of boards.

One side effect of setting the board up this way is that you can’t score points in areas adjacent to blue stones unless you fill them in. So some groups get a group tax and some don’t, and there may be some strategy in forcing the opponent to make eyes along the side where they won’t count for points. This isn’t really that fun, so for future games I would prefer to score normally in some manual way