There are many multi-player variants which take advantage of the fact that the go rules generalize easily to multiple colors. But when playing with more than 2 players, there are lots of new complications (how to define objectives? how much diplomacy to allow?). Here’s a variant which combines the fun of multiple colors with the simplicity of 2 players:

Before starting, place some number of neutral stones on the board. Then play normally with black and white. No more neutral stones are placed throughout the game, but the stones already on the board behave just like they would in a 3-player game (for instance, they are removed from the board once they run out of liberties).

Unlike the last variant I proposed (Playing on the union of two boards), this is super convenient to play on VGS. One of the players takes the seat of the blue player to place some predetermined stones (while black and white pass). Once all the blue stones are placed, blue resigns the game. Then black and white can continue playing normally, without having to worry about passing for blue. 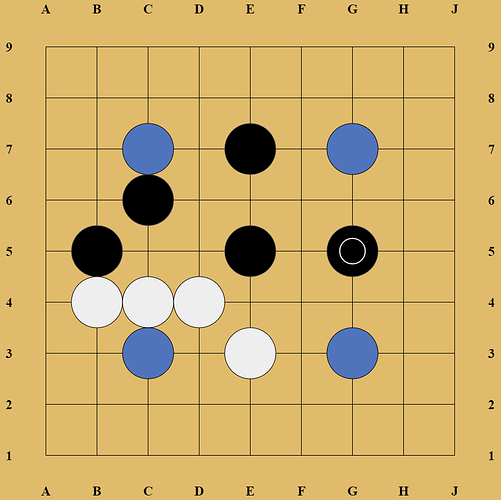 Here’s an example game I played against myself: https://go.kahv.io/#2488 (not the highest quality moves, just a proof of concept).

There are many fun starting positions to try out. I think a nice one to start with would be 5 blue stones on the star points of a 13x13 board. This will make corner joseki quite interesting!

If you’d like to try it out with me, just take the black seat in this game: https://go.kahv.io/#2505 (or feel free to propose your own starting position, with handicap if you prefer).

(Edit: That seat is now taken, just let me know if you’d like to play as well, and we’ll start a new board!)

This sort of endgame shape (at D10 and G7) seems to be a common occurence: 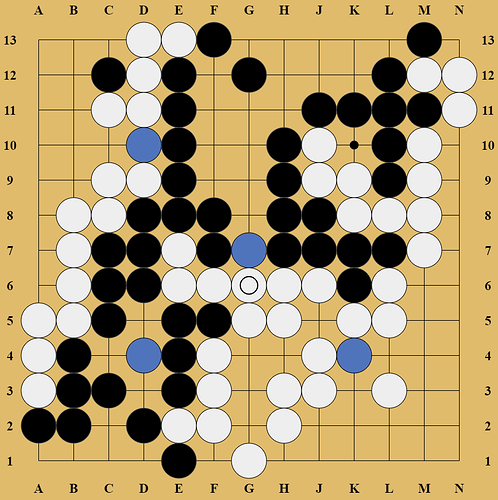 Note that it would be a mistake for black to play C10. Instead black should wait for white to play C10, and then play D10.

(although black C10 could possibly be useful as a point-losing ko threat sometimes. If white did not have a stone at B8, C10 would be big threat, and could potentially help winning a big ko, making the point-loss worth it) 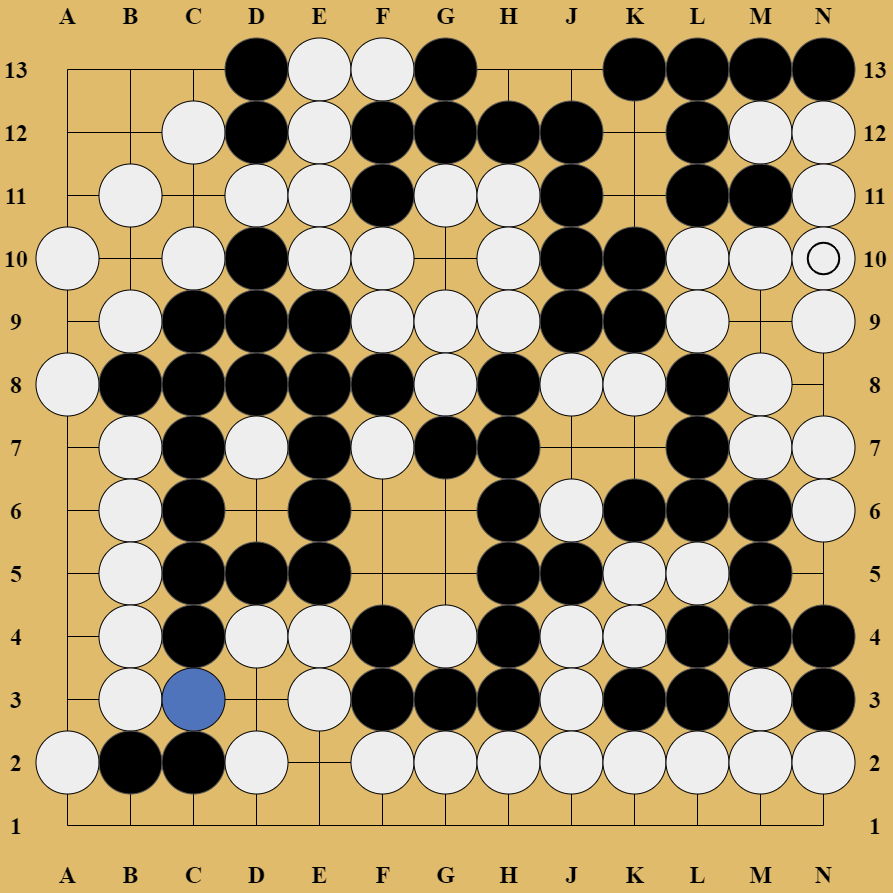 The black stones at B2 and C2 are dead, despite the fact that the blue stone at C3 will eventually be black if white plays on! There are two equivalent ways to end the game (after the exchange N5 J7 of course):

Option 1: Agree that the black stones are dead, C3 is alive, and D3 is dame.
Option 2: Alternatively, white may want to capture the blue stone, to claim D3 as a point. Then white must start with B1 and C1, and then C2 and D3 to capture. This allows black to get C3.

Option 2 gives one point extra for white and for black. Thus it doesn’t matter in a two player game, but if blue were actually a player, black and white would usually prefer getting a point extra each, while taking a point from blue. Anyways the choice is in white’s hands, black can not force option 2. 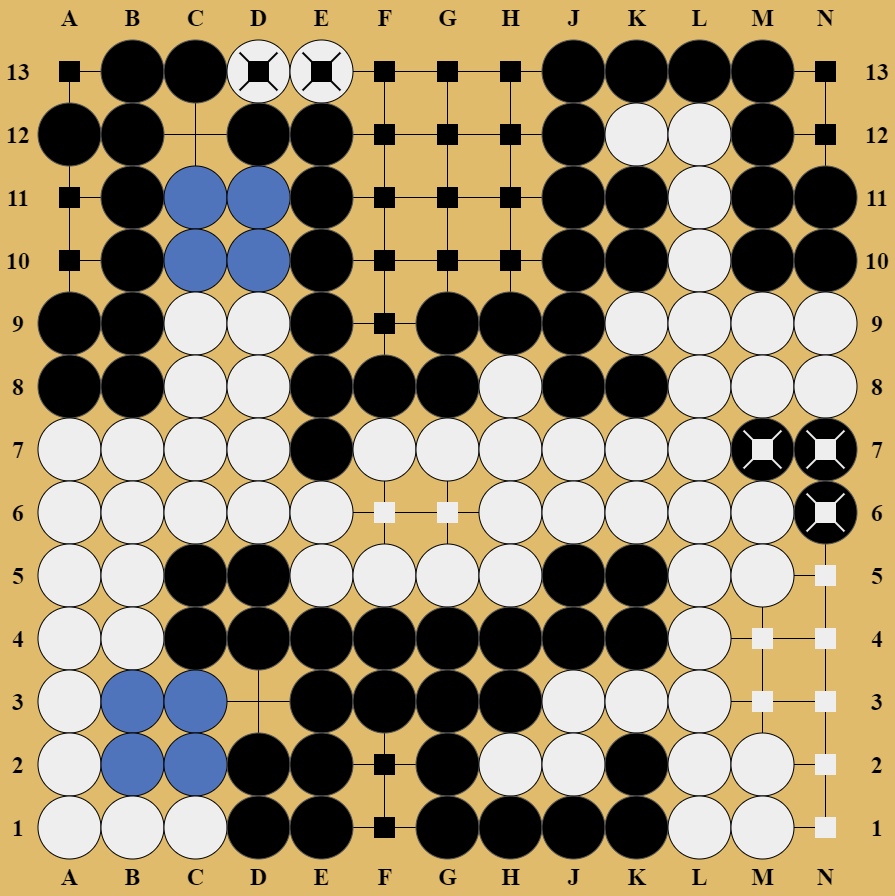 This was the final position in the pixel go game. Two interesting things: 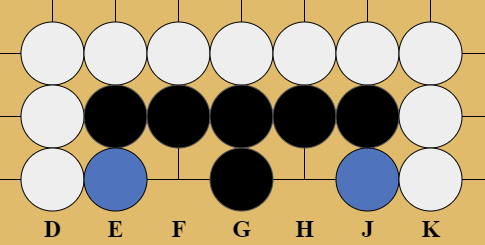 I really like being able to look at a position like this and saying with certainty that it is a seki. If it were a 3-player game, things would be much more messy. Maybe white wants to reduce blue’s score, and doesn’t care about black’s score? Then white should capture the blue stones. Maybe white plays directly after blue, and blue wants to reduce black’s score? Then blue could suicide to let white kill black.

So 2-player games are nice and simple in comparison. It’s a seki. There are two point-losing ko threats for white. That is all there is to say about the position.

There are so many new interesting situations possible in this variant! Check out this tsumego: 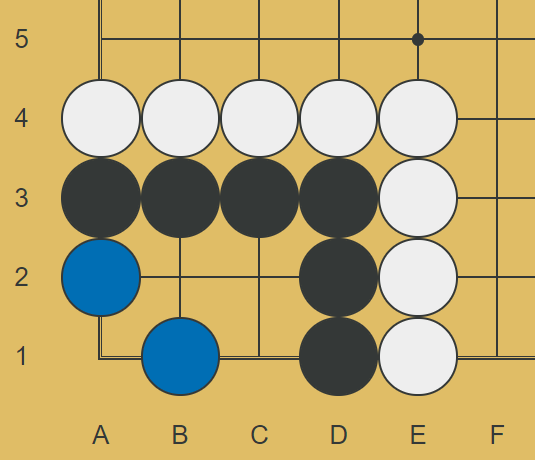 What is the status of this black group?