A year ago I made some posts about 2-player 3-color go. Recently I had another multicolor idea that is so simple that it almost certainly has been played before:

Each player controls two colors in a game of 4-color go.
Your score is the sum of the scores of your two colors.

Actually I remember thinking about this several years ago, but I was hung up on a physical game where you can choose which color to use for each move, which doesn’t really work well (no incentive to use more than one color), so I scrapped the idea. Turns out all we need to fix this is to enforce a turn order:

One could also try this “double move” variation:

Having to work with two colors has some interesting consequences: to a certain extent it’s possible for your stones to help each other, but if they’re in direct contact they will hurt each other by taking liberties. So you might try to segregate your colors, building each group out of a single color. However, when the opponent is playing forcing moves against your group (possibly using both their colors), your stones could be forced to work together to defend.

This variant could be played with Vsotvep’s multicolor tool in the same way we played several other variants on the forum. But even more conveniently, it can be played live on the Variant Go Server! You simply select “Four color go” in the settings, and then once the table is created it is possible for one player to take multiple “seats”.

Here is an example 5x5 game I played against myself. 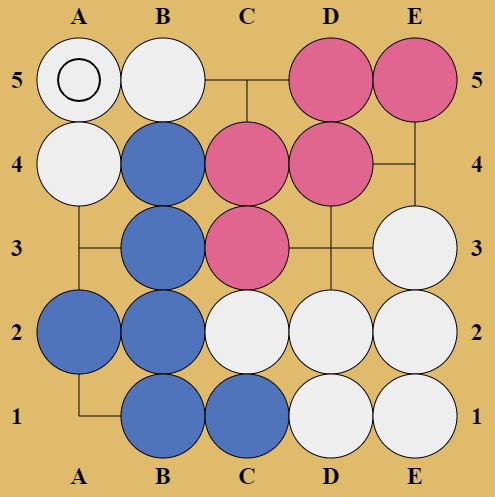 This was the final position, I think it’s not possible for red/white to kill, despite blue having only one eye!

I’m interested, but only have time on Wednesday (or thereafter).

I tried to think about what happens if white attacks, blue captures, red retakes, and then I can’t figure out how this resulting position resolves: 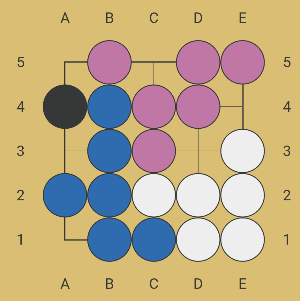 If player 2 can play red C5 and red A5 undisturbed, then she can next capture at A3. If she makes sure to capture with a red stone, player 1 can’t immediately capture back with a black stone because of the ko rule. So black passes, and then white A4 kills.

How about if red C5 is met by black A5? Then again player 2 can wait until she can capture at A3 with a white stone. Recapturing with a black stone will still be forbidden, this time because of superko (repeating the position after red C5).

So maybe it is possible to kill like this? I may very well have missed something.

Edit: wait, when I said “white A4 kills”, that doesn’t seem right… What’s the follow up when player 1 plays nothing? Ko again plays in to it somehow but I can’t quite keep track of both the color order and earlier board positions in my head.

Edit 2: ok, played it out on the board now which makes it easier. Starting from @Feijoa’s diagram above, red plays C5, A5 and then finally captures on A3 to reach this position: 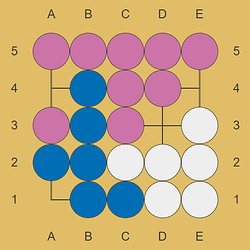 image534×533 21.7 KB
Now it is black’s turn. Black cannot recapture on A4 because of ko, so black passes. If white also passes, hoping to play a red stone on A4, then blue gets to play A4 and live. So white must play A4: 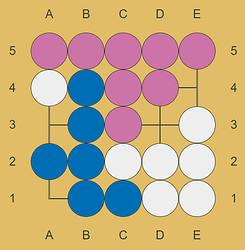 image527×536 21.9 KB
Now it is blue’s turn, but blue A3 obviously dies, so blue passes.
Now it is red’s turn, but red A3 would violate the ko rule.
Now it is black’s turn. Black could in fact pass and blue would already be alive (because white A3 is suicide. But better on points is to play black A3: 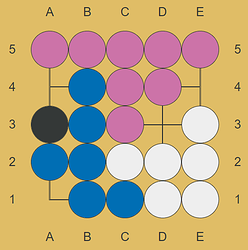 image524×527 21.9 KB
Crucially, it is now white’s turn, and white cannot capture on A4 because of ko. So finally blue plays A4 and we finish the game like this: 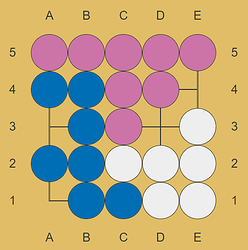 Starting from this position, neither player should play any more moves: 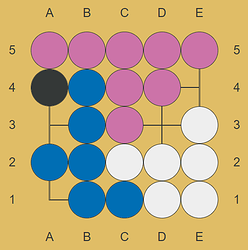 image526×529 21.8 KB
Player 2 shouldn’t go in for the kill, because that allows player 1 to make A3 into a point, whereas here it is neutral. (this is just how the VGS rules work, you could argue that territories next to only your own colors should count as points, but I actually think it adds some extra depth to the game that there can be “internal dame”)

And going back further, player 2 had an even better score here:

So, somewhat on accident, I think I may have ended the example game at the correct time.

About a year and a half ago I played this in real life, but we played with four players in teams of 2. We played on a 13x13 board. It was very interesting.

Your score is the sum of the scores of your two colors.

We didn’t play it exactly that way. During the game, when looking at connected groups and counting liberties, the 4 colours were distinct; but during scoring, the two colours in one team acted as if they were the same colour. This is notably different from just “adding the scores”. It means you can build a territory together with your partner. That gives a lot more incentive to cooperate, despite the liberty shortage.

I do agree that scoring feels a little more natural, but it’s just so convenient to use the scoring that’s built into VGS

(for larger territories, I expect you will often be able to close it off/fill it with stones at the end to turn it into real points. It’s mainly the eyes that need to be left empty, so it acts kind of like a partial group tax, and shouldn’t lead to a super drastic score difference hopefully)

How’s your availability today or tomorrow? My schedule is pretty free the next few days, just need to find a time when we’re both awake

I’m available any time the next couple of hours!

In about 30 minutes fine?

Sounds okay, but don’t expect me to be good at reading

There’s no chat on VGS, right? In any case, I’m ready to start. Have a good game

We can chat on discord if something comes up during the game!

Have a nice game!

I think the variant is really promising so far! You can get some local patterns that are very familiar when both sides are just using one color each (see upper left below for instance), but the 4-color fights have completely new tactics.

In the first game we reached this position, then I unfortunately lost on time: 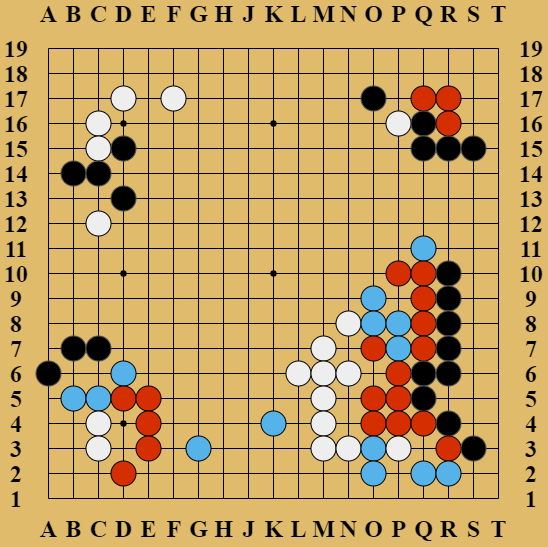 image548×547 36 KB
https://go.kahv.io/#4689
Vsotvep: black/blue
antonTobi: white/red
Both of us were unhappy with our positions, so probably an even game

Last move was black Q15, next up would have been white to play.

Then we played a very quick 9x9: 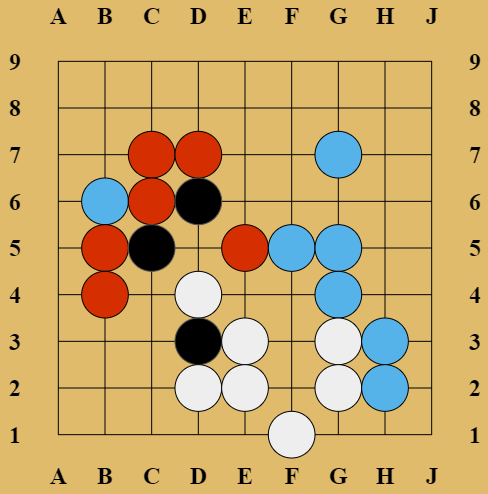 It seems like you are on the verge of inventing Blooms!