Completely new players, how do we analyze and score the game? How do you know when occupied territories on the edge of the board are to be kept alone (no player plays any more)? 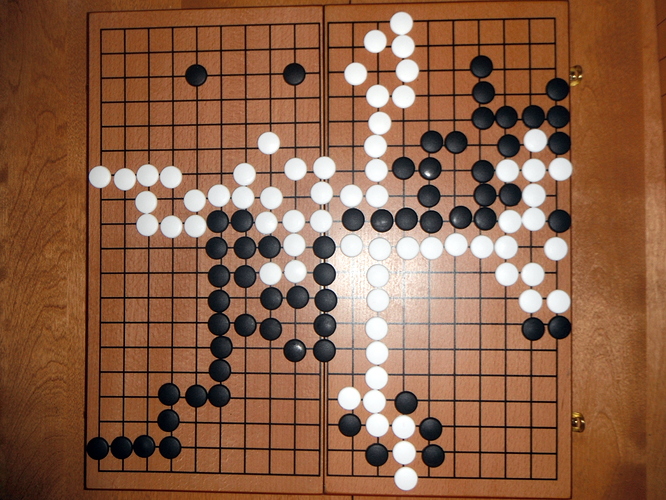 We have split the board in half I think. If I were black do I get the bigger half of the board, the smaller half, or both? What about the situation for white? How do you score a thing like this? Should the areas be left alone or played on? You know when there are areas that both players agree to not play in anymore, how does that exactly work? Why can’t they still be played in?

I bought a wooden Go set and of course it doesn’t automatically score it. Me and my dad have never played this game before and we don’t know if we even understand it? How should the following game in the picture be played?

There is no rule forcing people to pass. Usually people pass when they think that there is no way to make a living group inside an area of influence of the opponent. So they are volunteering to pass because they think each move they would make would die eventually.
In the beginning that is quite hard to see in advance so people tend to play till it is obvious to them. So in this particular game there is plenty of empty space (opportunity and space to make a living group) in the top left corner where black has two lonely stones inside white area of influence. Also it seems that trying to make a living group in bottom right corner could also work out.

All in all I suggest that you try to play with a slightly smaller board in the beginning. Like few tens of games in 9x9 board and then moving up to 13x13 board and finally after scoring is not an issue on 13x13 then moving up to 19x19. This way the learning experience is faster and better.

Well if I don’t know how to properly score on a 19 by 19 I won’t know how to on a 9 by 9 and vise versa. I think the rule is that territory is whatever area is surrounded by a single (same) color. BUT if you have living groups inside the territories they take precidence over the outer border and are counted for the other color.

One needs eyes to make a living group. In a sense each eye is territory that can be counted. If an eye is so large than the other player can make a living group of his own inside it then there is no territory to be counted for that “eye”.
There can be living groups inside living groups that are inside living groups etc.
On 9x9 board it is much easier to understand what kind of areas are needed to make a living group inside of them. The learning progresses faster and more intuitive since the area is limited and players are not lost in “infinite” variations.
Also if all is lost and this makes no sense what so ever. Then as last resort you could try to play with stone scoring it is ancient Chinese scoring method. Very elegant and easy to understand. On the bad side it is tedious to fill the board with stones until each group has only 2 small eyes.

Hi, you’re right that if there is a living group inside a larger living group, then the space inclosed by the inner group counts as territory for the inner group’s owner.
In the picture you posted, the space on the top-right quadrant that is surrounded by black is black territory, even though black is surrounded by white.
Notice however that the place near the top-right corner is not surrounded by black or white. If black was allowed to place two stones vertically, connecting the two stones that go towards the edge to the edge, then the space in the corner would be black because it would be completely surrounded. But white may want to try and prevent this of course.
In the same way, the space near the lower half of the left side is neither black nor white, as it is bordered on one side by white and on the other by black. Both players could try and gain soome territory in this space.

I hope this makes sense!

Your game is not even finished yet. There is no way to score it. An area must be bordered by only ONE party (Black or White) for it to be considered their territory. Anything not fully enclosed by either player is worth nothing. Even if both players agree to pass and agree to not play in an area anymore and give the whole area to the other player, it’s not possible to score it if there is no proper border. Only the top left and bottom right for White can be credited as White’s after passing.

It would be a lot more practical to actually play an actual game to the end here and find out yourself. It’s puzzling for someone to buy a Go set without knowing how to play, come up a Go forum of a Go playing website and prefer to ask in the forums then to actually play in the Go website when he’s already here.

If you’ve got no clue as to when to stop, I’d recommend playing with stone scoring: Fill every intersection you can without self atari or suicide, and then count the number of stones you have, ignoring captures. Eventually, Area scoring,where you don’t have to fill, and the empty points are counted as well and Territory scoring where you don’t want to fill, because only empty points you surround count, would become easier to figure out.

Think of your stone walls as fences enclosing land. When a player decides to pass, he is not only saying he can’t play to make a stone live, but playing anything inside his own territory would needlessly reduce his own score.

This board still has quite a bit to be decided. White has surrounded nearly the entire lower right quadrant. There are five black stones in there that don’t enclose anything. So black if black passes he is declaring that he does not think he can make them live.

White also has a large fence around the upper right quadrant, but there is a black group inside white terrotory that is very likely alive, but technically not there yet. That black group right now only has three points inside that white territory, every other point in there would have to go to white.

Now moving along, white’s fence really extends to cover the entire top half of the board. So in the upper left quadrant, black has two stones that right now would be called dead.

In the lower left quadrant black has his largest and really his only group that’s unconditionally alive. However that group has only two points of territory inside the eyes.

So right now, pretty much every point on the board besides the five points black has belongs to white.

So my short answer is, this game isn’t ready to be scored. My real short bit of advice is that black should not accept any of his stones as dead right now.