I am curious if there is a list anywhere on the internet of known nicknames of professional players, nicknames like “The Stone Buddha” and “The Angel of Death” always intrigued me and made me want to look into games, and it made me think that a list of known nicknames of pros would be an interesting way to find certain types of games and certain types of pro players. I tried searching sensei.xmp.net and didn’t find anything. Does anyone know if such a list exists?

That’s true, but I have heard quite a few in passing that I don’t even remember anymore, I wish there was some list for the ones that are well known. The number might be surprising, especially if there was help from someone who speaks other languages who could help share/translate them.

Honestly, the only source I’ve ever found for such things is Nick Sibicky videos on YouTube…

I don’t know and don’t particularly want to fact check all the nicknames myself but it could be a good start. (I’m sure being able to speak/read chinese, japanese, korean would help - as opposed to relying on only english translations/commentary.)

For instance on https://senseis.xmp.net/?SakataEio they say " He was called, the Inventor of Myoshu by Go Seigen and nicknamed, ‘the razor’ because of his fierce and brilliant moves during complex fights." - and it’s also mentioned him as “Razor-Sharp” Sakata in “Killer of Go” the book.

Kato Masao was supposedly known as (the) “Killer” according to wikipedia https://en.wikipedia.org/wiki/Masao_Kato, and nick sibicky and I thought I read something like this in a book too.

There’s other random things in senseis threads like here

“Takagawa Shukaku, in the fourth game of his ninth straight defense [sic] of the Honinbo title against Fujisawa Shuko (1960).
Takagawa, who was nicknamed “Wily Old Fox” (because he was believed to deliberately play bad moves every now and then to confuse the opponent)…”

I think in order to compile a list either trying to search through articles/profiles of players on sensei’s library, on wikipedia and looking at people reviewing their games (people who add in some background to the player preferably) might be the starting point.

There’s also a list of go players, https://en.wikipedia.org/wiki/List_of_Go_players , which includes some nicknames for Eio Sakata, Masao Sugiuchi, and Masao Kato.

Well, in that case, you’ll have to make one, @Safari_Atari no other way around it.

Here’s also one I just spotted randomly in a video (I wouldn’t have paid attention only for this thread).

Choi Cheol Han is supposedly nicknamed the “poisonous snake”. Wikipedia says his nickname is “The Viper” so it could be a translation thing.

This is the “sleepy-eyed rônin”, a reference to https://en.wikipedia.org/wiki/Nemuri_Kyoshirō.

A reference to his “great comebacks” where he came back from 0-3 to win 4-3 multiple times.

Something like “Hot-blooded boss”? According to the dictionnary, 親分 is used for the head of a crime syndicate or the like…

Something like “The penetrating flow”, I guess an image of a river that cannot be stopped.

ぶんぶん seems to be onomatopoeia for shaking or the habit of tapping one’s finger or feet on a surface. So I guess an idiomatic translation could be “A ball of nerves”.

Forgot this one. 中年 is middle-age, so i guess it is a reference to the fact that he got his titles when he was around 40. This page gives an overview of well-known professional and amateur players of the board game Go throughout the ages. The page has been divided into sections based on the era in which the Go players played and the country in which they played. As this was not necessarily their country of birth, a flag of that country precedes every player's name. For a complete list of player articles, see Category:Go players. The important dates that this separation is based on are: A Japanese census on Go play...

Maybe make that list into a wiki, so that we can add names is a good option?

Japanese streams now put nicknames on certain stream thumbnails. You can see on the right Cosmic Style vs Computer.

And apparently Ueno Asami is the hammer girl. Because her go looks like she’s swinging a hammer. 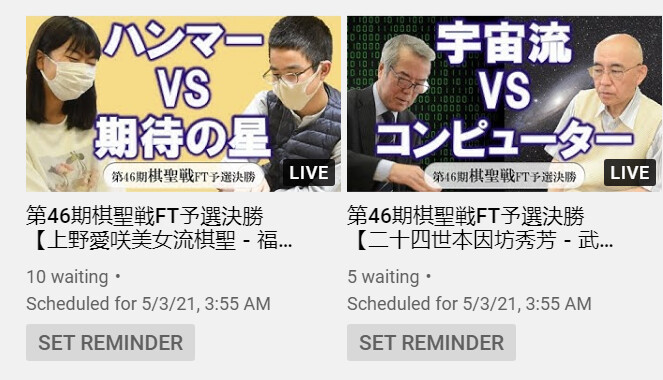 Have you watched Yeonwoo’s Classic Games with AI series?

Viktor Lin made a blog post on this topic in 2012 – Pros’ Nicknames According to Chinese Poker Cards.

(* “Zhuge Liang, one of the greatest strategists and scholars in Chinese history, his uncommonly two-charactered family name is synonymous with intelligence and strategy”)

Great to know! thanks

I just discovered this gigantic list of nicknames by pros on Foxy:

maybe not entirely on-topic, but this seemed like the best place to link it.