Confirm opponent before the game

Hi!
I’m a KGS user and recently started to play on OGS. I found a substantial difference:
when I create a game and someone accepts it then the game immediately begins. On KGS I have a chance to decline (or approve) the opponent before the start of the game.
Is it possible to have the same on OGS? (optional, I guess)

It has been suggested as a feature request. You may vote on it by clicking the link on the top called: “Vote for features!” or by going to http://ogs.uservoice.com and logging in.

Its a different behaviour yes, but just in case you are not aware, on OGS you can cancel a game before 19 moves and it will not do anything to your rank. So this is an option if you don’t want to play someone. Of course, that doesn’t stop them from accepting your next challenge, so its not perfect.

is it the right way to choose an opponent? test and try?

What do you mean by choose?
If you want to play with a specific person then it’s best to do a private challenge directly to that user.

In the essence of all that I want to able to cancel a match after I know the opponent. E.g. if he’s too strong or too weak.
Anyway this topic is irrelevant. If you want, you can discuss at http://ogs.uservoice.com/forums/277766-online-go-com-suggestions-and-feature-requests/suggestions/6894208-option-to-refuse-an-opponent-before-starting-a-gam

The strength of an opponent should be qualified by his rank. You can restrict the ranks of your opponents when you create a challenge: 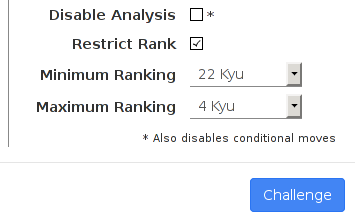 Didn’t know about that! Thanks a lot!