Congratulations for your level-up! 4段

Internet Go
DVbS78rkR7NVe March 30, 2020, 3:56am #1
New rank survey prompted me to play on foxy to gauge the rank difference. So for the past week I've been fighting there to rank up. And behold! I did it. I made to to 4d for the first time on foxy, I'm so happy.

And also at 4d you get a cool green theme for your profile. Unlike simple grey/black theme for all the weaker ranks to show that you really matter now. This is exactly the sort of motivation players need! 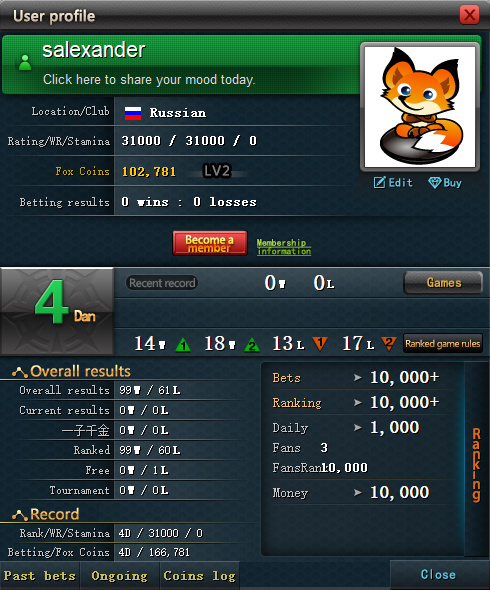 image490×590 164 KB
Ranking up on foxy is not easy. Out of 20 last games you need 14 wins to rank up. So 14 wins and at worst 6 losses. That's more than 2 wins per loss, even with weaker opponents this can be hard to achieve. Foxy really makes you care about each result because it'll matter for the next 19 games.

I opened up with a nice win streak of 6 games but then started trading wins and losses. One 0.5 point loss was particularly painful. And in the end in my last 19 games I had 13 wins and 6 losses. Just like in the movies, it all came down to the last game. If I win, I rank up. If I lose it’s all over, I’ll have to repeat my 6 winning streak again which wasn’t gonna happen.

I matched up with my opponent. And thus we started my final game. During first moves I opened their profile to see how they’re doing. It seems they were going to downrank, that gave me a moral boost. Unfortunately, foxy gave me white color. This seems like a trend, for some reason foxy was set on giving me white color all the time. And I don’t like playing white.

Of course, my opponent chose Kobayashi fuseki to build a moyo where I die. But (not that surprisingly) they messed up joseki and we fought, and I killed him. Giant advantage. Of course, that couldn’t end that simply. I went in his moyo too deep and almost died, to survive I was forced to give up an enormous corner. And the game suddenly became close. Luckily my opponent went too greedy in endgame and I finished them off with a simple DDK tesuji. It was all over, I ranked up. And now I’m bragging to everyone.

So you heard it. Around 2k OGS equals to 4d foxy! Frankly, ridiculous.

I know some people say they have trouble reaching high ranks on foxy probably because of aggressive style on foxy. But I think I was made for foxy, I really like fighting there. OGS is still the best server. But foxy is full of exciting fighting.

This raises a question. Can I quit go now? Is 4d foxy enough to call myself shodan and never play again?

Is 4d foxy enough to call myself shodan?

Is 4d foxy enough to call myself shodan and never play again?

I would like to personally welcome you into the “OGS dan retirement home”. We don’t play Go anymore, but we talk about it and reminisce. Any teaching game you give must have an “I don’t remember how to read anymore, sorry” in it.

Is 4d foxy enough to call myself shodan and never play again?

With just 18 consecutive wins, you could be 6th dan!

Ha! Foxy 4ds aren’t so scary after all, first game and a win!

first game and a win!

Just 17 consecutive wins, and you could be 6th dan!

So what is a Dan

A Dan is someone with a natural talent for the game who is on their way to being a pro or someone who has put too much time and effort into the game.

A dan player is simply a person who holds a dan rank, anywhere.

That’s all it actually means to be dan.

Of course, there is a correlation with skill, but the boundary of danhood can vary by more than five stones… so it’s just a book-keeping shorthand at the end of the day.

Personally, I would prefer it if the ranking system absorbed dan ranks into kyu ranks and gave us a new system in which one-kyu is the strongest amateur rank and, say, twenty-kyu is the weakest. This is similar to the gup system traditionally used in Korea.

Or for there to be a concrete boundary between kyu & dan, for instance one of the following:

But I would prefer to just do away with dan ranks.

Personally, I would prefer it if the ranking system absorbed dan ranks into kyu ranks and gave us a new system in which one-kyu is the strongest amateur rank and, say, twenty-kyu is the weakest.

We already have rating points. Tradition is the only reason we smush ranks on top of that at all… there would be no reason whatsoever to move to a different ranking system that has no traditional value

Dan is someone who has a good grasp of basics in go, a solid foundation, a generic competence. It is a point at which you finish learning elementary techniques and principles and start to figure out what go is really about. It is also an achievement.

That’s why foxy and some other rankings are laughable. They make reaching 1d too easy you don’t need to really know anything, 1ds there make absolutely basic technique mistakes. It’s entirely possible for a real dan to make a silly mistake also in a more complex whole board context. But when you make basic mistakes simply because you aren’t familiar with elementary techniques, you just aren’t a dan.

someone who has a good grasp of basics in go, a solid foundation, a generic competence. It is a point at which you finish learning elementary techniques and principles and start to figure out what go is really about. It is also an achievement.

If anyone says “I don’t need to study the fundamentals”, they are either 9p or are going to be 10k for life.