Why is the Mouse-over-game-description in the game graph so very confusing sorted? Is there a reason?
Are there any plans to make it more clear ?
.
But on the other hand, who do I ask, there is no sense of progress since months and the maindeveloper are very mute since the implementing of advertising. I lost hope

What exactly are you confused about? It seems pretty self-explanatory. Here, I’ll MS-Paint a quick summary.

As for the devs, what are you talking about? They have been doing and communicating a bunch about progress.

AHA! nice try s(a)Tan! trying to plant a seed of mistrust between us and the glorious developers. Your tricks will not work here, I am a servant of the Secret Fire, wielder of the flame of Anor. We love our developers and you shall not pass!

No seriously, it’s like three lines of settings, name, and conditions, nothing to be confused about. Or am I missing something and you are talking about something else completely? 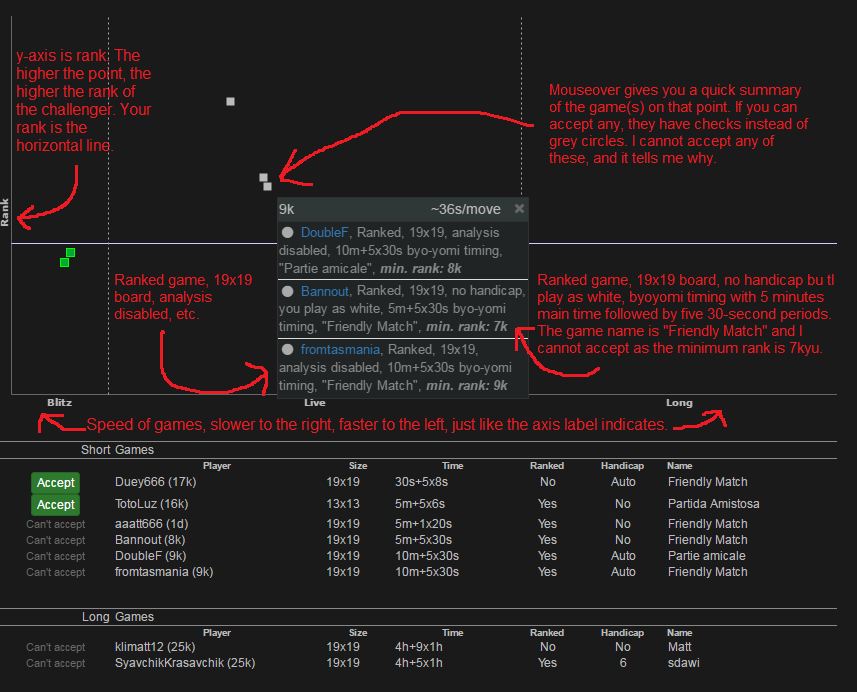 I don’t personally find anything wrong with the graph, it’s easy enough for me to read and understand the game i may or may not accept. As for the devs not saying/doing anything that is flat out wrong.

They are on the forums and reply to people and are time and time again saying they are working on the underbelly of the server stuff you might not see but make it much better they already have a huge update planned that fix a lot of bugs.

example is the j19 bug people get on mobile devices.

I just said, that the over-mouse-context-menu-design could use an overdue.

And about the developer: I like OGS, they did a very great work and if there will be no changes in the future, I will play further, because it is a great design. Although there is no development or bugfixes (as promised) for months now. It is okay because it wouldn’t need any to be a great design, I just said that I slowly lost the hope that there will any, and therefore its kind of hopeless (or at least i lost slowly my hope) to report bugs or make sugestions for better usability.

Of course this written in hope that the maindeveloper read it and progressing their work, because it is actually so good and need not much more to beeing perfect.

But on the other hand, who do I ask

Well, only recently @anoek posted this:

Thanks for the report and the digging things up, you’ll be happy to know that I was finally able to locate and fix this bug, it should finally be solved for good in the upcoming major release.

[quote=“HowToPlay, post:5, topic:9624”]
they are working on the underbelly of the server stuff you might not see but make it much better they already have a huge update planned that fix a lot of bugs.
[/quote]…

and then I look to the dates of these announcings…

We’re pretty eager for many reasons to get it out the door.