7d feels high to me.

Are you saying that there are, for instance, no IM-level Go players in Britain?

[Also, I think we should probably get a mod to detach this discussion from the main thread.]

7d feels high to me.

Are you saying that there are, for instance, no IM-level Go players in Britain?

I looked up some data and estimates:

There are only about 10k active go players in Britain. So it’s not surprising to me that there is less than one 7d+ EGF.

About 12 British go players (i.e. 1 in 1k players) are 5d+ EGF. So in Britain, 5d+ EGF in go is 100 times more common than IM+ in chess, after correcting for active player population.

Very interesting thoughts, kind of a shame to see them buried in a thread like this!

In all seriousness, this thread has flushed out a few good topics worthy of their own discussion, I’ve been wondering about that…

Yeah, this is already one of the best threads of 2021. 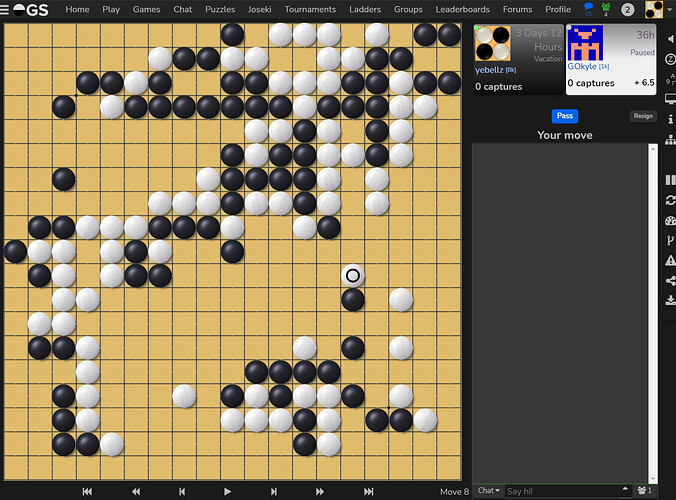 How to: Visualize go this way, instantly make it 30 times easier to count - #22 by yebellz

Are you sure about this? I haven’t followed chess for decades, but once upon a time, Grandmasters got the title by winning two top-rated tournaments (which seems to me like a better method).

I played music professionally, i.e., earning a professional fee, but never made my living from it.

There’s plenty of professional musicians who can’t make a living from it, sadly… Especially in the current pandemic.

Both is fun but Go is far better than chess, you’re just salty if you think otherwise

Board gamers are Gamers as well

I can’t see anything controversial about that.

Someone who has 10 years experience playing in an orchestra, after having concluded a conservatoire education, is without a doubt a professional musician

Thanks for increasing my vocabulary :D It’s obviously related to conservatory, but I’m not sure in what exact sense…

It’s obviously related to conservatory, but I’m not sure in what exact sense…

I think they’re synonyms, but “conservatory” also has the meaning of an archive, I believe. And I didn’t want to call it “music school”.

Cross-posting this idea at the suggestion of @gennan

Since it could possibly make a lot of people very happy, why don’t we just make the lowest rank one dan and then count up from there, say to around 34 or 35 dan as max. Then, everyone can feel good about being a dan!

We could even give our server a new name:

And 0 dan of course is equivalent to AGA/EGF 1 kyu.

The OnlyDans™ system is of course not that dissimilar from, say, the Elo ratings in chess, just rescaled so that difference in rating equals difference in handicaps. So it’s not that groundbreaking or controversial (except for calling them dan ranks

For go in particular this system is great because handicaps are close to linearly additive for small rank differences. One interesting consequences of following this idea through is that there would be much fewer ranks on smaller boards. This is true already for Elo ratings (shorter games have narrower Elo widths), but the effect is more extreme for handicap stones (one handicap on 9x9 is commonly approximated as four handicaps on 19x19).

Also related is the fact that handicap stones become worth more the stronger you get, so this system would have fewer ranks on top even on 19x19. But this is where it’s nice to be able to add extra precision at will. Even if most pros theoretically ended up between the same integer ranks, we can distinguish them using their fractional ranks.

All in all, this could be a really nice system. (although a traditional system based on winrates in even games certainly has advantages too, perhaps most notably being applicable to all games, and thus familiar to everyone).

I think a really interesting point to discuss is where would be the most natural place to anchor such a system. Would it be practically possible to make the 0-point completely random play? Then there are theoretically some negative ranks, but all humans should be positive. The question is if low ranks are well-behaved enough to make that system somewhat stable.

Would it be practically possible to make the 0-point completely random play? Then there are theoretically some negative ranks, but all humans should be positive.

All “reasonable” humans should be positive, but I guess reasonable is a bit subjective.

Is zero Elo (or any other point) anchored to anything in chess? The system just floats, right?

The question is if low ranks are well-behaved enough to make that system somewhat stable.

I think the very low ranks are a tricky issue for any rating system. Very weak players are often novices that are still learning and improving very quickly, so maybe their rank is not stable for long enough to measure reliably.

Yeah I’m not aware of any human rating pool which is anchored at random play, it’s probably a bad idea in practice (despite its aesthetic appeal).

A compromise could be to decide on some rank more in the middle as the “real” anchor (could use some bot to avoid having to pick human anchors as KGS did (does?)), but then estimate the distance to random play empirically, and offset the ranks such that 0 approximately lines up with it.

All “reasonable” humans should be positive, but I guess reasonable is a bit subjective.

It would certainly be possible to artificially deflate your rank below 0, there could even develop a subcommunity of players who are actually playing “misère go”, trying to get their rating as low as possible.

(although to actually be able to have the two groups coexist in the same rating pool, you would have to modify resignations and time losses such that when a player resigns or times out, the other player can freely choose if they prefer to win or lose the game)

Isn’t there used to only have Dan level system in Edo period Japan?

Although I am not sure when did the Kyu level system introduced in history. From the record I can find, a list of Taiwanese Go player in 1935 only has range from 15 kyu to 5 dan. And there weren’t any professional ranking back then.

Are you sure about this? I haven’t followed chess for decades, but once upon a time, Grandmasters got the title by winning two top-rated tournaments (which seems to me like a better method).

Only the FIDE Master and Candidate Master titles are based on solely on Elo in the general sense. IM and GM also require two or more norms over 27 games, where a norm (for the GM-to-be) is a performance of ≥ 2600 (not 2500) against opponents with average rating ≥ 2380 with the appropriate proportion of GM opponents, opponents from other countries, etc.

The relevant regulations can be found in the FIDE Handbook.

In its unabbreviated form, it said:

Of course, it also has to be noted that Elo inflates; and since the modern FIDE titles are basedly soley on Elo (since performance norms also derive from Elo) they also inflate.

Conrad trimmed my sentence down in his quote.

My claim was sloppy, though, since there are those exceptions you mentioned.

Sorry, wasn’t intentional. I guess I didn’t fully grasp it. I still think wins in high-level tournaments is a better system.