Nice that it is also vaguely avian. A dodo, perhaps?

I made up my own categories too 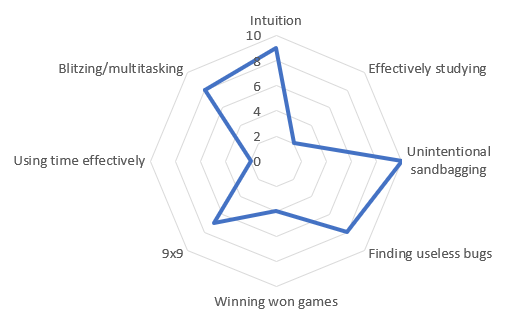 I’m assuming this is something like non-fighting preference (calmness) but also steadiness (composure).

The word itself means calmness. Consists of the characters for “cool”/“cold” (both physically and figuratively) and “quiet”/“still” (both physically and figuratively). So from the word alone I’d say it’s more towards stillness of mind, composure. I don’t recall it being used in relation to being fighty or not.
What exactly they meant if it wasn’t the literal meaning of this word I don’t know. Maybe it’s explained in the article somewhere?

I had used a dictionary to understand 冷静さ as “calmness” but my impression from reading the articles was also that it was related to composure. I mentioned fighting style because I also got that impression. But I could be mistaken as I am translating and often times words have different connotations with respect to Go.

Anyway, Kono Rin compared Ueno Asami and her little sister Ueno Risa: Risa takes profit by attacking while Asami is known for capturing, and while Asami seems natural Risa is more “しっかり者” (dependable? solid? firm? sensible?). The ratings were not directly stated in the description but with that description Risa was given rank-9 冷静さ. 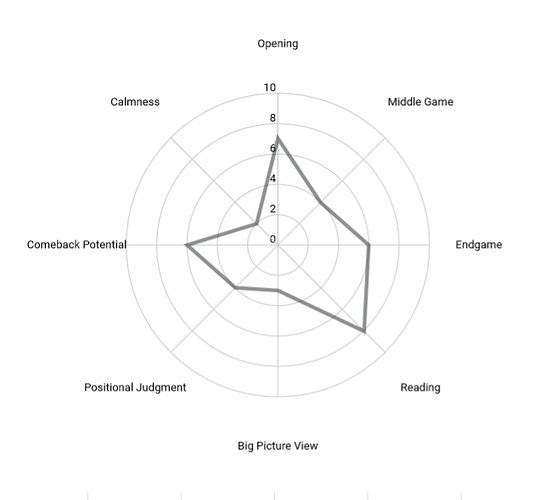 I’d say my opening is good enough, like almost everyone else I meet at my rank. Most often games are even according to the graph for the first 50 moves or so, and then it all comes down to one big middle-game misjudgment or misread. All the games I win seem to come about from some situation that requires reading, so it must be my best attribute, right?

I need to work on calmness. I get nervous, depressed and pessimistic in the opening, and then I blunder in the endgame if I’m excited about being ahead. Otherwise my endgame is pretty decent, which I think relates mainly to reading ability. I’ve made some pretty dire games even again at the end, so I’d say my comeback potential is also not bad.

I need major work on how I respond to being loosely attacked in midgame, or on attacking others, so I’m putting that down as positional judement and big picture view.

It’s almost certainly unrelated to fighting. When japanese commentators comment on someone’s fighting spirit, the terms 気強い（きづよい） and 気弱い（きよわい） are used. I recall hearing 静か(に) as an attribute of a certain move, but not 冷静. Maybe it could mean that in some contexts but the term itself is very sino and very formal so if it appears somewhere it’d be a go book.

しっかり means to do something resolutely and seeing it to the end. 者 indicates “the doer” like “-er” in english (listener, walker, programmer, etc). You could roughly translate it as a resolute person or maybe as a reliable (in getting things done) person.

This is a very nice topic. I will follow the point suggestion of the OP for my level and here is my self assessment on the original categories: 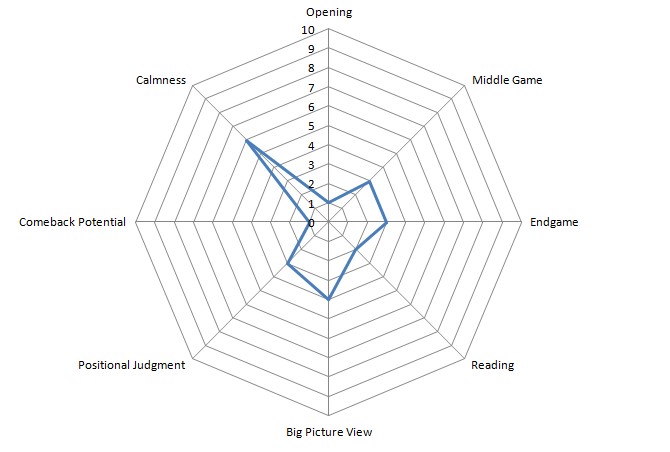 As usual, I am best to what matters least.

I come back sometimes by finding whacky ideas, but noone should call that a “skill”.

On some even better categories, here are my grades: 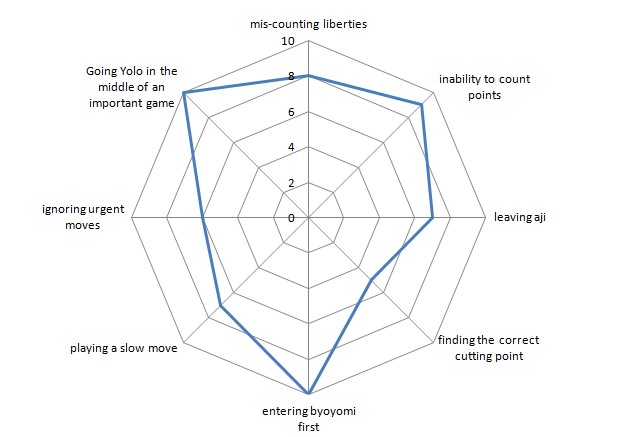 going yolo, especially in the national team games which I was expected to lose, is my favorite thing

The real playing style that I want to have - but I do not have the skill to support - is to tenuki all the time and eventually scrounge a little bit more points than the opponent gained by destroying my stones.

This post has become more fun than I expected so I’ll share my personal strengths and weaknesses. 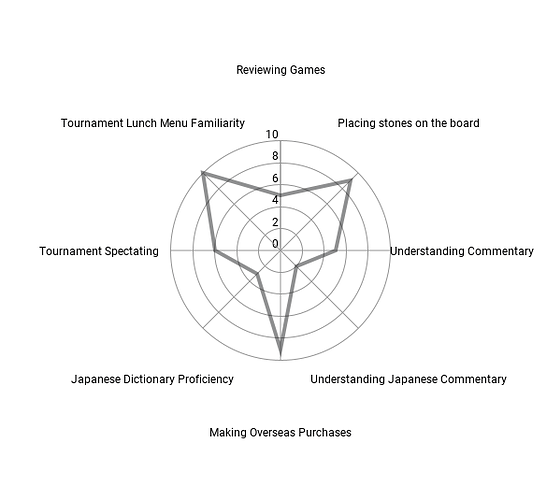 If the average of your self assessment against your level is less that 5, doesn’t that mean you’re really about to rank down?

(At least, if all the factors affected play-outcome equally, I guess it might mean that).

What I’m really responding to is the thought “how can a person with stable rank appraise themselves as worse than their peers in all aspects?”

The overall skill is not an arithmetic mean.

This exercise is just for fun. Maybe take it easier – you might be underestimating yourself.

Some skills are more impactful than the other, so you can be worse at everything, but that one skill that’s weighed the most will bring your “average” above the average. 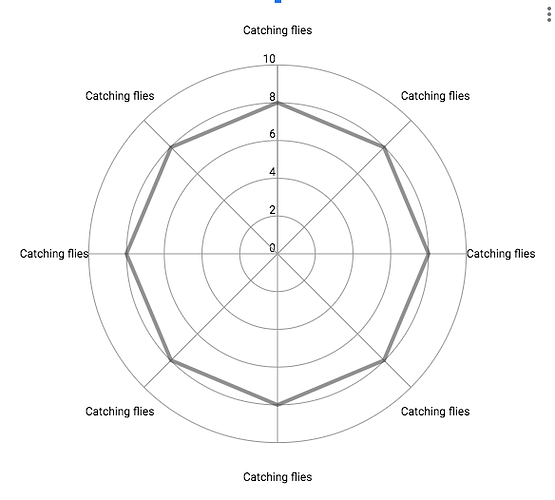 Took me a few seconds to read out the harder variations before arriving at the simple truth.

i haven’t even played go long enough for me to consider self assessment. i’m bad at everything probably.

Well, that is just a tiny spot in the bulls eye.
And that tiny spot only can become larger in time.