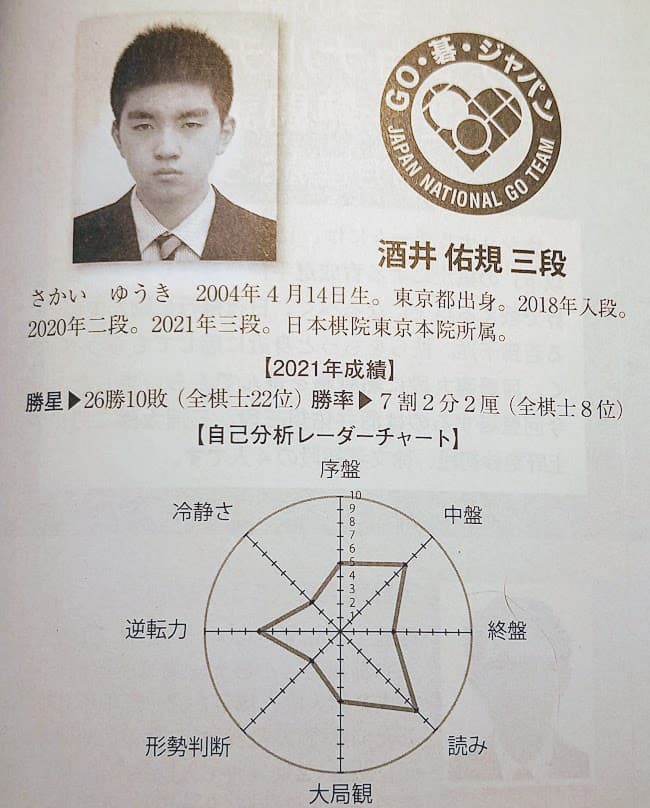 After a bit of self-reflection decided to do the same for myself. I came up with a scale of total points based on the rankings of the 4 players and then I allocated my own stats as a 6 Kyu (OGS). I do well enough in the opening and I have decent whole board thinking, but I make mistakes in tactics and reading throughout the middle and end game. I have basically no ability to turn the game around and while I may play calmly at first, I lose composure easily. 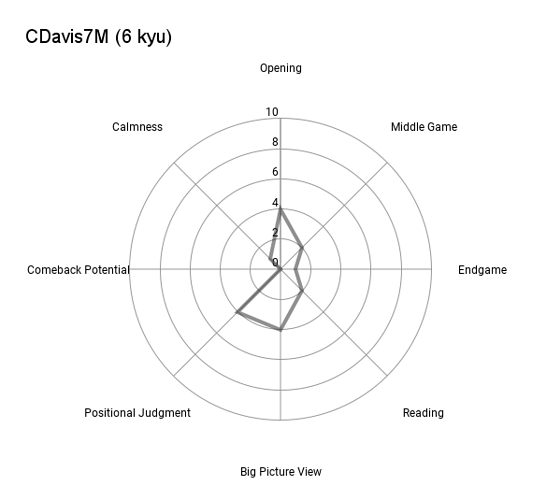 If you think this is an interesting exercise you can copy my Google Sheet to make your own chart: Go player stats - Google Sheets

This is such an awesome idea. I don’t think I could do a very good self-rating though. I’m curious whether some of these can be objectively quantified…

Seems like “comeback potential” is one that one could process some AI reviews and get a good idea for. Opening/Middle Game/Endgame too if you had a good heuristic for what constituted each of those…

I’m curious whether some of these can be objectively quantified…

Here is one project that created a tool for analyzing one’s Go style, strengths, and weaknesses: http://gostyle.j2m.cz/

We also have Go Style Horoscopes ☯ 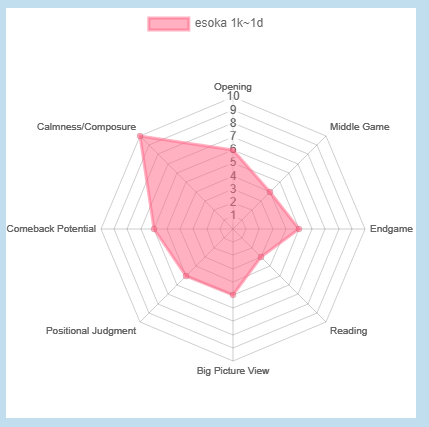 If you make reading count 3x to total and middle game 2x then you pretty much end up with a 0-100 point scale. 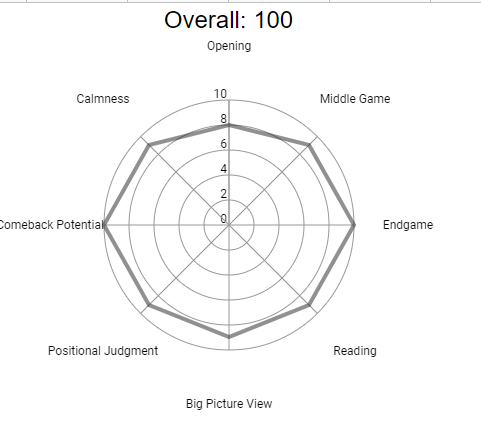 Why is sjs opening not 10? I think all top 10 professionals have a 10 opening, otherwise they wouldn’t have been there. Especially a monster with this winrate. 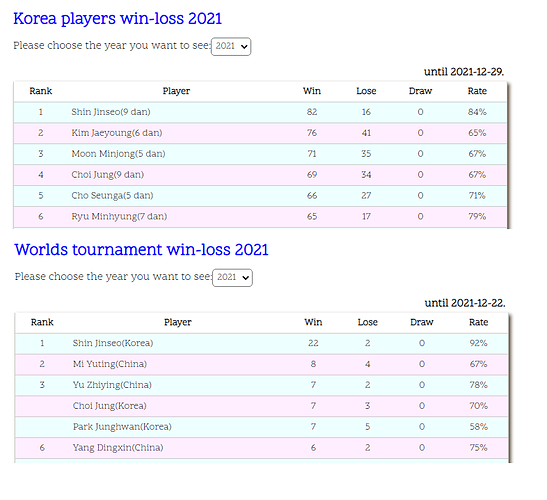 That’s an option but the OP had a professional with 5 in opening. Shin can have 10, though I don’t think his winrate is an argument for it - opening isn’t that impactful.
For example, I would stay consistent with Kono Rin’s rating and give myself around a 4 in opening. I lose like .1 point per move in opening. If there are bigger losses then it is a matter of fighting and positional judgement.

Here’s one for me, I think I am balanced but maybe similar to Sakai Yuk’s build. 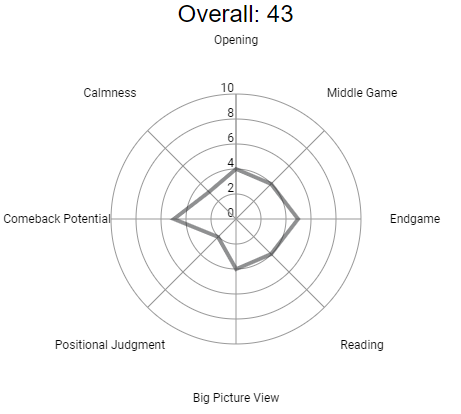 That’s an option but the OP had a professional with 5 in opening. Shin can have 10

I think I’m not the one to remind you about the enormous skill gap between “a professional” (most of them) and “the #1 professional”. This applies to all eras, not just the current one, too.

Do you think that being top 5 in the world you can still slack on something like the opening? If it was true then I don’t think the top 100 of active professionals would’ve been spending dozens of hours memorising openings from AI, something completely novel to the go scene. And not just “the openings” but all of their off branches and variations too.
And if you still come out on top against this then you simply can’t call your opening skills “mediocre” by any measure. It isn’t game deciding as you said, but we’re talking about the level where people would read for 2.5 hours (given the opportunity) before responding to a forcing move in order to optimise their play. When the mindset of optimisation is so developed I don’t think there’s a lee way for the opening to be bad. You’d have to specifically go “oh we’re still in the opening, well then I don’t care” and then switch to “how do I get a micro advantage from him playing keima instead of push” at an arbitrary time. I doubt this happens.

opening to be bad

gostyle only works with kgs or sgf files , how do i get my sgf files?

is that on a per game base or is there a way to mass download?

The app doesn’t seem to be working. I remember trying many things to clean up the SGF’s once before but I always got ‘Failed’.

What is the “estimated total point scale”?

For fun I did this self appraisal, considering the scale to be “relative to other people of my rank” 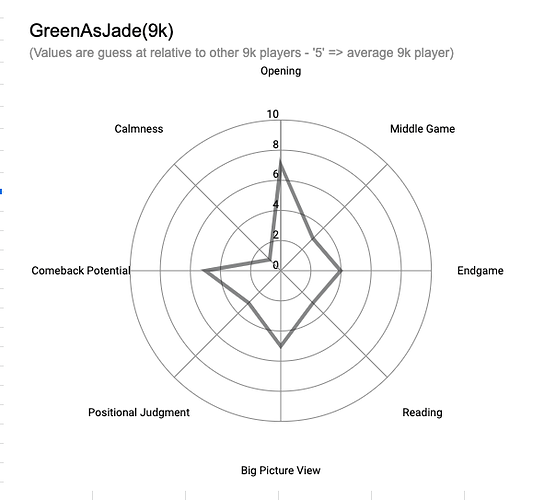 It says “The AI, and opponent feedback, often find my openings respectable. However, I stumble in the mid-game. I can recover out of dogged determination, but my reading sucks. I definitely get too emotionally engaged.”

For fun I did this self appraisal, considering the scale to be “relative to other people of my rank”

This is the clearest way to do it.

The other way with overall scales imitates sport simulation games as well as RPG characters.

The estimated total is just an assumption of how many points a player of a rank might having, assuming that higher rank players are stronger. This seemed to be the case in the 4 examples though a 2 Dan had more than a 3 Dan. So it’s not clean as I mentioned, use points you think you need. I’ll have to wait for April to see the next 4 JNGT players.

By the way, Ueno’s little sister was one of the 4 examples and she had very high calmness rating but apparently better than her sisters would be. I’m assuming this is something like non-fighting preference (calmness) but also steadiness (composure). So it’s not like it directly improves performance in all games.

Also, my understanding is that this team is for young players and that it includes non-professionals (of professional strength) and many of them will become pro. At least some of the team is pro.

I for my level (which I don’t know what it is, honestly) feel terrible at all those skills, maybe except comeback potential (but I tend resign early if I feel I’m losing) and big picture (but often I focus too much on a local attack). I just have good intuition and a lot of luck.

Similar feeling here. I think I’m maybe a bit better at endgame than my average opponent, maybe break even on reading and am worse at everything else. Yes, I know that’s nonsense, because if it was true, I would be weaker than other players of the same rank. But that’s how it feels anyway. 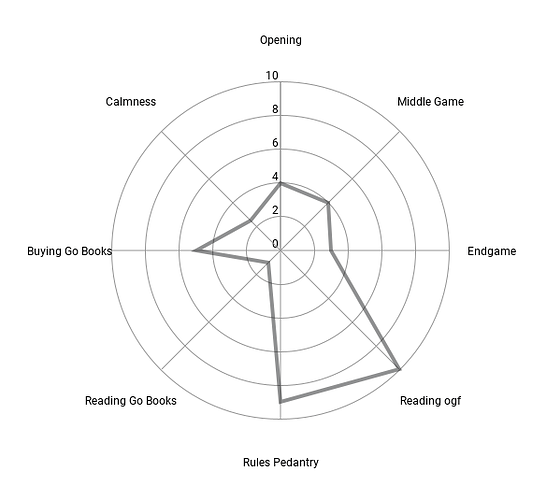 Making up your own categories makes this a lot more fun 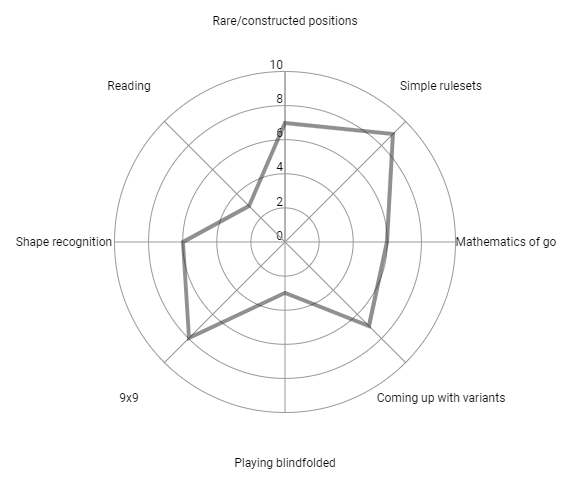