I lost this tough game against an 11 kyu player and would appreciate a review: 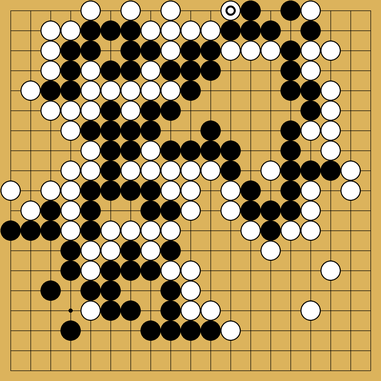 I’ll just comment about move 103. It’s just minus 7.5 points, so it’s not really catatrophically bad. Locally I would have considered H15 or H16 instead, but the AI simply insists that there are bigger points to be played. You can do a lot of harm with M2 and might even get out of that in sente, which would allow you to still fix in the H16 area.

This is not easy to judge though, I’m a 4 kyu and in all honesty I probably would have played H15 instead of M2 and would have gotten yelled at by the AI as well.

I left a few quick comments in a review. The AI thought you had a strong advantage between moves 54 and 103 because it thinks you can reduce White’s potential on the bottom right. But the AI is much stronger at reducing/invading than kyu players, so a position which is advantageous for an AI may be disadvantageous for a human.

corner-side-centre is important not only in the open games, but also in the endgame. Around move 94 it’s close to the endgame. You need to reduce the lower right of white immediately and get sente in the endgame. Your moves in the center are worth a little and you constantly get gote there. That’s the reason you lost so much points there.

In the future games, as long as all your stones are settled and there are no big frameworks to invade, make big points endgame moves in sente. usually it’s moves on the 2nd / 3rd lines and in the corner / edge.