DDKs don't see the importance of responding to 3-3?

I was playing down the pool a bit today and noticed that weak players seem to forget to respond to a 3-3 invasion. My last two games: 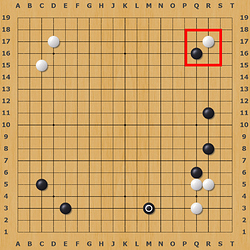 Pick up the standards, lads

real strength comes from knowing you can tenuki ANYTHING

Just a phase they are going through. If they get punished for doing so a few times, they will adapt their style.

Occupying an empty corner can be a good tenuki. Invading another 3-3 too.
Even later on the game a killing move or just a “threat to kill and build”…
So to say, but your games are surely not in this, so yes please answer my invasion or that’s going to hurt.

Well I still do like a bit the DDK 9k tenuki…

Well, let us say you invade the 3-3 and they tenuki. Isn’t that the exact same thing is they had played 3-3 in the corner first and you played the 4-4 shoulder hit ? There are a lot of josekis for that situation, so it really is not the end of the world if they tenuki, if they feel that the ensuing results are “ok” and the use of sente elsewhere is important

But I kind of do as a DDK in OGS

I’ve seen Katago play away too.

It’s not the end of the world, no, and I am sure there are scenarios where you would want to tenuki after a 3-3, but they are probably pretty rare, and involve unsettled life and death situations. If you tenuki, it’s like your opponent got the first play in three corners. In the example with the 9k, it would have been better to play a variation in which white gets sente, then extend along the side. Actually, anywhere you might want to tenuki after a 3-3 invasion, first consider playing a sente variation. If, for some specific reason, no sente variation works, then you can tenuki. This would probably be because of some unusual surrounding stones.