A thread for sharing your Go desktop screenshots. 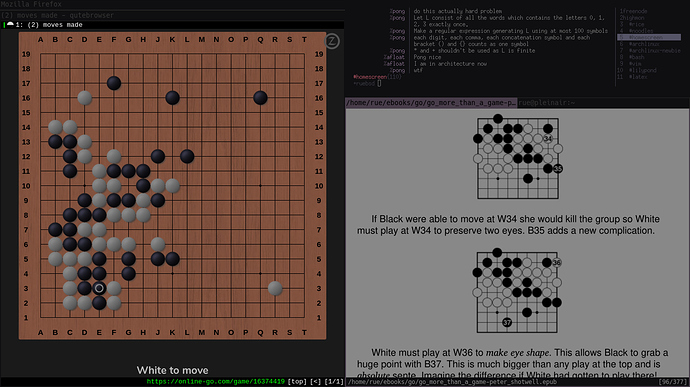 OS: archlinux
Windows Manager: i3-wm (tiling manager)
On the left half of the screen is quotebrowser showing a game I’m observing in OGS’ “zen” mode. Behind it is an instance of firefox browser - I find this workflow pretty convenient as it allows me to conveniently switch this portion of the screen from playing/watching a Go game to doing other things with a touch of a button. (which works pretty well on this small laptop).

On the right, I have weechat (IRC) on top and a book opened underneath.

For studying, I usually have a book opened on the right and sabaki (sgf editor) on the left so I can use it to play out the different exercises from the book.

As you can see from the book I’m reading, I’m still in the very beginning of my journey, but I must say, I’m really liking the beautiful design from OGS! Zen mode looks so clean and minimal! :)

The screen is dimmed down a little bit because I have redshift running (similar to f.lux for windows), which changes the warmth level and brightness of the screen at night to reduce eye strains.

Go on linux turns out to be a very nice experience - both OGS and KGS work flawlessly.

Got an interesting workflow or simply want to showcase your “go” desktop? Don’t hesitate to post in this thread!

And sometimes i get to play go too 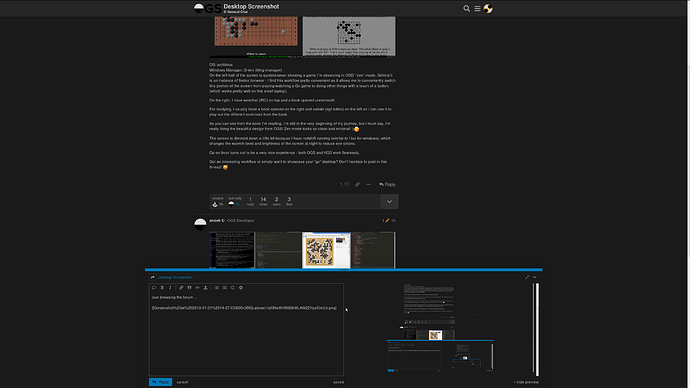 Of course this thread would be incomplete without a good shot of the chat room. You have to love all the excitement (and the occasional arguments) that happen over there day after day! 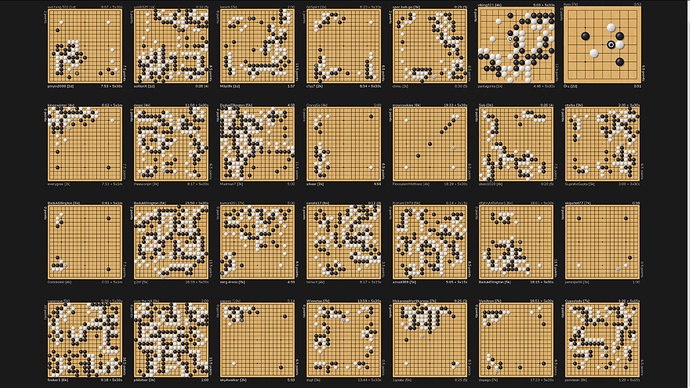 Well, I figured that I would give an updated screenshot. But this time it is the OGS Home Page. It seems that as an aspiring young coder I have shifted almost entirely to a dark theme (not because I like it, but because it is almost impossible for me to code on a white theme). In addition, I finally upgraded my machine to Windows 10 from 8, now that it has been out for a few years.

I have to say though, I have not been overly thrilled with the new OS so far. I actually went so far as to installing a Linux dual-boot a while back, and I loved Linux. But then my father came along and told me I had to get rid of it, because our family internet filter was not compatible (which I respect and understand). So now I am stuck with Windows.

Wow @yebellz! I would not be able to keep a hold of myself if I played that much correspondence at once! 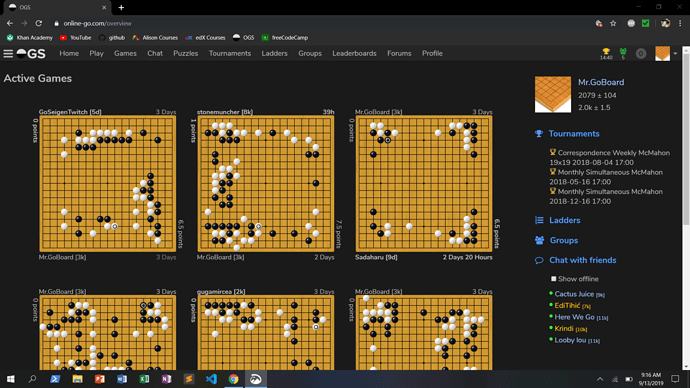 I would not be able to keep a hold of myself if I played that much correspondence at once!

What @yebellz posted is apparently a screenshot of the Games page, though.

All I had to do was take a closer look at the image. My computer is too small for me to be able to easily read the clock text below and above each game. If I had seen that, I would have understood it to be the games page.

But back on a messy windows 10 desktop. Nothing interesting but too lazy to dual boot and let’s face it, browser seems as relevant as OS these days…

I loved Linux. But then my father came along and told me I had to get rid of it, because our family internet filter was not compatible (which I respect and understand). So now I am stuck with Windows.

I’m afraid I don’t… What’s a family internet filter? Is that the firewall or one of those parental guards making sure their kids don’t accidentally click into unsuitable content? I’d have thought there would be Linux compatible ways to do either… But maybe it just isn’t locked down enough for the latter to be effective?

I am sure it’s parental guidance software… And while certainly this could be done on Linux, if it’s the kids install and dad doesn’t Linux it would make sense that a simple installer was not available and he would have had to have his kid admin the machine and install/activate his own filters and wouldn’t likely have much control or confidence that they were remaining in place… Seems as reasonable as parental filters.

Apologies for not further clarifying what I meant. To explain, it is more parental monitoring software than an internet filter. Essentially, it can watch what someone like myself does on the computer (not just on the web) and send back a report to the parents on what I have been doing via email. In addition, the specific software that my family uses can take periodic screenshots, use AI to make a prediction if content is suitable or not, blurs the image (for legal reasons) and sends it to the company’s severs. Then the blurred images are included in the email report for the parents. It isn’t perfect, but it is the greatest parental software out there in my opinion.

@VicktorVauhn is on the right road concerning the Linux situation. Unfortunately, the software is not compatible with Linux (surprise, surprise), and is only for Windows and Mac. My dad, being a non-Linux user, doesn’t want to try something else, and I don’t blame him. There are several wonderful options out there for Linux, but they probably are not as efficient as what we use. I hope that the company we use will one day put out a Linux release, but it is not hopeful right now.

For those interested the software is called Covenant Eyes and it is fantastic! Not free, but very cheap indeed. Please understand that I am not advertising them in any way, and am in no way anything beyond a user of the software. Here is the link:

What people do online impacts their lives offline. Protect yourself and family with Covenant Eyes Screen Accountability.

Can I just say how refreshing and encouraging it is to hear a young person speak so respectfully of their parents. I know many kids would bulk hard at this kind of monitoring (and this is not the place to discuss the pros and cons of such a system). For you to not only respect their wishes, but to (seemingly from your comments) also recognise the benefits of such a safeguard, speaks so highly of your character. <3 I don’t know what your situation at home is, but your words are so refreshing to hear from a young person.

Thanks for such a warm compliment, I do try to be a good person. There is a lot about my character that needs improvement, but I suppose that is the case for everyone. I also respectfully understand that this is not the place for discussing beliefs on such a subject, and will not carry this conversation so far as to cross those lines.