I was a bit tired to take this in last night.

So idea is to capture the g17 stone we know is there in the hopes of ruining eye space.

It’s very hard to judge this kind of tactic because there’s lots of unaccounted for stones.

@Vsotvep you have 9 stones on the board is it? So yebellz probably has 10? Does that make 5 invisible ones other than the ponnuki ones. 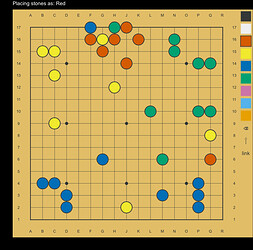 If yebellz just had stones at k16 and j14 which look like nice shape, capturing the g17 doesn’t reveal anything, and can be answered with an invisible Atari at j17 and I don’t know our follow up.

If anyone but me tries g17 we just self Atari the other two color stones. Similarly if red answers at e17 it would have to be Martin playing g17 capturing our other two stones and it’s a bad result unless… 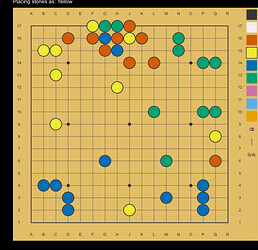 If the shape is any more solidly connected rather than loose we might just end up passing one of our moves to reveal some stones and then still self capturing our own stones giving back the eye space. 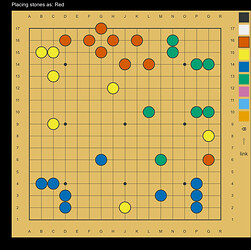 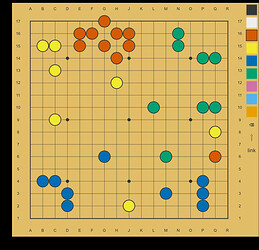 If yebellz just had stones at k16 and j14 which look like nice shape, capturing the g17 doesn’t reveal anything, and can be answered with an invisible Atari at j17 and I don’t know our follow up.

Our follow up is to have G17 been played by either blue or green in your example: that captures the yellow stone at G16, and fills up G17. With G17 ours, it’s impossible for H17, G16 and F17 to all become eyes, instead only G17 can become a (two-spaced) eye. So we steal two eyes with this:

Suppose yebellz is trying to make something like this: 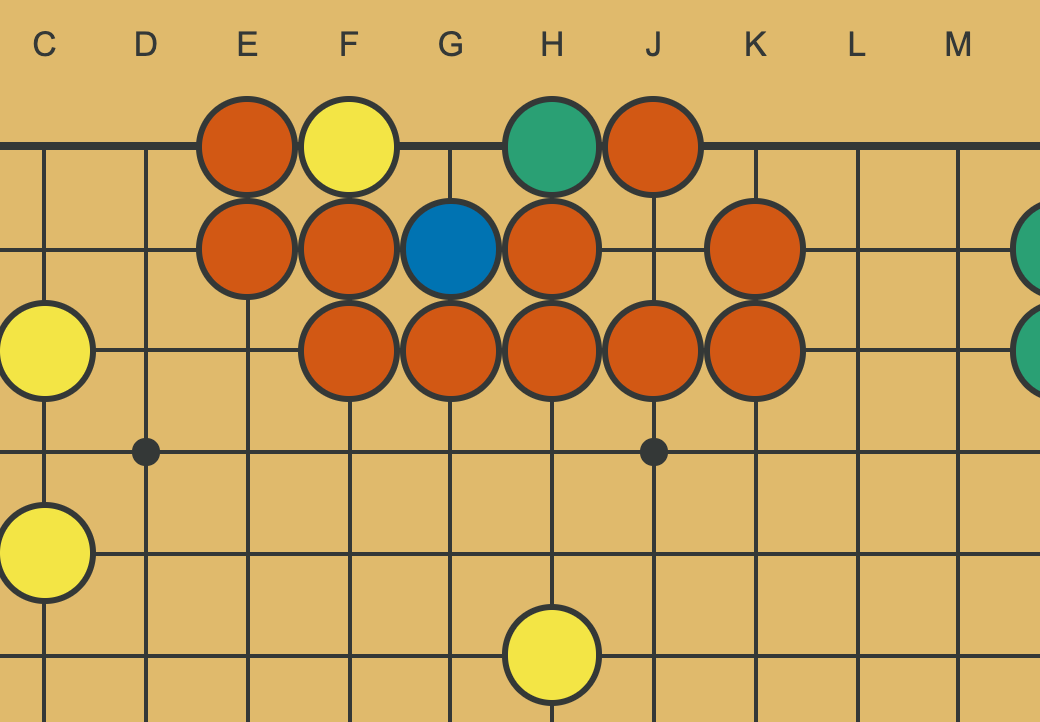 yebellz now has to recapture immediately, revealing to us the existence of E17 and / or J17. We captured one stone, yebellz places the exact same stone back where it was, so we’re in the same position as before, but have more information.

If yebellz does not recapture immediately, we play G17 ourself: 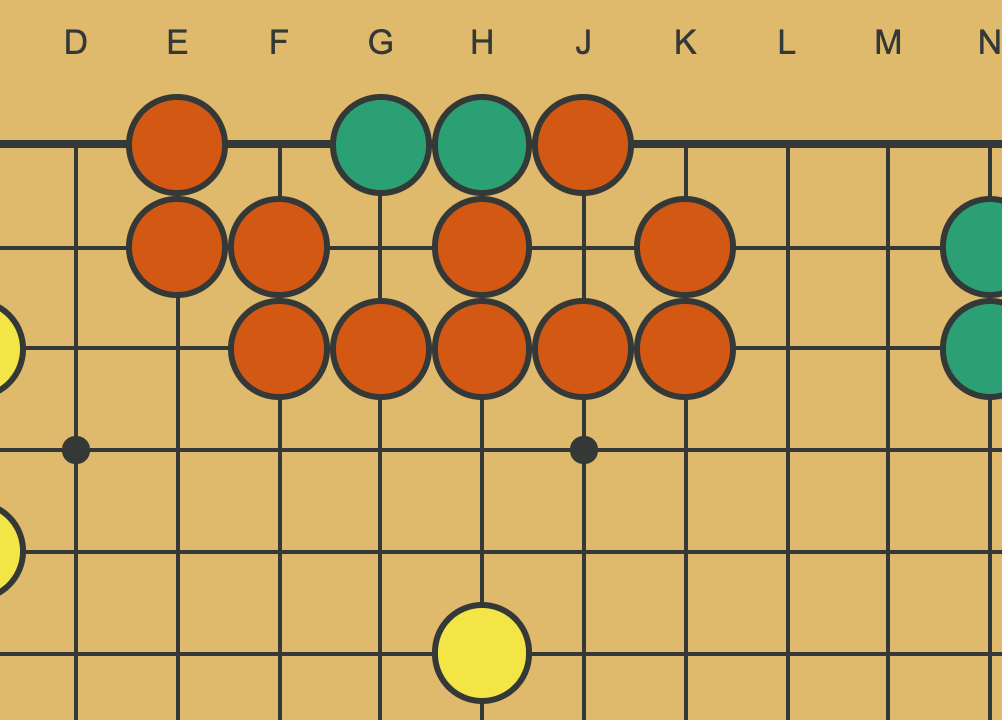 This will definitely capture our G16 stone and possibly our F17 stone, but we’ve collapsed three eyes to become one!

As for who should play what, I think our strongest plan is to capture this stone, and then next move be able to defend on the left side with yellow stones, and on the right side with green stones. That makes it best if I would be the one that possibly fills up G17, since my stones are not necessarily as valuable on the outside.

Hence, I suggest we play:

since I’m a bit more worried of a stone being at J17 than at F17, it would be good to test that side in case there is no recapture.

Our follow up is to have G17 been played by either blue or green in your example: that captures the yellow stone at G16, and fills up G17. With G17 ours, it’s impossible for H17, G16 and F17 to all become eyes, instead only G17 can become a (two-spaced) eye. So we steal two eyes with this:

I can’t visualise this at all. 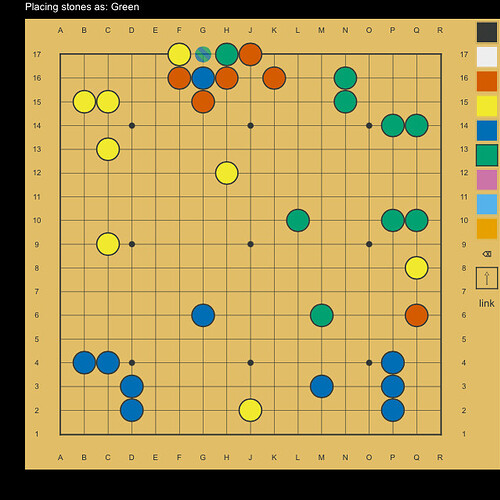 If blue or green play g17 all of the blue/green stones are captured no? I don’t think there’s any priority rules for capture like in the diplomatic go game?

If blue or green play g17 all of the blue/green stones are captured no? I don’t think there’s any priority rules like in the diplomatic go game?

Isn’t it the case that new stones capture old stones?

I don’t think so.

I don’t remember reading that.

I’ll look again though in the other thread.

It is even possible for the detectives to capture each other’s chains (most likely by accident). Multiple detective chains without liberties are removed simultaneously.

Oh… Well… That makes this game an lot harder, I think, also less like Go. I disapprove of this rule, but it’s a rule, so so be it

In that case, we still have a reasonable chance to get good information by capturing now, and unless both J17 and E17 are both already on the board, we can attempt to place G17 anyways: the two stones might have an outside liberty and thus survive.

If they don’t have an outside liberty, it’s very likely that yebellz will want to play G17 immediately after we played our suicide stone, so it would not waste a turn for us either.

Yebellz captured G16 with their last move. This gave us a lot of information, namely that they have stones at G17, F16 and H16 (G15 is revealed anyway). Why would they do so? I believe it means that they want to turn G16 into an eye.

Therefore trying to destroy that eye seems valuable to me.

Of the fours option maybe the outcomes are ok.

Honestly there’s too many variations with the invisible stones for me to come up with a good plan.

The only plan I had was that two players play from the outside while one tries to collide with stones to reveal the group so we know what we’re up against.

If we want to go for capturing g17 I’m ok with it.

If we don’t get captured, next turn I should attempt to play G17, since green and yellow are stronger on the outside. Or we get captured, and then we didn’t lose anything, really. 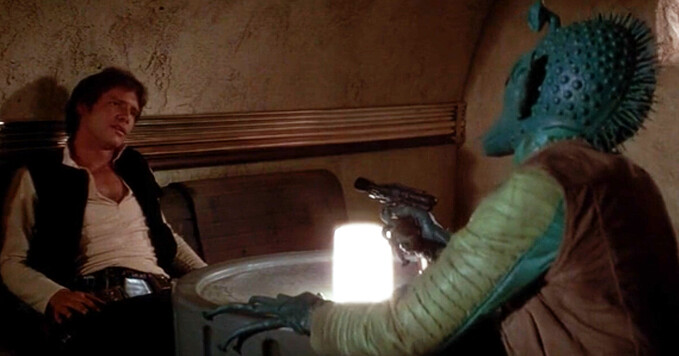 Two Four can play at that game. 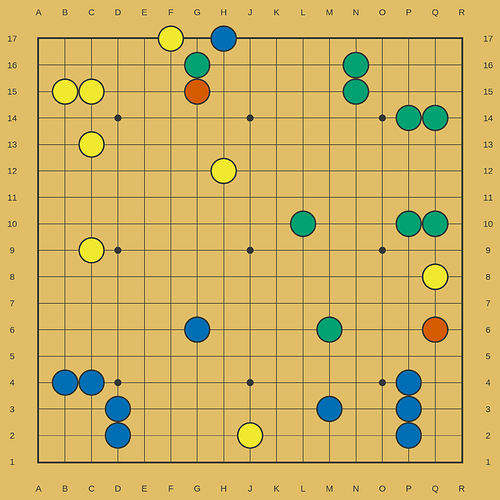 OK, so last move I suggested that I should play G17 now, which can be easily countered if yebellz has just played J17. I therefore suggest that instead shinuito plays G17. Perhaps we have managed to fool yebellz and is E17 still open. 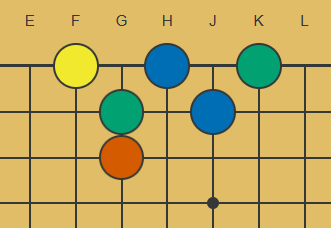 … then our group will be immune to capture 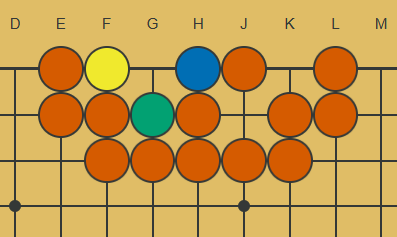 … we can simply re-capture and even add a move outside:

… however in this case, yebellz group needs only two eyes on the outside to live! 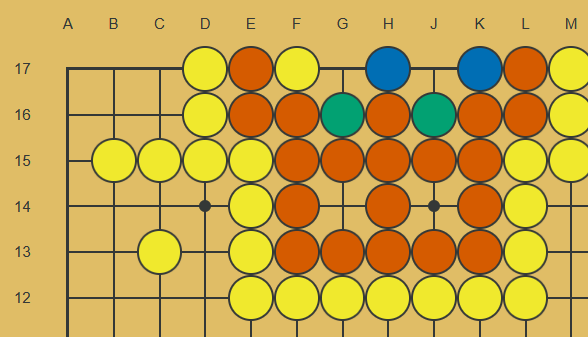 Not sure if / how this information helps us in the game, but it’s certainly interesting.

Yeah you seem to be on the same wavelength.

I’m still underestimating the power of 3 stones vs 1.

So happy to go with these ideas