This is the first game of Detective Go (see rules in that thread).

The game has begun (the fugitive has made his first hidden move), and it is now the detectives’ turn with this visible board: 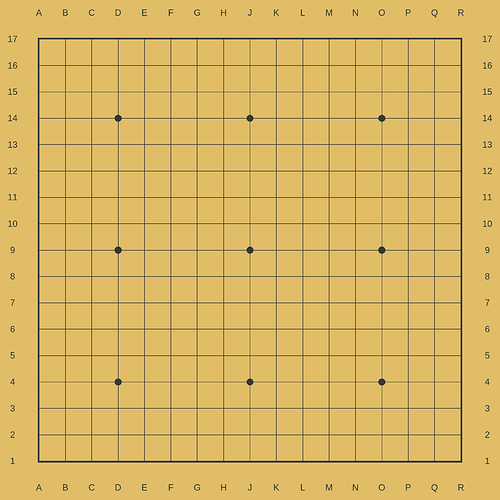 What do the other detectives think about fishing in the corners first? 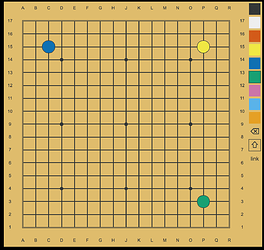 I was thinking simplest case to make a hidden 2-alive (2 eyes) group would be a ponnuki in the corner, and that would take four turns. The 3-3 points don’t exactly stop that plan but some ideas of shapes to try and pick out some possible sneaky corner stones. 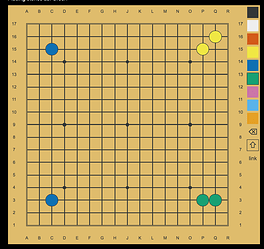 I’m not sure how to coordinate colors between corners since we can fill each others liberties.

(but actually just a general ponnuki somewhere would be annoying to stop.)

So would a better strategy be just to get a thin covering of the board early on? 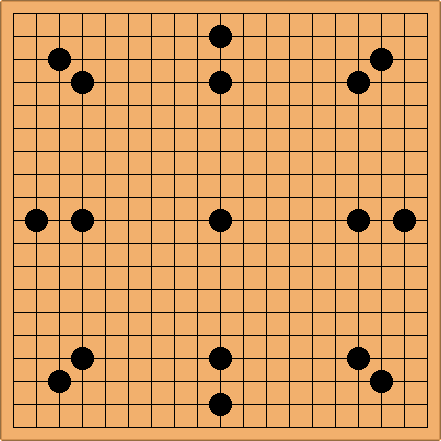 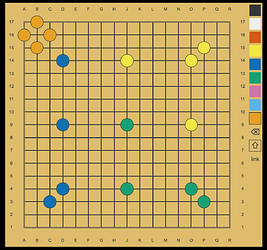 What is the minimum number of stones needed to form a group that cannot be captured by three detectives? We should keep in mind that chains that are adjacent to less than four internal intersections can be captured by three detectives. As a consequence, any chain of two or more stones in a minimal living shape must be adjacent to four or more (pseudo-) eyes. Due to the specific Ko rule sometimes single stones can get away with less than four eyes, as yebellz can immediately re-capture. With that im mind I have pondered some shapes that would form a living group: 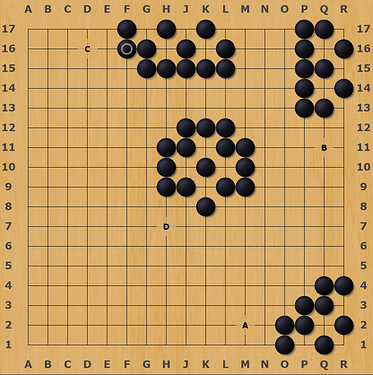 A is an example which does not live, because the big outside chain is adjacent to only three eyes and can therefore be captured.

Therefore B is perhaps the smallest living shape in the corner.

C is an example on the side, and D in the middle is notable because the one “false eye” is not a problem for the fugitive.

In principle, this game could be converted to a two-player game, with one person controlling multiple colors for the entire detective “team”, but then we would not have this interaction, which makes for a less interesting game.

I’d like to combine a very general search through all areas of the board with being unpredictable. yebellz will need at least about 12 stones or so to make a live group, assuming he’s not going for an optimal small-sized living shape in the corners (which would also be easy targets). We could cover 36 intersections before that can finish,

I suggest we let our scanning stones be chosen by random.org, trying to find places that are far apart but cannot be anticipated by yebellz. We should regularly try to place stones on the second line, since these are necessary for yebellz to live easier. If he tries to live in the middle, he’ll need close to 20 spaces for it, meaning it’s quite likely we’ll touch one of them at some point.

For example, I generated the following coordinates: 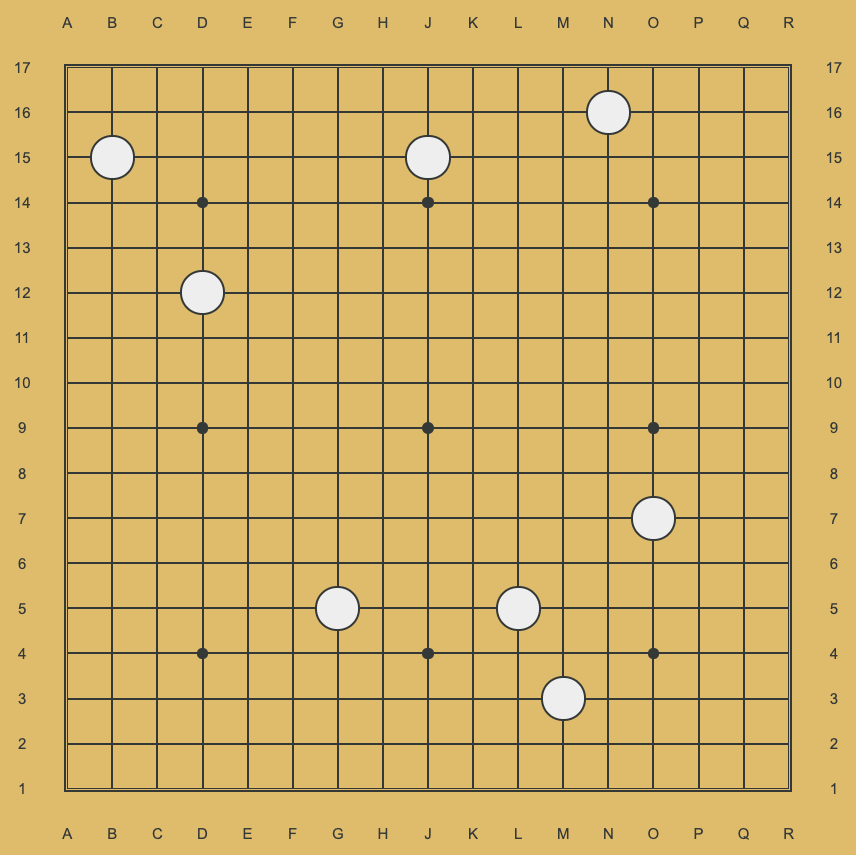 Giving priority to low stones, We could choose B15, N16 and M3, for example?

We may choose to try a random search, and if after a couple of moves we haven’t found anything yet, we may put extra attention on corners, then on sides, then on center to optimise our chances as well (since it will take more moves to live in the center, so we have some extra time to buy there).

I believe that yebellz should (and will) try to stay hidden as long as possible. Once we find one of yebellz stones we can “scan” the vicinity to gain information as well as slowly reduce the possibilities from a safe distance.

If we reveal a chain of more than one stone, we gain lots of information. Therefore, if I were yebellz, I might opt for placing single stones in the beginning, specifically in an alternating pattern like this: 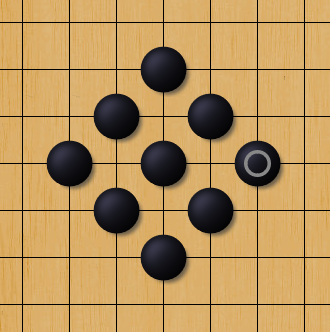 … and then try to consolidate the border.

I’m down to choosing semi-randomly, but probably some weighted distribution would be optimal. Don’t ask me what exactly though

Isn’t that diagram a single chain?

I assumed that diagonal connections were valid.

Another strategy though, could be to capture some of our lone stone as we fan out across the board.

That could give a ponnuki at whichever time yebellz chooses. Assuming we keep spreading out he could attach to our stones invisibly I believe?

That could give a ponnuki at whichever time yebellz chooses.

But it would be a ponnuki that is revealed to us, he’d still need the other three eyes safely connected to them.

The notion of chain is well defined by the rules of normal go. Basically two stones of the same color are connected to each other if they are adjacent to each other (not diagonally) or if there exists a third stone of this color that is connected to both of them.

//Edit: Forgot to mention: A maximal set of pairwise connected stones is called a chain.

Giving priority to low stones, We could choose B15, N16 and M3, for example?

Seems like a solid first move. I agree to playing this.

Going forward, as long as we haven’t revealed any of yebellz stones, it seems to me that trying not to mix our three colors too much could be a good idea. That way we avoid capturing each other indirectly without knowing.

The three detective stones were all played successfully, and the fugitive has played another turn: 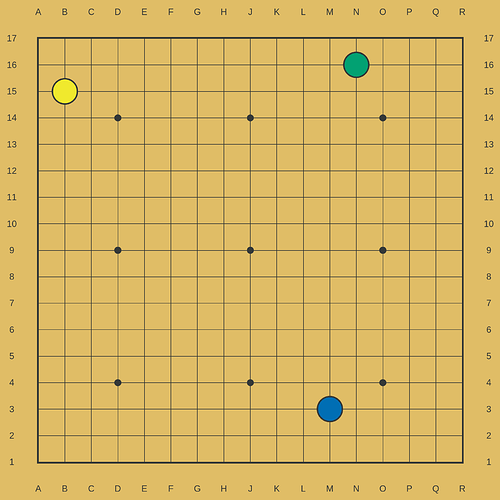 Here’s 10 random moves that were suggested: 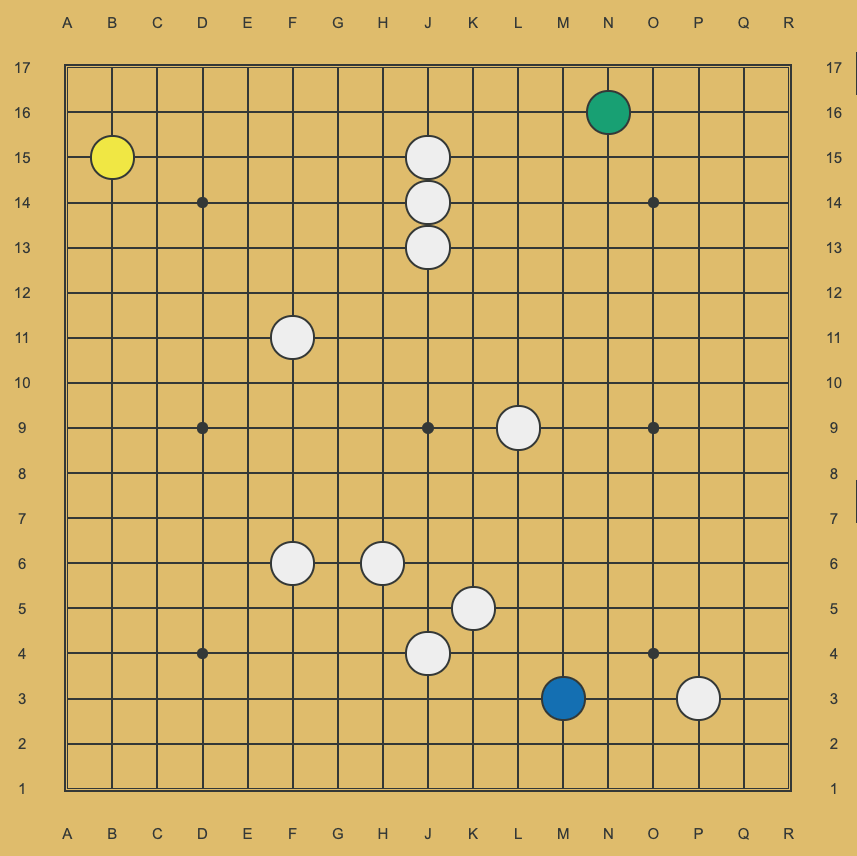 Seems like the J column is popular this round

Second time I tried, it really loves the P column: 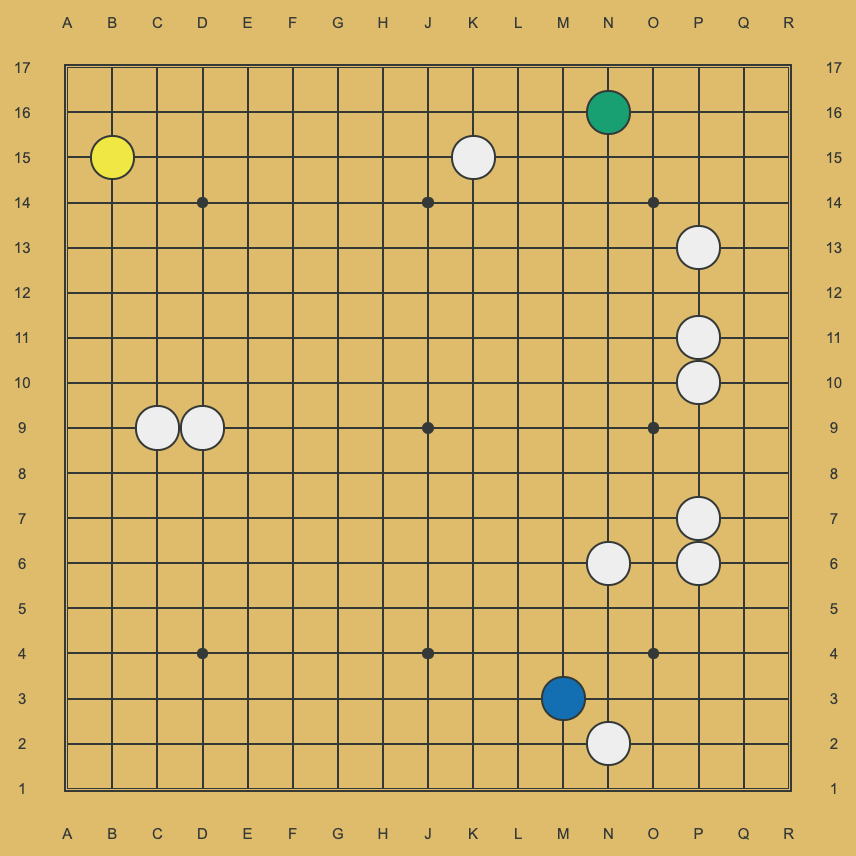 I was hoping it would give us some random move in the lower left, so I tried a while for it to play there and got C4.

If I had to choose from these options, I would go for P10.

I also think that playing a stone in the vicinity of the lower-left corner would be sensible.

I also think that playing a stone in the vicinity of the lower-left corner would be sensible.

Does C4 sound good? Or shall we go for C2 or B3 instead? The ponnuki in a corner tactic seems quite scary after all.

C4 looks good to me. I agree that the ponnuki in a corner tactic is scary, but yebellz would still have to develop it into a group like example B from above, and C4 seems like a good first spot to disrupt that in one direction.