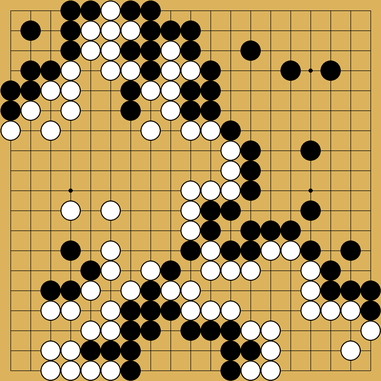 The final diagram shows nearly 38 blue points which I think should be counted as white territory?

I haven’t tried to count carefully, but I don’t think the correct score is a black win by 14.5 points.

The AI review also shows white in the lead, I think! White +26 at the end.

No, those blue points were marked as dame, for some reason.

Our automatic scoring system (which is used with games versus bot users) is not very good at recognising dead stones. It’s best to remove all the dead groups from the board before passing (in this case the two black stones at the top in the white territory seem to have confused it).

There are plans to improve this system by integrating a strong AI (KataGo) into the scoring phase, so hopefully these problems will be solved in the future.

Thanks for confirming it.

So does this mean it’s best to play Chinese rules and continue playing until it’s completely clear which stones are dead? I think I learned Japanese rules, where you don’t play in your own territory, as you lose a point ( I think! ). I think I understand, but still not completely clear what to do if you are playing Japanese rules ( which wasn’t the case in the game I posted ).

But yes, if you have the option, I’d go for Chinese rules.

Thanks ever so much. I tried another game, and maybe went to an extreme… I didn’t stop until 186 captures ( and black had only a few scattered stones left! ).

Do you mean they could live with best play from each side? I thought not, but I may well be wrong.

I put one variation, killing is not that obvious.

Our automatic scoring system … is not very good at recognising dead stones.

From what I remember, KGS’ scorer doesn’t even try – it assumes all stones are alive until marked dead. I may be misrecalling, though.

From what I remember, KGS’ scorer doesn’t even try – it assumes all stones are alive until marked dead. I may be misrecalling, though.

I think when playing Human vs bot though you need an auto-scorer as I imagine it’s too easy for a human to mess with the score and I’m not sure how easy it is to program the ai to argue with the human over the score.