What happens to one’s rank when we play with handicaps but less than what we are suppose to get and we lose the game. Does our rank go down? And how do we figure how many handicaps we need? Thanks.

Each point of handicap causes the ranking system to treat your difference in rank as one closer.

these two cause each player to have the same change in rank: each is considered an “even game” for ranking purposes.

These two have the same ranking effect - each is considered to be an unbalanced game of 2 stones difference.

(Note that this is "in principle. Glicko rating->ranking conversion may cause some not-exactly-true about this, but this is the idea, as I understand it)

You could certainly apply two stones to yourself, however Handicaps are generally only used for training games. Rarely are they used for ranked matches. If it is a non-ranked match and your opponent is cool with it, go for it. But when ranked, or if your opponent was not consulted, then I would say you shouldn’t use a two stone handicap.

Also, what board size are you using? A 2 handicap on a 19x19 isn’t much of an advantage to DDK players. But a 2 stone handicap on a 9x9 can easily be a game changer. Handicaps on a 9x9 are almost unheard of in ranked games on the 9x9, unless the handicap is small and the gap between player skills is 15 to 20 stones; from what I’ve seen in actual games.

Rarely are they used for ranked matches.

This is an OGS thing though, on other servers such as KGS or IGS it’s a lot more common to play ranked games with handicap. Also, on OGS there’s nothing against playing with handicap, and as it’s generally a good way to be able to play with each other regardless of rank disparity, I would recommend to play with handicap if you find it more comfortable.

You’re allowed to do anything, but I would play with 2 stones only against opponents who are 2 stones stronger, not against equal ranked players. I’m not sure if that’s what you meant.

Anyway I don’t think it’s necessarily bad to play with handicap stones unless you don’t like getting star points (apparently you can free place with Chinese rules). Playing with 4-9 stones does change the style of the game though and the stronger player will have to use their strength at invading/reducing/fighting but that’s what makes it even, and sometimes even enjoyable

but I would play with 2 stones only against opponents who are 2 stones stronger, not against equal ranked players. I’m not sure if that’s what you meant.

If I am 10k and you are 12k then I am referred to as 2 stones stronger than you.

But ranked or if your opponent was not consulted, then I would say you shouldn’t use a two stone handicap.

I would like to refute this point if I may.

And indeed, the supposed alignment with 1 rank equals 1 stone depends upon a significant amount of ranked handicap being played.

At OGS (as has been observed) we for some reason don’t play handicap by default. As a result, our ranking system would (theoretically) be prone to drift.

It will take a large amount of time to notice this drift, even if it occurs, because “calibration” of Go server ratings is so subjective in any case.

So if you play handicapped ranked you are actually helping in a small way to maintain rank-rating alignment.

And you can chose any amount of handicap, up to 9, that you like. If you chose the amount that is the difference of your ranks, then you would expect an even game. If you chose a different amount of handicap then the game will be uneven in the same way as if you were differently ranked by the amount that you can compute (rank difference less handicap stones).

I think things would start to get wonky when you exceed 9 stones - this is an arbitrary number, but it does correspond to the star points all being taken, and it would be naive to expect the relationship of 1 stone equals 1 rank to extend indefinitely. That’s why 9 stones is the maximum amount of rank difference that the server will let you play, ranked.

As a result, our ranking system would (theoretically) be prone to drift.

Thank you for such a long reply Eugene. I have never heard of drift before

I mostly play 9x9. Sometimes 13x13. Handicaps can be brutal on the 9x9. As such, i have tried advice from this article when playing with handicap: Handicaps For Smaller Board Sizes.

Handicaps can be brutal on the 9x9.

They can also be a lot of fun. I gave a total beginner (first game ever) 6 stones on 9x9 once and as intended she won by a small margin.

I have never heard of drift before

In theory, the way that our ratings ought to correspond to one rank per handicap stone is by “corrective feedback”, where everyone plays handicap.

So if I play someone one rank better than me, and they have one handicap stone, and I continuously beat the, then I will rank up. Then if I don’t beat them without one stone I will rank back down again. In this way, one rank will come to equal one stone across everyone’s ranks.

However, OGS doesn’t really have this corrective feedback. The way that 1 rank equals 1 stone on OGS is that at the time the new rating system was introduced, a formula for rating->rank was deduced that gave everyone ranks that “seemed right”. And “seems right” means “comparing to other servers, and our own results, so that people’s ranks appear consistent”. This means that IF we assume that generally people have been playing handicap, and one rank equals one stone, then this would also be the case for OGS at that time.

But now if people’s abilities change, or the makeup of abilities in our rank pool changes, there is nothing to keep 1 rank equals 1 stone “aligned”. That’s what I referred to as “drift”.

Beautiful. Thank you so much for taking the time to explain all of this to me. I sincerely appreciate it, and your time

Just on the “we don’t play handicap by default”. Is it that the majority of players don’t play with handicap, or that the default setting in auto match is not to use handicap stones?

I don’t think I’ve changed any settings, and it looks for people ± 3 ranks, which seems playable, and it says default is enabled for handicap. So if I play someone 2 ranks weaker/stronger than me and both used automatch but left the handicap settings on default would their be any extra stones?

About 9.6% of all players
and 23.8% of players with at least 10 ranked games
in this sample had played at least 1 game with handicap

Thanks for those numbers, flovo. That’s actually more than I thought.

Thanks also for the numbers. I’m still a bit curious about how the automatch works. It doesn’t say in the faq/documentation whether the default setting is to use handicap stones or not.

What I would assume (and this could be way off) is that it ideally would like to pair you with someone of the exact same rank first if possible. If you are open to playing people of higher or lower rank it looks for those too (or afterward?).

Then for a pairing where one person has a preference for(against) handicap and one is set to default I would guess it goes with the opinionated persons preference of some(no) handicap stones or reduced komi etc. If neither player has selected a preference, I wonder how it handles that case.

Edit: I guess this is a partial answer in something you linked where in one case it is not the default for people with high deviation in ranking

Click ‘settings’ next to the quick match finder, choose what game type you want your settings to affect, then you camn choose if you require, prefer, or have no preference on handicap stones to be used or not.

If you really want to use handis, then require them to be used. Or if you really don’t want those, you can require for non-handi game as well.

If you would also be fine to play w/o handis if your opponent doesn’t want them, choose prefer. The ‘prefer’ will be overruled by your opponents ‘require’, so if you prefer a handigame but your opponent requires non-handi, it will be without handicaps, thou in this situation you will not be paired if there are also other users with more matching settings nwho are searching a game via automatch.

With ‘no preference’ you’re basically letting your opponent choose if you’re using those or not. If both players have no preference on handis, then the game will be even. If the other player prefers or requires handi or non-handi game, that will decide if there will be handicaps in use.

Note that there is similiar R/P/NP settings for time control and ruleset too, if you happen to have strong opinions on those.

Just to note that the “Settings” dialog says “default is disabled” which I take to mean that if two players each have no preference, then handicaps will not be applied.

Similarly in the Custom game dialog, Handicap is set to “None” by default.

That’s what I mean by “at OGS the default is no handicap”. At least one, and maybe both, players have to take an action to be in a handicap game. 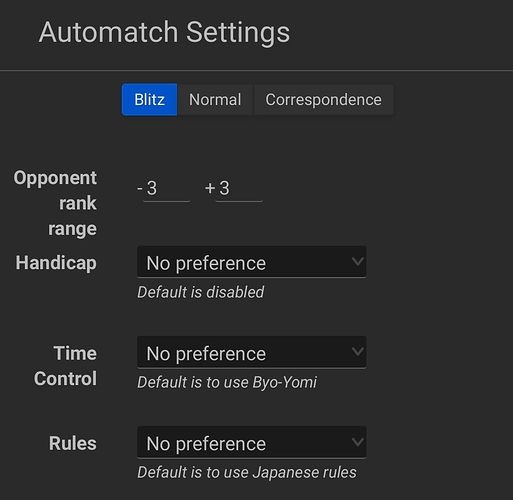 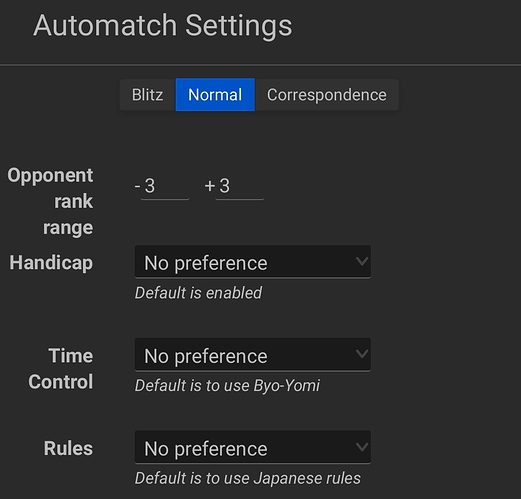 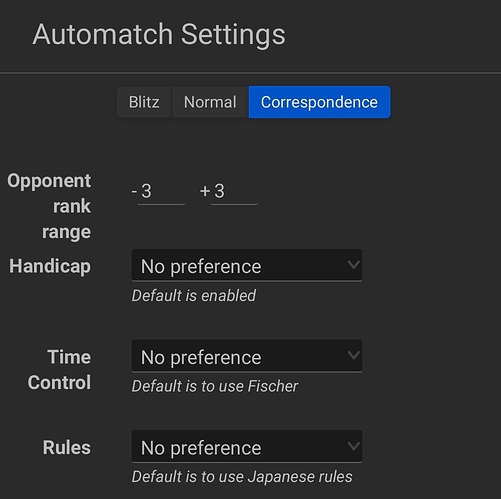