I think it’s impossible to completely remove bias, but we should try.

Further, I think that Go skill is only a small part of Diplomatic Go skill. In fact, I think that negotiation and communication skills are far more important than the rest.

In the absence of a move submission from @Maharani, Round 7 will be extended 24 hours.

Sorry y’all, real life got busy for a hot minute.

I’ll try to remain peaceful as long as possible. I’m playing at H5. (No rule against announcing my move here, right?)

Of course not! Depending on the situation, other players may use that information against you… but then you might also be bluffing. So there’s some interesting strategic uses of announcing moves.

@martin3141 collided with their first move at C4 with a preexisting stone, and with their second move at D2 with the first stone placed by

As the only group without liberties,

@Sanonius’ group at D3 is removed from the board. 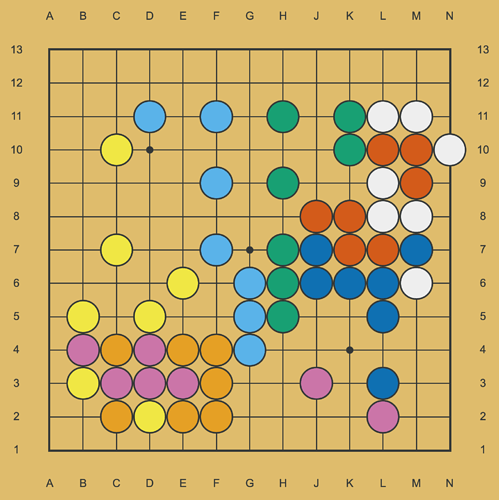 In order not to be eliminated at the start of next round, a player needs 1 or more stones on the board.

Round 8 starts with the following position. 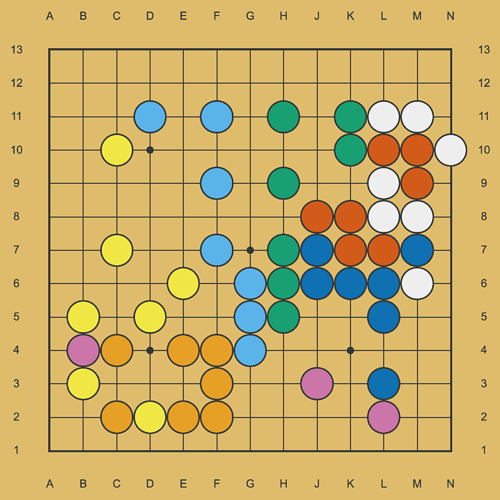 Exciting with such an early big capture! If we had gone with the original N/2-rule I proposed, pink would already be eliminated here. I think this is a good argument for N/2 - 3 being better, since pink still has a promising position in the lower right.

Yes, you’re right, players with less than 1 stone will be eliminated, hence players need 1 stone or more to survive the next round.

I’m not very good with numbers

When you made the previous post about needing at least one stone after 7 rounds, I was somehow completely convinced that you had made a mistake, and it was not until I started writing the message explaining why that was wrong that I realized that it was completely correct

(point being, N/2 - 3 is deceptively confusing)

It caught me by surprise as well. I was planning on announcing it in round 5 if I had known it was a thing by then.

Yeah, numbering the rounds gets potentially confusing. I like to think in terms of “When I have placed N stones on the board in total, I must have at least N/2 - 3 stones still on the board” (or to be technically correct, “When I’ve had N chances to place a stone on the board…”)

My respect goes to @PiggyStardust for staying loyal to their friend @martin3141 and helping him to keep bugcat and me out of that corner, even if they could have worked towards the top-left, leaving martin and me fighting it out. Well played.

Whatever deal they may have, I would say it has enabled both of them to achieve very promising positions so far.

Thanks Sanonius and sorry about that, but together with your lands you also inherited war, and according to our policy ancient deeds cannot be redeemed by fresh statements.

We’re still getting to know each other.

In the absence of a move submission from @Sanonius, Round 8 will be extended 24 hours.

Sorry for the confusion!

@Gia submitted the exact same three moves in the same order, and thus collided with each other on all of their moves and failed to place a stone this round. All other players succeeded in playing their first choice. 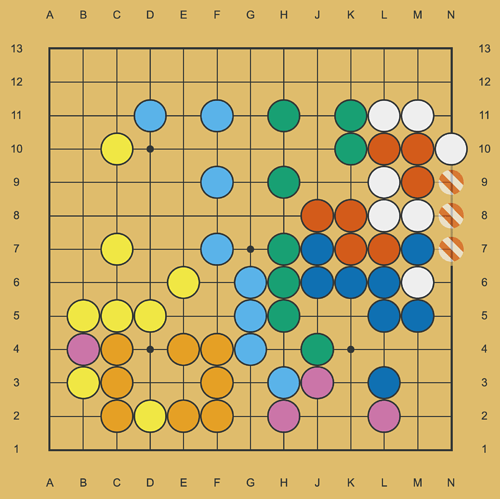 Round 9 starts with the following position. 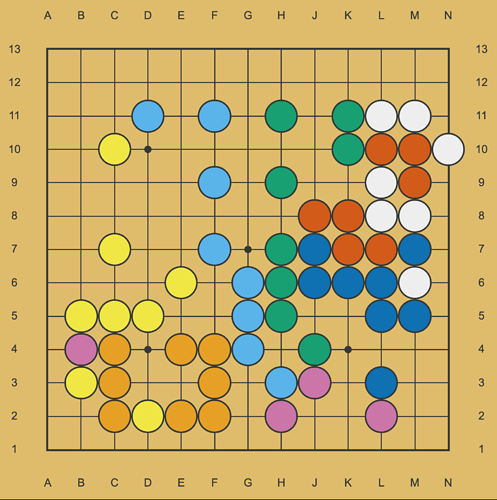 Welp, that was unfortunate 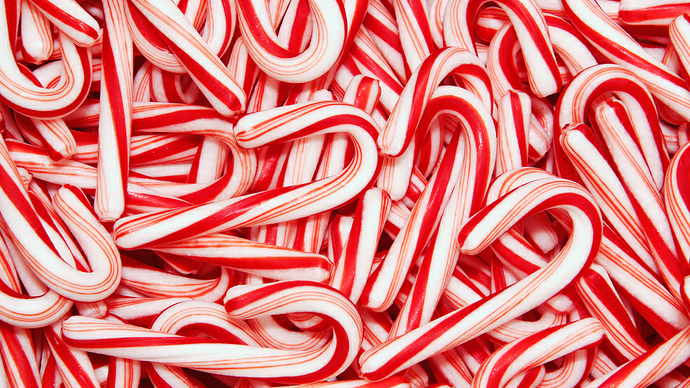