Even the game master frowns upon me.

I don’t frown upon you, I frown upon deleting messages in a correspondence game that is about diplomacy and thus heavily relies on communication. Some of the players may not have been online to see the messages. This is the public game thread, and all messages posted here should be read by all players of the game.

To be clear, I would act the same with other players deleting messages.

I asked Martin in private to restore the messages, but it seems the system does not allow to do so. I acted as forum mod in assisting in restoring those messages, but as game master in deciding that messages should not be deleted.

I think it is well within the purview of the Game Master to set such communication standards for the game. It’s just a practical convenience that he is also a moderator that is able to implement some actions.

In the absence of a move submission from @martin3141, Round 17 will be extended 24 hours.

I feel terrible and I apologise for everything I wrote. I do not know how to continue now. I neither want to just abandon the game and inconvenience all participants, nor do I want to be part in intrigues and the likes anymore.

Don’t overthink it martin. No harm no foul. Noone has taken offence in what you said.
One of the two songs I got my name from is the following one: 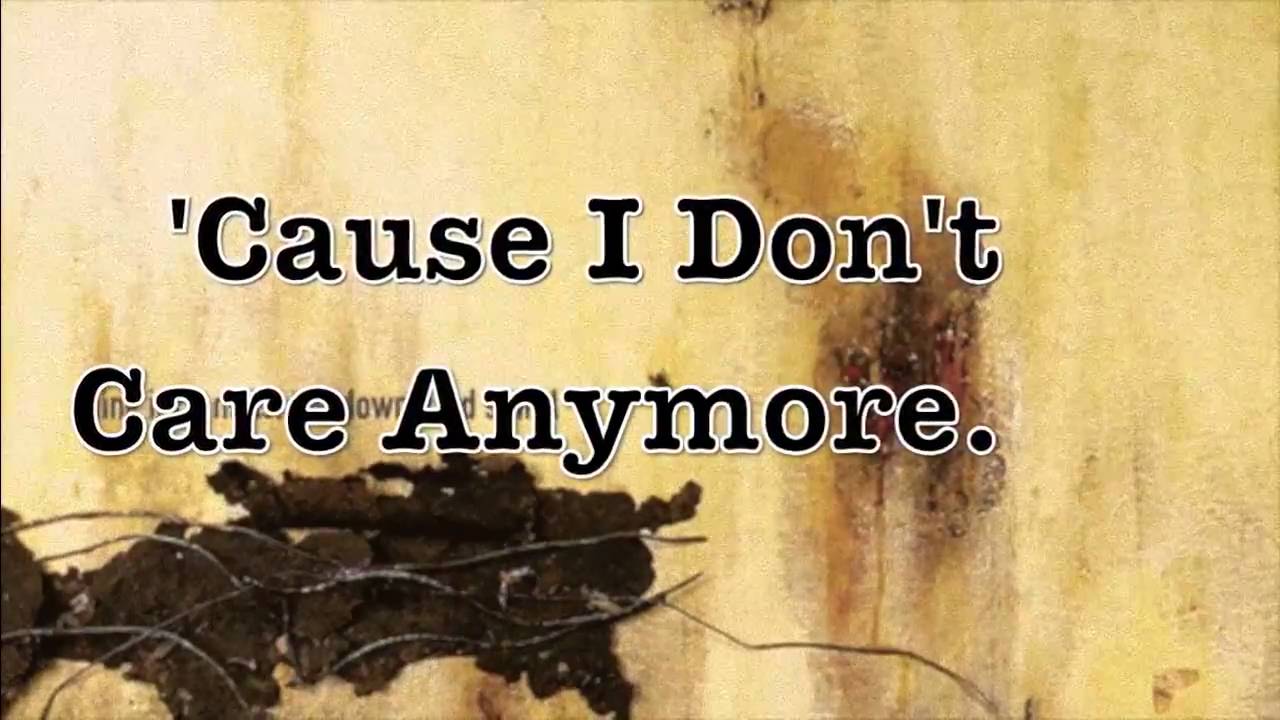 It motivates me, when I’m feeling like shit, to hear these words: “Nothing can stop me now, cause I don’t care anymore”
It helps a lot when I feel like I care too much.

@martin3141 has issued a standing pass from this round onwards, and thus has not placed a move.

@Sanonius collided with each other for their first choice.

@Leira managed to play their second choice, while

@Sanonius did not, since their second choice collided with the stone placed by

@Haze_with_a_Z as a first choice.

@Sanonius did manage to play their third choice.

@martin3141’s stone at B1 is the only stone without liberties, it is removed from the board.

Any player with 5 stones or less on the board is eliminated at the start of Round 18.
All players enter Round 18 with at least 6 stones, therefore nobody is not eliminated. 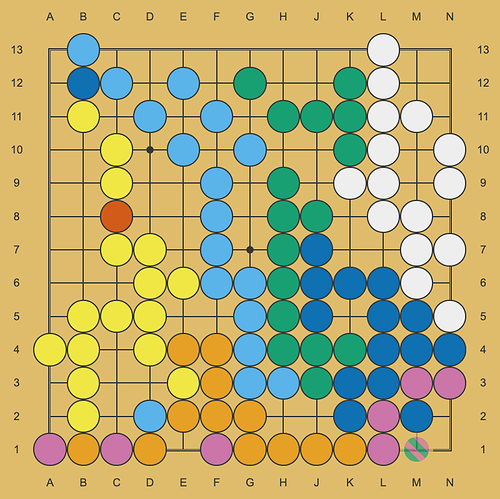 In order not to be eliminated at the start of next round, a player needs 6 or more stones on the board.

Round 18 starts with the following position. 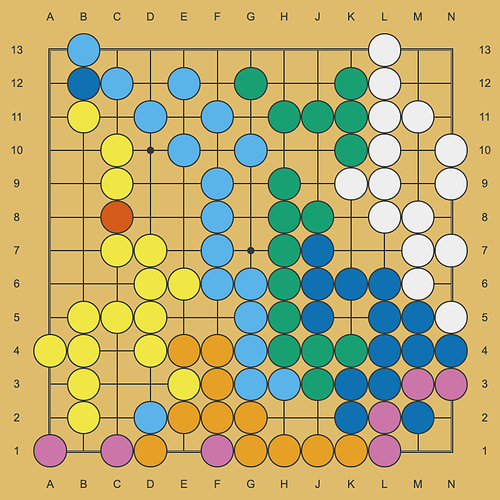 If anybody wishes to continue playing as

Orange, please make yourself known to me.

It appears Martin has tossed the towel into the ring, and does not feel like playing on. I have contacted several players to ask for replacement, but I’m failing to find anyone who is not in the kibitz thread already… If you’re reading this and feel like joining the game, please let me know.

I am sorry for letting everybody down. I wasn’t able to appropriately process the situation emotionally.

You’re not letting anybody down

Being betrayed and/or teamed up on can be very painful, even if it’s “only a game”. Some people may be better than others at separating fiction from reality, but this might be more of an intrinsic trait than a learned skill, so taking a “fictional” betrayal personally shouldn’t be considered a failure of character.

I think this is a serious problem for the game, and something important to consider for the future. I’ve never played diplomacy and I’m not familiar with the customs of that community, but someone (don’t remember who it was right now, possibly yebellz?) linked some notes on diplomacy strategy before the first game, which I read with great interest. This particular quote stuck with me:

[This strategy] lost me a friend and got me some accusations of cheating, but this is par for the course for a good Diplomacy game

This is quite an extreme notion, that losing a friend over a game can be seen as a normal part of the game. There’s not anything wrong with people choosing to play a game like this (as that post demonstrates, there’s many lessons to be learned which can also be applied outside the confines of the game), but as a conflict-averse person I would prefer my games to be as safe from “real” conflict as possible.

Of course one can’t guarantee this completely. People can become angry over any game, regardless of the number of players, the amount of luck, etc. But some games are more likely to breed conflict than others. Players might be upset when they lose in regular go, but feeling betrayed, or that the opponent used an unfair strategy, is less common since it’s easier to define what is and isn’t allowed (and the game is adversarial by nature, you’re fighting against each other throughout the game, so there is no moment of betrayal).

It might be possible to modify the rules of diplomatic go slightly, to make it more “friendly”. For instance, if we imagine a variant without the SAS-element, where players move one at a time, two eyes would be enough to guarantee life. Cooperation and betrayal would still be important aspects of the game, but there would be less death on the board. I’m not saying I would prefer this variant, it’s just an example on how a small change to the mechanics could affect the diplomatic feel of the game a lot.

As a more practical suggestion, I think it would be a good idea to lean into the “role-play” aspect of the game even more, to clarify the boundaries between game and reality. If we consistently talk about “The Sky nation” rather than the player yebellz, that might reduce the risk of conflating the two. In a particular game, we might stop trusting a nation after a betrayal, but we should try to keep that separated from the trust of the real person that is playing.

After yebellz great initiative at the beginning of the game, most players decided on a nation name, and we used some formal language while introducing ourselves. But naturally many of us have slipped back into referring to the other players directly during the game. Since I have renewed belief in the importance of this separation, I will try my best from now on to clearly indicate in my posts when I am talking as a real person, and when I am talking as a fictional nation.

(This whole post falls in the former category. I’m not seeking to affect the outcome of the game in any way with what I’ve written here, I only wish to improve the playing experience for myself and others.)

@Sanonius’s stones at M3 and N3 are all “old” stones without liberties, and thus removed from the board.

Any player with 5 stones or less on the board is eliminated at the start of Round 19.
All players enter Round 19 with at least 6 stones, therefore nobody is eliminated. 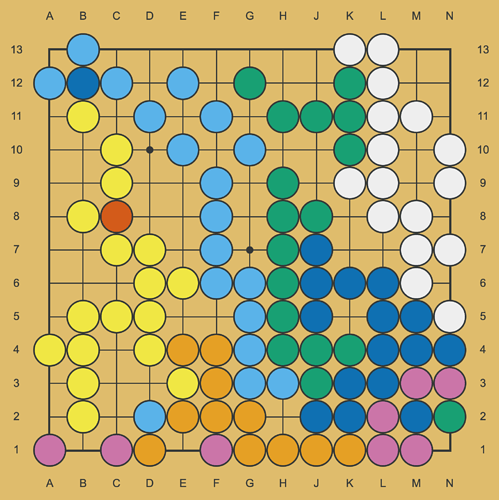 In order not to be eliminated at the start of next round, a player needs 7 or more stones on the board.

Round 19 starts with the following position. 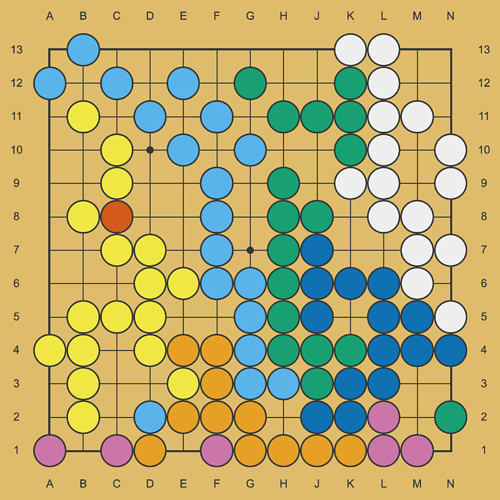 Glad to see Leira continuing my legacy of taking our time

orange stone at D1 is the only “old” stone without liberties and thus is removed from the board. This gives the “new” stones at E1 and F1 a new liberty, and thus these are not removed.

Any player with 6 stones or less on the board is eliminated at the start of Round 20.
All players enter Round 20 with at least 7 stones, therefore nobody is eliminated. 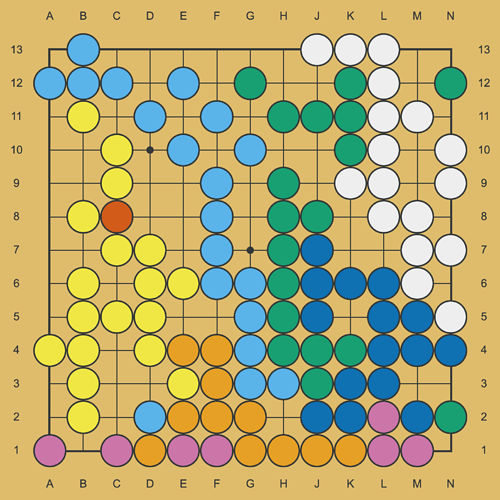 In order not to be eliminated at the start of next round, a player needs 7 or more stones on the board.

Round 20 starts with the following position. 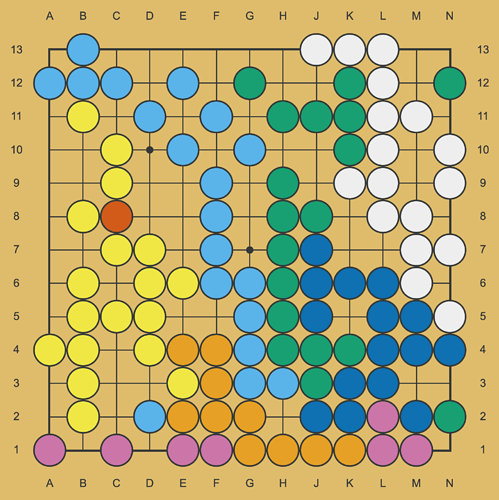 All players enter Round 20 with at least 7 stones, therefore nobody is not eliminated.

Double negatives are not unambiguous.

Oh my, how long has that been there… Must be since Gia was eliminated!

Several stones are captured. First of all the stone at C8 is captured. Second, both

@Sanonius’s group of stones around L1 and

@Haze_with_a_Z’s stone at M2 are “old” groups without liberties, and thus are removed. This gives the “new” group at N1 a new liberty, thus this stone remains on the board.

Any player with 6 stones or less on the board is eliminated at the start of Round 20.

@Sanonius is eliminated this round, since they start with only 5 stones remaining on the board after the capture.
All other players enter Round 20 with at least 7 stones, and therefore are not eliminated. 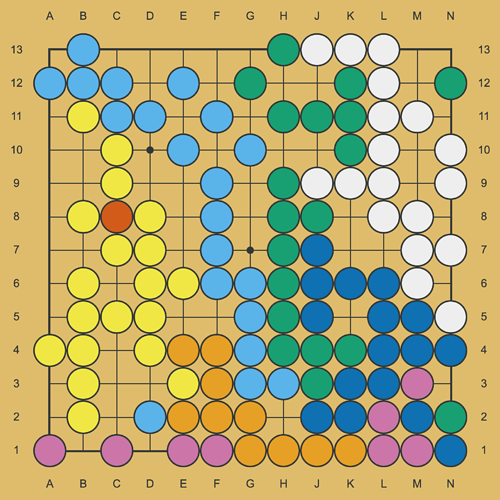 In order not to be eliminated at the start of next round, a player needs 8 or more stones on the board.

Round 21 starts with the following position. 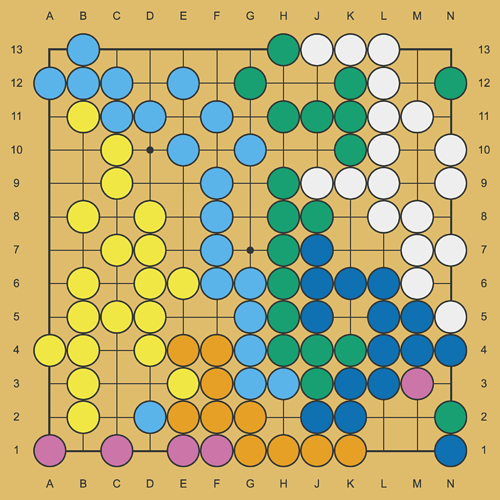 GG @Sanonius, thank you for playing!

So long, everybody! That was fun, I’m excited for the next game of backstabbing.

@Sanonius, thank you playing. Well played, especially for taking over a difficult position!