so then every group is technically new and in atari. do they all die?

Could you clarify what you are trying to ask with diagrams? I don’t see how blue playing at G3 (in the bottom right) has any relevance. Further, the number of stones involved in each group is not important. It comes down to whether each chain has liberties and whether is it “new” or “old”. What do you mean by atari? Traditionally that means a chain with one liberty. A chain needs to have zero liberties to be captured.

idk if it was explained

See the first post in this thread where the rules are detailed. However, please ask questions if there are some things that are unclear. You can also ask questions via PM if you are concerned about tipping your hand in the current game.

In your scenario, all groups would be “new”, and thus nothing gets removed in the second stage, which means that all three groups are removed in the third stage.

To illustrate simultaneous capture in isolation, something like this could happen: 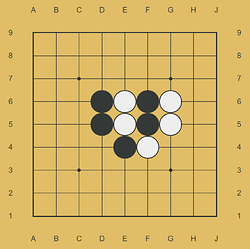 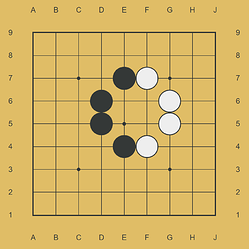 And to illustrate the prioritization of “new chains”, this could also happen: 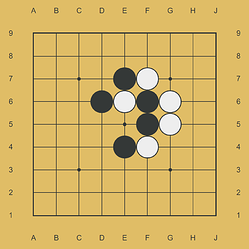 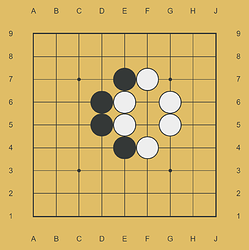 Note that the stones placed on the board are exactly the same as in the previous example, but which stones were placed last is different. In this case white’s two stones that were captured before are “new” so they survive longer than black’s two “old” stones. 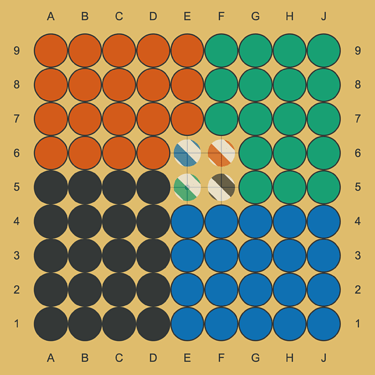 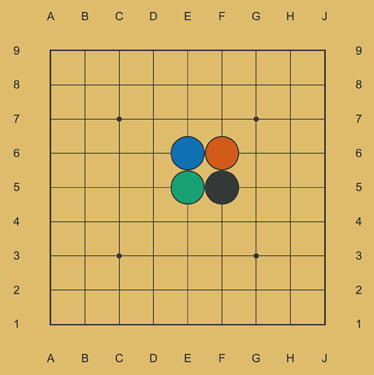 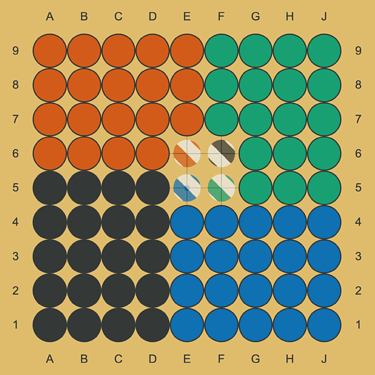 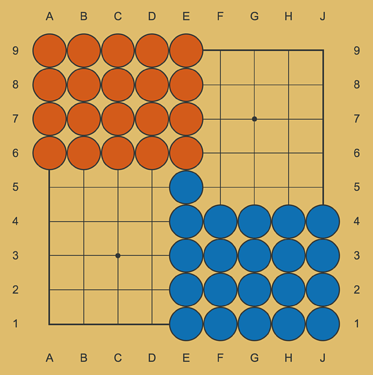 I think the green stones should be alive in the last image?

In the second stage the black stones in the lower left get removed, all other groups are still there in the third stage. Thus only the blue and red groups have liberties, while the green group and the black stone at F6 do not.

I don’t think I can see a section about scoring in the rules. Would it be area or territory type scoring? It is there as area and it’s kind of implied with eliminated players losing anyway.

I was just curious because since players can get eliminated by not having any stones in an area scoring they’d have no points but in territory with prisoners counting as points you could have a way for eliminated players to still win if they had enough points. I think something like that can happen eg in the four player chess variant they have at chess dot com. [Maybe I would like to be part of the kibitz thing if only to read it

How would you decide whose prisoners they are? Stones are captured through people working together, with chess the captor is easily identified, but with go it’s tough.

Well in some instances it would be clear when only one person plays the capturing move.

Capturing happens in three stages: Suppose the three players play the following (marked with white stripes) stones: [image] The first stage is placing all the moves on the board. Any connected set of stones of the same colour that contains one stone placed in this stage will be called “new”. The board now looks like: [image] The second stage removes any connected sets of stones of the same colour that aren’t “new” and don’t have any liberties. This would mean the A8 and A9 stones in the e…

Extrapolating from the examples, in step two of capture, old groups with no liberties are captured, and the most recent (just played stones) that took part in the capture of a different colour group count as capturing said group, those colours receive the points for capture.

That is stones played this turn which have reduced an old group in step 2 from a positive number of liberties to zero will receive points for the capture.

In step 3 new groups with no liberties are captured, again stones played in this turn which reduced the liberties of new groups (of a different colour) from a positive number of liberties to zero, (including a one stone group just played) gets points for the capture.

I think breaking it up into stages like you do anyway and dishing out points in stages with newly placed stones being the ones to ‘claim’ captures could work, but feel free to post counter examples! I think it might also incentivise people to work together to capture groups if they can both receive points from it (other than say just possibly eliminating a player in some cases - could also lead to some funny double crossing potentially).

Re chess, there’s a funny thing where the game continues after one person gets mated but it’s only the last person providing check that gets points for a mate, imagine the instance of double check but the king can’t move out of check. (I think anyway https://youtu.be/JrRVm9lRpfM - apparently there are situations where multiple players gain points at once like with somebody resigning)

I think it’s too confusing and potentially controversial to credit captures to particular players.

Consider the standard two player game, where instead of counting captures as +1 point for the capturer, they can instead be counted as a negative point for the other player. Indeed, manual counting over a real board often just fills in territory with captures. Further, if both players play the same number of stones, counting captures is equivalent to counting stones left living on the board.

However, the biggest reason to use area scoring is to avoid the incredible complexities of resolving life and death, as would arise under territory scoring. Under area scoring, deciding upon life and death is possible by playing out an encore to actually capture all killable stones, if disputes arise. Under territory scoring, playing on to settle disputes does not work so cleanly, since playing out captures also fills one’s own territory. 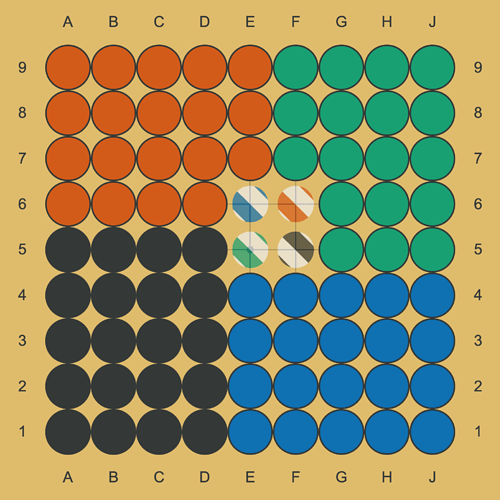 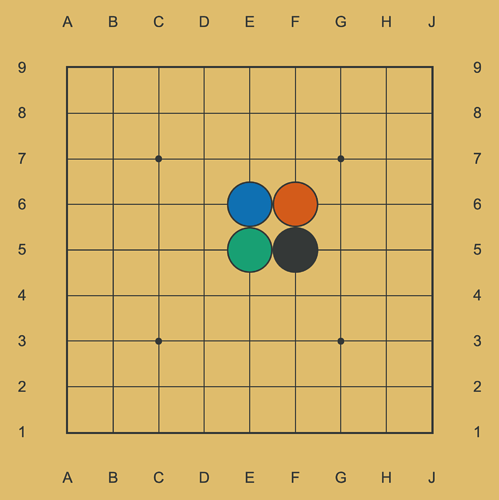 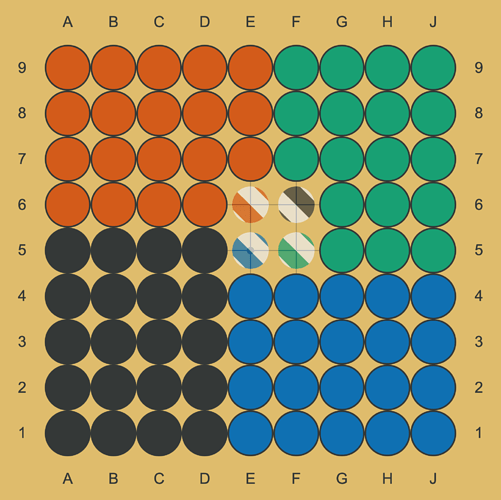 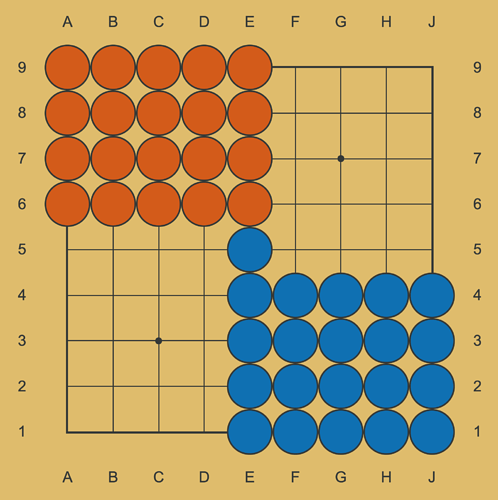 I’ve been lurking this thread and the gameplay one for a while and damn, @yebellz I’m freaking impressed that this works. Huge brain variation. I’m down for a 13x13 game 2 if it happens.

@Haze_with_a_Z
I don’t think that’s legally possible. Suicides are illegal and the capture of any stone requires the placing of a new stone.

On a related note, what if everyone lost all of their stones on the same turn?

In this unlikely event, everyone loses, although we could let the players immediately start a new game, if they wish, including resetting the round counter and extra days.

Can I please get an invite to the kibitz thread?

Me too, I find myself checking these threads regularly

Just to check: There’s no ko rule, right? The round immediately after a ko has been captured, it can be recaptured?

Also, I’d like to suggest an amendment to the situation that occurred just now with HHG playing their first move on a position that was already occupied (which I assume to be a mistake). This is a very reliable way to always give yourself a “first” move in everyone’s second round. I don’t think this is fair, as it makes it too easy to capture things without too much coordination.

My suggestion is to have moves that collide with existing stones (from the previous rounds) be discarded completely, hence in this case count HHG’s first move as C7, since the one they asked for was invalid.

On the other hand, under my suggested amendment, if B and C wish to capture, B needs to play their first move to capture, and C needs to find some way to reliably collide with another play D to make sure their second move will be a capture. This is significantly harder to pull off, of course, and it therefore preserves a bit more of the blocking of captures that made (for me) SAS Go interesting: being in atari is not the end of the world, since you can often block the capture from happening with the same move that will give you more liberties.

Note that this rule doesn’t change the way the game has been played up to this point.

There’s no ko rule, right? The round immediately after a ko has been captured, it can be recaptured?

Right, there is no typical ko rule, but I think the cyclical shapes can be a bit different than usual. Basically, there are no prohibitions in causing a local repetition, and such local cycling could happen indefinitely, if the other players are playing elsewhere causing the whole board position to change. Two players locked into a local cycle might eventually be compelled to break away to address developments elsewhere.

However, I did include a rule to immediately end the game if the whole board position repeats three times (does not have to be consecutive). This is just to ensure that the entire game is not locked into a cycle. Note that if such a thing occurs, all remaining stones left on the board would be treated as alive. I don’t think that aspect is ideal, but I’m not sure how to properly handle life and death disputes in such a situation. This would force players to kill off their opponent’s dead stones before committing to a repeatedly cycling the entire board. Hence, that also makes playing a stone elsewhere as a sort of ko threat, since ignoring it while repeatedly cycling the whole board would result in that stone remaining alive (and potentially ruining territory).

I’m not sure if my rules for dealing with cycles are ideal, so I would be open for suggestions/revisions, which could even be immediately adopted, if there is unanimous consent from the players.

My suggestion is to have moves that collide with existing stones (from the previous rounds) be discarded completely, hence in this case count HHG’s first move as C7, since the one they asked for was invalid.

I do not want to make such a rule change. It was fully my intention to make it possible to easily collide in order to throw away one’s first or second choice. This does make cooperation more effective, allowing two players to execute the moves that you described. I think if two players are ganging up on a third, they should have the ability to press their numerical advantage like this. Without this provision, the team of two would need to get yet another player involved to reliably set up a collision.

For future games, I was even considering the possibility of introducing a “support” mechanism to make cooperation even more effective, however this will need additional hashing out and discussion.

Note that this rule doesn’t change the way the game has been played up to this point.

I’m not sure that’s necessarily the case, as such hypothetical considerations about this type of situation may have impacted past actions. Further, I think this mechanism may impact immediate and short-term considerations, so it could be disruptive to ongoing plans to make a rule change now.

However, that being said, I’d be open for making rules changes if there is unanimous consensus from ALL players to adopt a change. If there is any opposition, I think we should keep the status quo.