Does anyone have a link to best explain the concept of Aji?

As the title says. I’m struggling to properly get my head around the concept of Aji.

I’ve read the Wikipedia page about it. And I think I follow the broad term, it’s about potential merits of threats, right? But I’d like something more in depth so I can actually utilise it in a game. Like, the whole game is about balancing potential threats. What is Aji compared to that? What makes Aji specific?

Did you read this? Aji at Sensei's Library
However, “learning to use aji” is not simple. Tactics can be quite diverse.

I agree. It’s a good concept to know, but nothing that could be ‘learned’ by itself. (And I’d argue that in many cases aji will be practically non-existent if not backed up by good reading skills.) Also, @NoobishFun I think at 15 kyu it is far to early to worry about this. Not to early to come across the concept of course, but I’d bet a lot of money that recognising and utilising aji is not the most efficient way to improve for you. I’m about 10 ranks stronger and it is still a very fuzzy concept for me.

[Aji] is still a very fuzzy concept for me.

Isn’t that due to the nature of aji? One can “smell” there is something, but it’s nothing concrete.

Isn’t the key thing at our level to avoid ajikeshi?

Sensei's Library, page: Aji keshi, keywords: Go term. SL is a large WikiWikiWeb about the game of Go (Baduk, Weiqi). It's a collaboration and community site. Everyone can add comments or edit pages.

And not to get confused between sente and ajikeshi. It’s tempting to play moves which we think are “sente” because our opponent must respond to them but in fact we are just losing some aji or wasting a ko threat or similarly not actually getting an advantage out of our move.

In a lot of cases it’s mainly that stones on the board can still be used even when they’re probably captured. Some fill liberties, some can be used to threaten to live, or connect or save, and that might help accomplish something else.

Other cases it’s just that an area is still big or open enough to try something, live with a group, jump in and escape, or make a nice reduction etc.

If I may amplify what @teapoweredrobot and @shinuito have said, avoiding aji (possibility) keshi (erase), in other words destroying the possibilities in a position, is the most important thing to know about aji at the kyu level. DDKs and weak SDK, for example, tend to want to make themselves safe by closing off a situation, such as closing a boundary on the edge of the board, or by trying to save a dead or near-dead stone. Leaving aside the fact that a bigger move is probably available somewhere else, destroying the aji in those situations is wasteful. When you close the side, you strengthen yourself, but you also strengthen the opponent’s side of the closure if they respond in kind. When you try to save a near-dead stone (an action that will probably help the opponent to build), you are wasting the possibility that the stone might become more valuable later depending on the larger situation, or you may be throwing away a ko threat. So, if you have a stone caught behind enemy lines, as often happens in some josekis, you can console yourself that it represents aji and may play a role later.

Avoiding aji keshi is hard—I am still struggling with it—and a question always gnaws at me: Where does safety end and aji keshi begin? Well, the fascination of go lies precisely in questions like that. 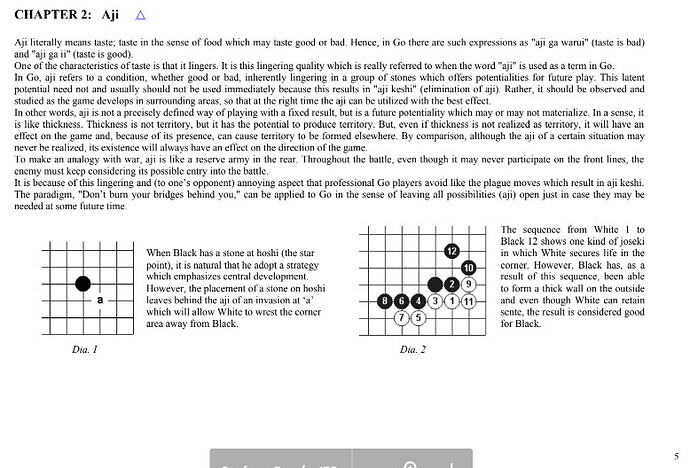 You could check out Strategic Concepts of Go by Yoshiaki Nagahara. It has a chapter on the concept.

Aji is particularly about the possible future ways to play in a position when you don’t yet know which of those various options you want to use. A simple example would be peeping a one point jump: you can peep from either side (or even wedge with lots of support!) but until it’s clear which peep is better you probably shouldn’t play either as it can end up being a thank you move that makes the opponent stronger. It also tends to be used when some of those options are on the cusp of “working”, e.g. the opponent has some weakness, which we call bad aji, but if you directly try to exploit it now then the sequence doesn’t quite work so you end up ruining your potential future possibilities: “aji keshi” (destroying aji). But these weaknesses are often sensitive to things changing in nearby (or even not so nearby in the case of ladder breakers) position, so if you get an extra stone or two here, or the opponent loses a liberty there, then things change and the sequence might now work for you. So when the opponent has some bad aji you don’t directly try to exploit it right now, but you keep it it mind for future play as it is yoke around them that stops them playing as powerfully in future or else the bad aji comes back to bite them in the arse: say they are trying to kill your group running around but their surrounding positions have some bad aji, then you can use this to try to get some moves in sente to help your weak group, or counterattack if they try too hard to kill you. So the bad aji lets you play a bit more riskily because you have more resources to help you.

Here’s an example from a recent game of mine. I’m white, and my opponent played this o18 throw in (after unusual o19 descent) rather than simply n16 atari: if I capture then he gets n16 too and I don’t have a potential eye at o19: 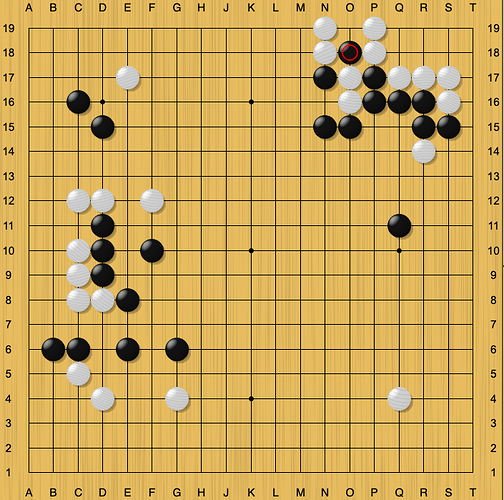 The downside of this greedy play is that black doesn’t have a stone at n16 yet, so for example m16 for white is sente to connect at n16. Playing n16 now would be a terrible idea because m16 isn’t useful yet, but maybe it will be. m17 is also an atari now, maybe that could be useful. And lo and behold 100+ moves later we are having a big fight and black’s try to surround and capture my big white group in the middle (I’ve killed the lower left black but it has lots of liberties so I don’t want to semeai. 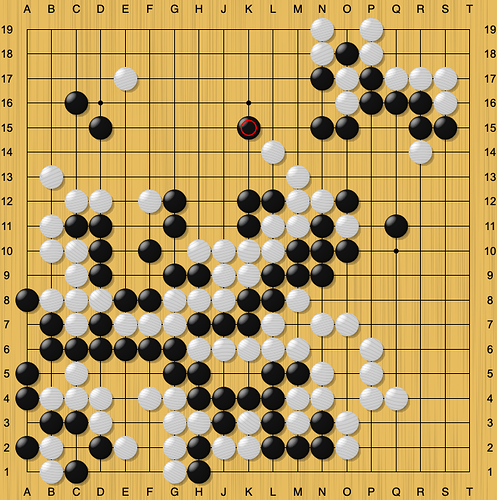 But because of that aji at m16 my group can connect home to safety: 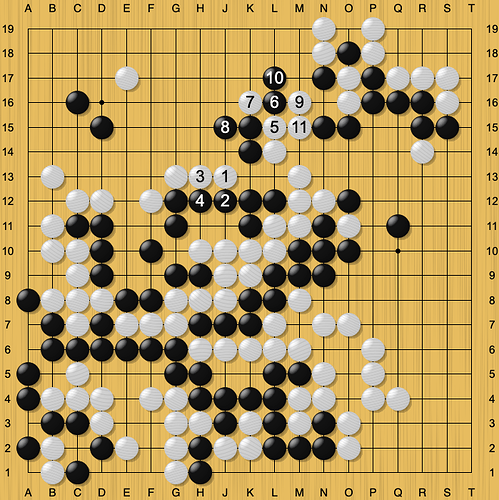 There are some video’s on aji. 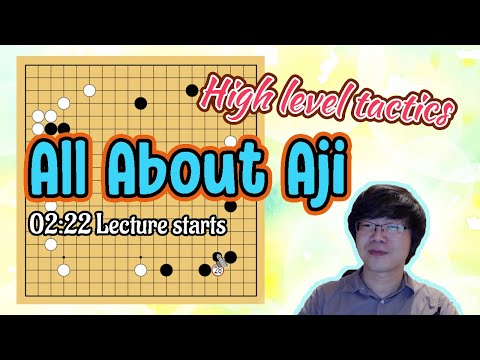 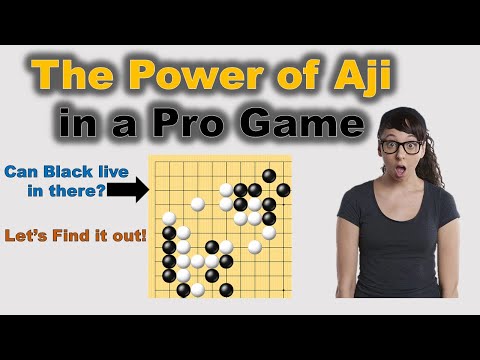 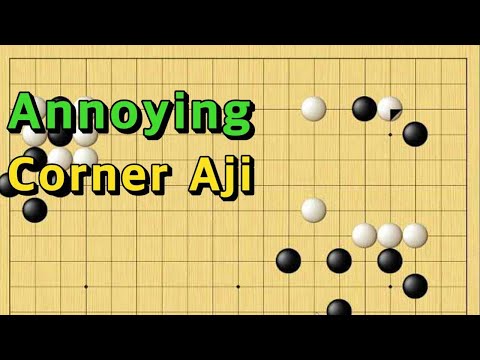 An example of aji and aji-keshi:

This is a common joseki nowadays: 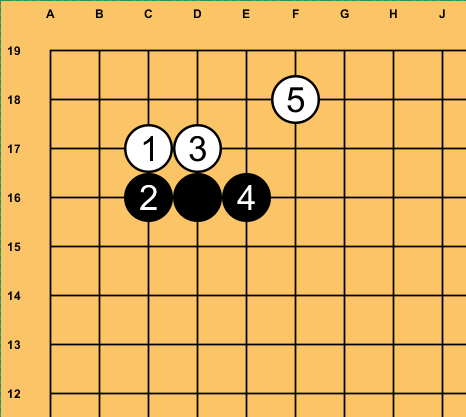 White’s 3-5 shape is called a knight’s move.
An aji-keshi move that is quite common for levels up to about 5k, is to push into a knight’s move, like this: 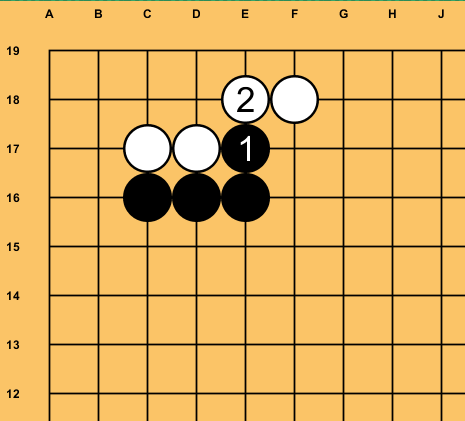 They don’t realise that pushing into a knight’s move loses the aji of “striking at the waist of a knight’s move” with E18. Exploiting that aji is actually one of the proper continuations from my first diagram: 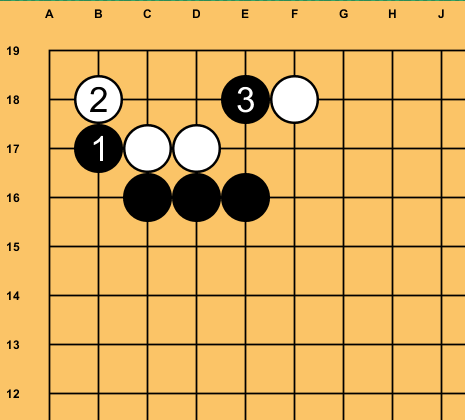 Going into the details of these variations would go too far, but you can check some of it here if you’re interested.

Thank you all for your responses. There’s too many comments to reply to individually (Though I would like to, and might on a few). But you’ve all given excellent ground work for me to further explore. Much appreciated input

Books put out by The Ishi Press (like Cho Chikun’s “All About Life and Death” and Hideo Otake’s “Opening Theory Made Easy”) define aji like this:

And here’s a nice excerpt from Basic Techniques of Go by Haruyama Isamu and Nagahara Yoshiaki:

I don’t think so. It’s more specific than that: aji has to do with stones that were played sometime ago in the current game, and their effect was either completed, or, more likely, abandoned (such as becoming a lone stone surrounded by an opponent moyo). Suddenly at a particular move, the old abandoned stone or stones seems to come to life with a really good effect (such as a ladder blocker or to help create life for an isolated group). That’s aji, I’m pretty sure.

My SDK understanding of aji is something like: hmmm, I smell something not safe in that position, something could go very wrong if one plays there and the other doesn’t know how to defend effectively.

So it usually is about bad shape, unconnected stones, weaknesses that can be exploited by the opponent.