Does the game chart showing level and time length take into account board size?

I was looking at two games and while the level of the players was showing them accurately on the chart (they were vertically aligned, more or less) the times were oddly spread apart.

The two games had these:

At these times controls I would assume the 9x9 game would be faster, but that wasn’t the case. Does the time length take into account board size?

That’s an interesting measure. However even in this case it’s inaccurate to say that 5M+5x35s game on 9x9 takes the same amount of time per turn as 19x19 game of the same controls.

I have confirmed, size of board (and thus average time per move) is not affected by board size (total likely number of moves in the game.) These three were captured using the exact same time control, but the three basic board sizes 9x9, 13x13, 19x19. 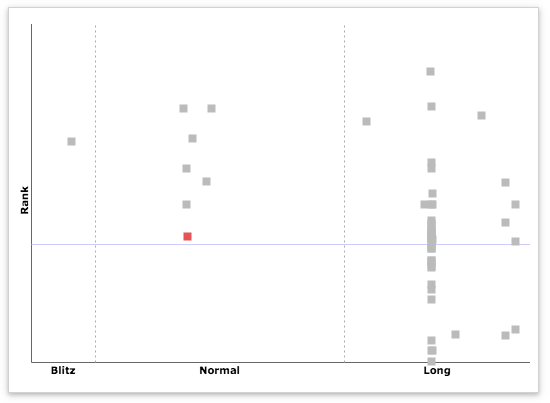 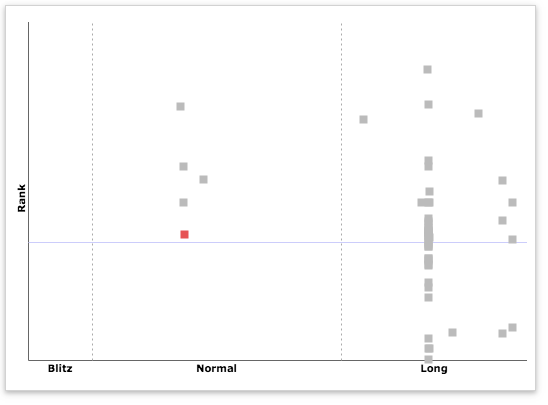 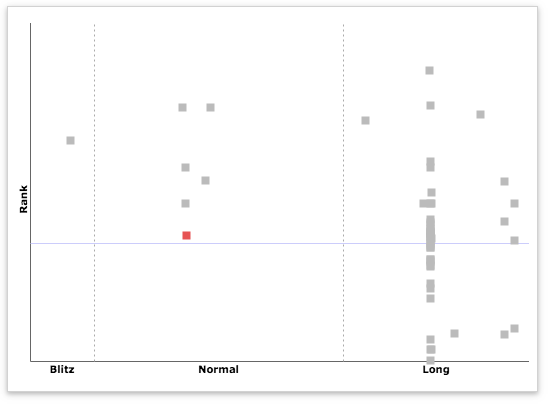 I’ve read this multiple times, but I don’t understand what this is about.

Edit: Ah now I do, thanks for the pictures. I never use it, forgot it even existed.

So, if you assume that “normal time” is used up at some nominal rate, you end up with a game length based on the amount of time played in extra time… in the 35 second periods. Even here there are moves that are obvious and played immediately, so not every move is played out.

However I think we can agree that the total length of these two games, the 19x19 will be longer:

In fact, you might finish the 9x9 BEFORE the need for extra time.

By a lot. TOTAL time played… the 19x19 game will simply take a longer time to play out. Is that what the chart above is trying to show? (Blitz, Normal, Long?) Or is it showing something else?

Ok, I just tried putting a 2x2 game board in with the same time controls… it was in the same spot. It does not take into account the board size for the time axis.

This " seek graph " shows you other people who are looking for games (also referred to as " Open Challenges ").

Challenges are sorted vertically by the strength of your opponent (the higher it is on the screen, the stronger the opponent), and horizontally by the speed of the game. You’ll notice there are three sections, Blitz (games with an average move time of less than 10 seconds), Live (games which have turns anywhere from more than 10 seconds to an hour), and Long (aka “correspondence games”), which are played over the course of many days.

And yes, it doesn’t take board size into account. I tried it with simple and absolute time for 9x9 and 19x19

But the blitz section is then inaccurate, yes?

At these times controls I would assume the 9x9 game would be faster, but that wasn’t the case. Does the time length take into account board size?

No. It uses the computeAverageMoveTime function which assumes 90 moves for each player.

So if that function could be passed the limited number of moves that average for 9x9, then it would give a different answer for different sized boards?

You would probably pass it the board width and height in addition to the time controls.

I don’t know where else in the code that function is used. If it isn’t used much it should be a fairly easy change.

Anyone feel like commenting on that napkin estimate of time differences?

(addendum… Obviously there’s a damn database in this site that could just tell us the real average times. It has enough data.)

@liminal While this doesn’t entirely answer your question, it does look like color will indicate board sizes of ranked games. Green is 19x19, Purple is 13x13, and Blue is 9x9

I know. When I’m looking at the times, I want it to mean, relative to other games, how long this game will take.