I’m trying to upload a SGF file with players whose names are written in Japanese characters (see katrain screenshot). When I try to upload them to a collection, I get a 500 error. The only thing I can think of is that the UTF8 parser barfs because it doesn’t properly handle extended characters.

It does allow for UTF-8 characters, e.g. here’s one of my uploads of a game between Cho Chikun and Watanabe Akira (9d shogi player). So there must be another reason why the upload is failing. Perhaps you could share the contents of the file itself?

SGFs with emoji in names certainly upload fine to GoKibitz.

eg. my game against

Oh - addendum; this is a 500 error, so it’s definitely an error happening on the server-side. I just don’t know what is happening. Here’s what’s in the JS console. 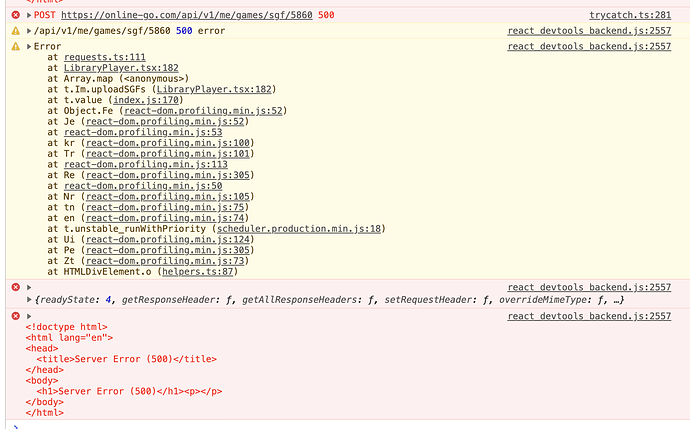 Could the date format be an issue?

In the SGFs that I’ve seen, the date has always used dash separation.

I found the issue: the sgf contains the following handicap information: HA[授先], while the system needs an integer there to give the number of handicap stones. If you remove that from the sgf it should upload like normal.

If this is the sgf that’s outputted by katrain, it may make sense to ask its maker, @sanderl, if this is intended behaviour.

Also, I guess @anoek may want to know this as well

It’s not on Jisho or Wiktionary.

I have no idea. Maybe 1-stone handi? “giving sente”? Now I’m curious to know how close I was.

I think it is “giving sente”, ie. a one-stone or “no-komi” handicap, yeah.

This is not output by katrain, no, though katrain was OK with opening the SGF.

If you’re adding handling for wonky SGFs, another thing to be aware of is that SGFs downloaded from Fox Go server represent 6.5 japanese komi as KM[650], and chinese 6.5 komi and 7.5 komi respectively as KM[325] and KM[375].

(So, for Chinese rules but not Japanese rules, they use the traditional half-counting where 1 unit = 2 points, but for whatever reason, they multiply all komis by 100 when writing it to the SGF).

It’s not in any dictionary I could find, neither Japanese nor Chinese… I’ve asked my girlfriend, who doesn’t know either, seems like a mistake.

Also, note that this game is from 1839, there was no komi back then, so it being 1 handicap doesn’t make sense either.

When I said 1-stone handicap, I was thinking of the old handicapping system of giving the weaker player black more often.

At that era, it means the weaker side always plays black (and the strength difference is 2 rank)

For the time being I’ve dodged the problem by finding these SGFs where work was done to translate them to English, aaaaand should you be curious, I welcome you to click here. Play Go at online-go.com! | OGS

Well, like I said, if you remove HA[授先] from the file, they should work fine

it looks like it was re-saved with katrain, which just leaves wonky fields wonky.
katrain tends to have reasonable defaults and some hardcoded fixes, as chinese servers are the worst for respecting the sgf standard