Hello. I’m brand new to Go. I’ve been watching youtube videos and my question remains: If I’m white and I block off four rows from black, why doesn’t black just play inside of the “white area?” Thanks.

Group needs at least 2 eyes to live. If black thinks he will not be able to create 2 eyes inside white territory, he will not try.

As @50_kyu said, it’s not enough to just plop a stone inside your opponent’s area. That stone itself has to grow large enough to surround space of its own, or it will be considered dead.

Who says he wont? Btw 4 rows is quite vague terminology here.

But if you plop a stone into your opponent’s area, he will have to use up his own pieces to surround you, giving him fewer points in the end, right? Because his pieces would consume points he would have had.

maybe you could give us some example of what you really mean? I don’t think it is clear enough…

if you plop a stone into your opponent’s area, he will have to use up his own pieces to surround you, giving him fewer points in the end, right?

well, no, not really. (let’s say we are talking about japanese rules, to be clear.) If there is just a few opponent’s stones in your territory that do not have two eyes they are considered dead and you do not have to surround them completely. They are your captives. If you put a stone in your opponents territory and he reacts with placing a stone there as well the score stays the same. (1-1=0) He gets a point for a captive, but loses one point for territory. If however the stone you placed there has no chance of living (making two eyes) or capturing something… opponent will not react and gain a point for a captive.
. Does that answer your question?

Well, no. Then the game would be kind of pointless. The rule is that the stone is considered dead once both sides concede it can’t live. What you’re talking about is a kind of disagreement where one side thinks they can live and the other thinks they can’t. That’s very normal and it’s part of the game.

So your opponent plays inside your territory. If you think she can’t live inside you would pass, and if you were right about that, your opponent just gave you an extra prisoner for no reason. If you think she CAN live inside on the next move, then you would just play near the stone so that living is impossible again. Then, when the stone is counted dead at the end, neither player lost anything in the exchange.

I made a demo game to try and explain it better. I remember having the same question when I was starting out - let me know if you have any questions. I also added a few comments to address this. Check out the alternative move 25 after you finish the top line.

And because I like confusing beginners let me just add that everything mentioned above this post applies to Japanese rules. (which seem to be the most popular here at OGS)

There are many rulesets of go with some slight (or sometimes even major) differences. With Chinese rules for example you do not get any points for captives nor do you lose points by playing in your territory. Therefore with Chinese rules the problem you have would not exist.

“If you put a stone in your opponents territory and he reacts with placing a stone there as well the score stays the same. (1-1=0)”

But what if he has to put down four stones to surround that one stone?

He doesnt need to surround it like that to kill it though, if the stone cant make two eyes its dead. 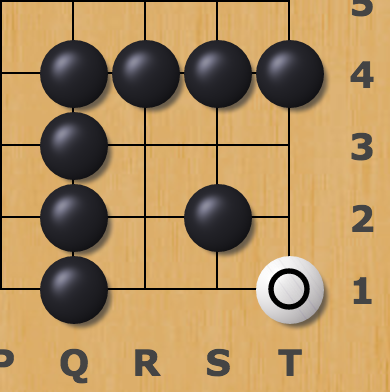 ^Let’s imagine a corner looks like this. Obviously, white can’t make two eyes in this space, so black has no need to play S1 and T2 to remove it from the board. It’s already “dead.”

After both players pass at the end, a “Remove Stones” prompt will appear. During this time, both players would agree that T1 is dead, and it would count as 1 point for black.

If white disagrees, he/she can go back to the game, but then it’s white’s responsibility to prove it’s alive by playing more moves (Black will just keep on passing otherwise).

This gets us back to a 1 kill - 1 territory = 0 situation, or if black is able to pass more times and still kill, black begins gaining points.

Where can I find the Chinese rules?

Very well,
just this one time I will refrain from being sarcastic and giving you the link to the google page

(yeah, in all honesty it is kind of difficult to find a clear and short page about this) and I will try to share some usefull links.

wikipedia offers a basic and understandable description
and sensei of course offers a nice comparison, but some understanding is expected as a pre-requisition.

I will try to sum it up for you and maybe someone more skilled will then correct my mistakes:
in Chinese rules (what you need to know without some minor details):

Therefore playing in your own territory changes nothing. (stones are counted together with territory)

But I do not think you need to bother with different rulesets. As far as I can tell you seem to understand Japanese rules. The only problem you were not clear about is that you DO NOT need to completely surround all the stones in your territory for them to be counted as your captives. That’s it. No need to bother with all the different details.

If you wish, send me a friend request or a challenge and we can play a game together and you can ask away about everything that is not clear enough to you :-). It is always better to learn from experience than trying to understand theoretically.