I don’t really know what words in English I could use to describe this phenomenon but sometimes the rendered image for one goban goes with kind of empty or transparent stones.

It only happens on miniatures and very seldomly.

It never survives a page reload.

I use Firefox on Android.

How often does it occur for you? Is it useful to file a bug for it? 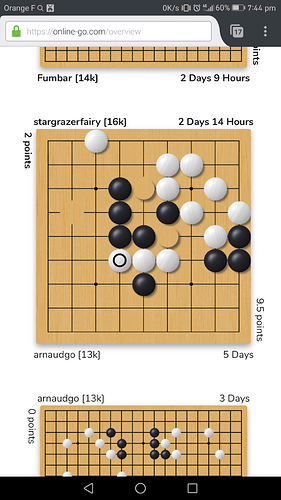 That’s very strange, first I’ve seen of it. Can you tell me what color those we supposed to be?

In the earlier OGS version, this effect always occurred if you changed the percentage view, say from 150% to 100%, or vice versa. In addition, the lines of the board would be disrupted. So it’s not a new problem related to the update. Your new version seemed to correct this, because it was the first thing I checked when you launched. However, I just now checked and found that the view scaled okay when going from 100% to 150%, but it created these ghost images on some random stones when going down from 150% to 100%. I hope this helps you. I suggest people decide on a percentage view and not deviate from it.